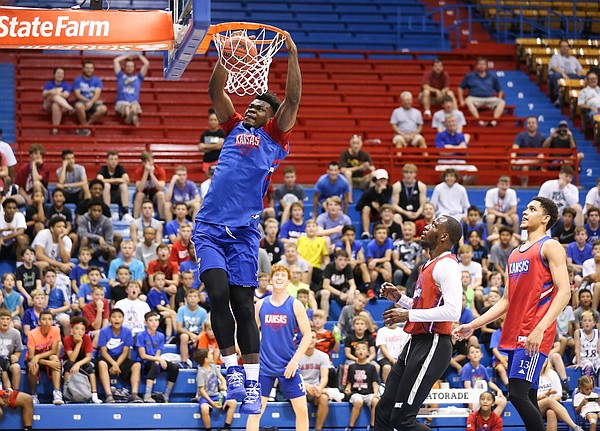 National college basketball analyst Jon Rothstein has more than a few Kansas Jayhawks on his radar this preseason.

As part of his tour around the country in which he assesses the preseason teams and names to watch in each conference, Rothstein dug into the Big 12 on Monday, bringing one third of the Jayhawks’ roster into play during his look at the best of the best in the Big 12.

As you might expect, it started at the top.

In addition to labeling the Jayhawks as the preseason favorite in the conference, he also pegged KU senior Udoka Azubuike as his pick for preseason player of the year.

Rothstein is not alone in thinking this way. Back in April, after it was announced that Azubuike would return to KU for one final run, ESPN broadcaster Fran Fraschilla told the Journal-World that, “If he’s healthy, he automatically becomes the leading candidate for player of the year in the Big 12.”

Beyond that, Azubuike appears to be in better physical condition than ever, with recent social media posts of videos and pictures showing his new physique and more agile movement on the court.

There’s little doubt about what Azubuike can bring the Jayhawks in the paint. A big, bad body that’s hard to move and likes to dunk everything as hard as he can is on the top of every college basketball coach’s wish list every offseason. But if he can add to that staple the ability to play more minutes and go longer stretches without getting into foul trouble, it’s easy to see how his size alone could translate into big numbers that could be tough to beat out for the Big 12’s top individual honor next March.

In addition to the POY nod, Azubuike also earned one of the five spots on Rothstein’s preseason all-Big 12 first team. Joining him there was KU point guard Devon Dotson.

This is another no-brainer pick if you ask me. And Dotson could be in line to give his teammate a run for his money in the player of the year voting, as well.

Dotson will no doubt be the player who makes the 2019-20 Jayhawks go. And with his speed, toughness and attack-first mentality causing problems for opposing defenses on just about every possession, Dotson should be poised to put up even better numbers than he did as a freshman.

No arguments with any of those five here.

After those obvious categories, Rothstein added four more lists, two for freshmen, one for breakout seasons and another for impact transfers.

The Jayhawks had four players on two of those lists and were shutout on the other two.

Junior forward Silvio De Sousa was among Rothstein’s 10 breakout Big 12 players during the 2019-20 season. No explanation was given, but seeing how De Sousa is eligible again and made quite an impact as a one-semester freshman two seasons ago, it’s not hard to see how someone could expect a big season from De Sousa, who could fill any role from fifth starter to first man off the bench.

Jalen Wilson, Tristan Enaruna and the newly committed Dajuan Harris were three of the 10 players on Rothstein’s list of 10 impact freshmen. And that may surprise some of you, given how much was made of KU not signing a player ranked in the Top 40 per Rivals.com in the 2019 recruiting class, it should be a great sign of the potential possessed by this class.

That’s particularly true with Harris, who I continue to hear could wind up being an absolute steal by the time he’s playing and becomes a regular contributor. I wouldn’t bank on that being this season, so Rothstein may be a little off there. But if he wanted to make his list work, he easily could plug in freshman Christian Braun for Harris and not be far off.

Braun had a fantastic summer and his versatility and athleticism cannot be overlooked. I realize that having four Jayhawks on a list of 10 impact freshmen might have been a bit much, but I don’t think it would have been off base at all.

That brings us to the final two categories — Five under the radar freshmen and 10 impact transfers.

Rothstein did not put any Kansas players on either list, but he easily could have. Braun, simply by the fact that he did not crack Rothstein’s list of 10 impact freshmen, certainly could qualify as an under-the-radar freshman. And Isaiah Moss, the grad transfer from Iowa who will report to campus later this month, probably will end up being one of the 10 biggest impact transfers in this conference by season’s end.

Not only does the shooting guard from Chicago have a chance to be among the conference leaders in 3-point percentage, but he also could play a much bigger role on this KU team as a defender and scorer than many people may be projecting.

Time will tell, of course. And you can’t blame Rothstein for not including seven Jayhawks on these lists. That might have seemed like a bit much. But would anyone really have been all that surprised?

Moss seemed like an obvious choice to me. I’d think he could end up being a top 10 transfer in the nation not just the conference.

The biggest challenge for Moss as well as the freshmen could be beating out their own teammates for playing time.

I hope Coach lets him take a few jump shots when we are up 15 or so later in the game. It's more for him as a player than for the team, but will need that for the draft.