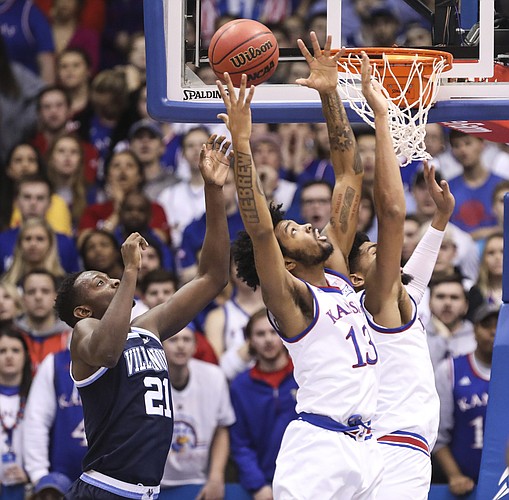 It’s been on the schedule for a couple of years and was merely folded into the new initiative between the Big 12 Conference and the BIG EAST.

Still, next season’s KU-Villanova game in Philadelphia will be the headliner in the inaugural Big 12-BIG EAST battle, which will take place in December, with specific dates and times to be announced later.

The Big 12 Conference revealed the matchups for the rest of the challenge, which will feature all 10 Big 12 teams facing the top 10 teams in the BIG EAST, in the same way the Big 12 and SEC wage their challenge every season.

The matchups were jointly determined and include four games that were previously scheduled. According to a release announcing the pairings, the home school will have the right to determine the venue of its game, with broadcast rights of the games being determined by the home team in conjunction with the national television rights agreement in place for each conference.

The two conferences have signed a 4-year agreement, which will run through the 2022-23 season, with an equal number of games played in each conference’s home market each year.

The 2019-20 KU-Villanova matchup, slated to take place at Wells Fargo Center in Phily, is the second leg of a home-and-home series between the two college basketball powerhouses. Kansas won the first matchup this past season, 74-71, in a rematch of the 2018 Final Four battle and a meeting of two nationally ranked teams at Allen Fieldhouse.

Because that game was not part of the challenge, it’s conceivable that Villanova and Kansas could face off one more time in the second edition of the deal between the Big 12 and the BIG EAST. But no future matchups have been set at this time.

Would like to see a B12-B10 challenge. Roy used to play Indiana when they were good but after they fell of the radar we rarely play them. We could have padded our all time series record against them if we had scheduled them during the last two decades.

So is there still big xii SEC next year? We get UK at home, right?

Nothing says College Rivalry more than a bunch of private Catholic schools and a bunch of midwestern state schools. Can't wait to go to St. Johns and show them what our Adidas money has paid for!

If there was ever a sign that we belong to the worst conference ever, this is one of about 100.

Sounds like shoegate has you really bent out of shape but worst conference ever? Try keeping it real. Hyperbole is not helping your argument.

Sheesh! Get over it already! Nike is in the same boat, it just came down to who they wanted to go after. If you think Calipari is clean or Coach K is clean then you are truly delusional.

Whether they're "Clean" or not, I think they may get UK on some thing but I would be shocked if Duke were actually found guilty of anything. Not because they're clean (I think Williamson should be Exhibits A and B), but because it's Duke. And yes, I also get that it's the FBI instead of the NCAA doing this investigation. I just think they have too many powerful friends and alum to be punished. Especially after that alleged rape case fell apart so spectacularly.

I'm not buying that argument. It would require too many people turning a blind eye to the situation.

The conversations between Adidas and KU make Duke look suspicious but if no conversations between Duke and Nike exist where is the evidence to implicate Duke? Hopefully a money trail can be found that links Nike to the Williamson family but If Duke walks it might be because they did a better job of cheating.