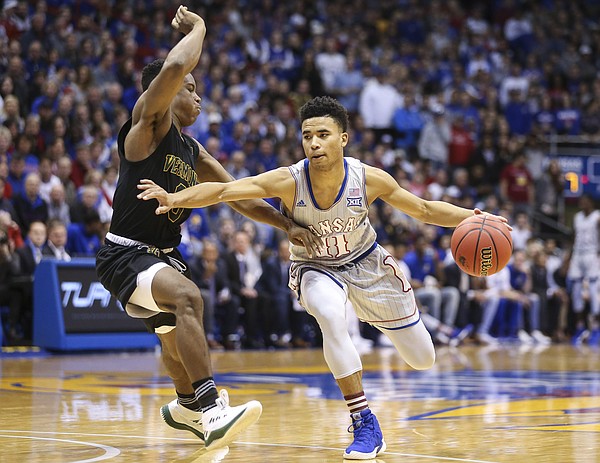 The next step has arrived for Kansas point guard Devon Dotson.

According to Dotson’s father, Dana Dotson, the KU freshman who finished as the Jayhawks’ fourth leading scorer and led the team in assists and steals during first season in Lawrence, has received an invitation to the NBA’s pre-draft combine, slated for May 14-19 in Chicago.

Dotson, who has spent the past couple of weeks working out in The Windy City in preparation for his shot at the combine, was one of four Jayhawks to throw his name into the draft pool before the deadline, joining Dedric Lawson, Quentin Grimes and Silvio De Sousa.

All four now have decisions to make and skills to showcase and each is taking advantage of the new rules that allow underclassmen to declare for the draft, hire an agent and yet still return to school if they desire. The deadline to pull out of the draft and return to school is May 29.

Whether you’re a lottery pick with a multi-million dollar future or a fringe player just trying to find his way into the draft, the decisions that are made leading up to team workouts, the combine and the June draft can be stressful, intimidating and overwhelming.

But that’s not the case for Dotson, who is moving forward with the idea of improving as much as possible and showcasing his skills to get accurate feedback from NBA folks about his chances in this summer’s draft.

Sure, the stakes are high and the situation is serious. But Dotson is looking at his current circumstances with a best-of-both-worlds view.

“Yeah, yeah. It’s a win-win scenario,” the 6-foot-2 point guard who earned all-freshman honors in the Big 12 this season said after the Jayhawks’ season-ending banquet earlier this month. “I feel like I can’t lose from this situation that I’ve put myself in and I feel like there’s no negatives to the process.”

Shortly after Dotson declared for the 2019 draft, his father told the Journal-World that his son was on “an information-seeking quest.”

Dotson confirmed as much during his recent meeting with the media and explained in a little more detail exactly what he was looking for from the next few weeks.

“Just feedback from NBA personnel and getting the feedback of where I’m at and things I can get better on,” Dotson said. “I’m taking the process very seriously and just hoping for the best.”

The full list of combine invitees has not been released and the process has changed a bit from years past. What used to include a total of around 70 combine participants now has been expanded to include invitations to likely G League candidates and alternates, as well.

Dotson, Grimes and Lawson received full combine invitations and De Sousa was invited to the G League combine, which also will be held in Chicago May 12-14, during the three days leading up to the main event.

Considering the June draft includes just two rounds and 60 picks, there clearly are some tough decisions ahead for a bunch of draft hopefuls.

"According to ESPN.com draft expert Jonathan Givony, this year’s early-entry list included 233 prospects, 175 college underclassmen and 58 international players. Considering the June draft includes just two rounds and 60 picks, there clearly are some tough decisions ahead for a bunch of draft hopefuls."

I am sure we call can do the math equation on this.

I am also sure the last sentence of "some tough" decision was hard to type with a straight face.

These are not hard decisions for the Jayhawks invited.

They probably shouldn't be, but far be it from me to say what's tough and what isn't for these young men and their dreams and futures.

I think you'd be surprised how hard it is for some of these players at programs big and small — even the ones who obviously have very little shot of getting drafted — to admit that to themselves.

My question is for a guy like Dotson who may come back, if he's been in Chicago the past couple of weeks working out, how is he even a student at this point? How is he keeping up with classes to stay eligible next semester if he does come back? Since he got the invite, he'll miss the last 6-8 weeks of school I'm guessing? I just don't get that part of the equation. Hope he comes back, hope he's still eligible.

The short answer is this: The academic people at KU are very good and experienced at building schedules to help manage these types of situations... From online courses and lighter loads in the spring semester, the players' schedules are set up well in advance to ensure that they remain in good academic standing while working toward some of these other things that come up.

This story, about Lagerald Vick, has a little more insight into that...

KU coach Bill Self says senior Lagerald Vick should be remembered 'in a very favorable way' by Matt Tait KUsports.com
3

"The academic people at KU are very good and experienced at building schedules to help manage these types of situations." You forgot to add "For star athletes." ;-) I'd love to just be an 'old bitter crank' about this but I doubt it works that way for regular 'paying customers'..

I worked a full-time job the final semester of my senior year and was able to manage my schedule in a fashion so that I still took 12 credit hours and didn't miss work. In addition to that, since I worked multiple jobs throughout college for extra spending money plus worked on the football staff, I often was able to find night classes or online classes so that I could get my degree and receive a minor in business. But yeah athletes always get it easy and regular students can't find ways to make it work.

Jeff, thanks for asking that question. And Matt, thanks for answering it. I've always wondered about that... players who never step foot on campus again after the NCAA tournament. I still wonder if those intent on going pro even take classes during their last semester.

And Brian, you're not the only bitter old crank out there. But at least I didn't have quite the pressure and schedule these athletes do. My only problem finding time to study was between trips to the Hawk and the Wheel.

I think the reality for Devon...a player who I LOVE...is that he's going to be a GREAT 4 year college player. He'll have options after that. Maybe not NBA. But he can play professionally and make a good living doing so. Look at Keith Langford, he's done quite well for himself overseas.

We'll be lucky to have Devon for 3 years though 2 is more likely.

Agree fully with Dirk and also think Dotson will have a nice NBA career, especially if he returns for another year of development.

I agree Dirk. I've been telling others on other various KU sites that Devon will be back for his Soph season. I feel this yr the reason him going through this process is like he stated - just solely getting information on what area's he need to work and improve on. - Although Devon had a very solid year there are things he can work and improve on. - he is simply trying to find out from the NBA officials what those might be. - I think he needs to tighten his handles some , at times he had periods where he was kind of loose with his ball handling - -he needs some work with his outside J better consistency , working to be able to create off the bounce his outside J. If you look back a lot of his 3 pt attempts were wide open 3's where he had time to catch plant and shoot. - Needs to work on being able to get his own shot - -like off the bounce. - Devon is a really good player , he comes back, works on his game and has another very Solid year - then I say like you after next year all bet's with him are off. - - I think Devon will be here for the 2 years , at worst case scenario for him 3 years. - Devon will not be here for 4 years. - - -ROCK CHALK ALL DAY LONG BABY

The entry process for the "fringe players" also makes it tough for the college coaches who are trying to prepare for the upcoming season(s) without the knowledge of whether or not those player(s) may be returning and taking up a scholarship. It has to be tough to wonder whether you have 2, 3, 4 or 5 scholarships to give, and also for the potential incoming kids to wonder what their role may be if a current player declares, but then returns. I'm wondering out loud if changing the dates for commitments from incoming freshmen--(perhaps set a 14-21 day range that falls after the combine), and or, the dates to withdraw from the draft wouldn't make a clearer path for both coaches and recruits...and early delcarees.

He is going on a fact finding mission. He will take what the scouts say he needs to improve on, and then come back to KU and work on those areas and have an even better Sophomore year, then probably be gone. If, and I say again IF he blows them away, then he leaves this year. Like he said, it’s the best of both worlds and a win, win situation. I just hope they don’t offer him a spot on the G League and he takes it. I believe the G League is paying 6 digits

And thanks, Matt, for making us all feel better about the academic integrity of the University.

Devon will be back -- - back - - back - - back -- back - - the NBA has multiple studs that think they are NBA ready - then get that slap of what's called reality - they got work to do - -NBA has all kinds of studs that don't make the grade. - Devon is a really good player but has work to do. He WILL be back to improve on those area's - THEN like I said all bets are off after next year if he shows more improvement in those area's. Like he said it's a win win for him , at least he knows he has things he needs to improve on and is using this as an informational experience. - -ROCK CHAL ALL DAY LONG BABY

Devon will be back for one more year and that's it. This kids a stud and will be prove to be the best PG in the Big12 and if we get Hampton, watch out!

I wish Q had this same mind set to go there and get info, maybe go, but certainly stay if the info points to that. But everything I've read about Q makes it sound like he is gone no matter what.

I don't want him to come back. He was horrendous and there is no reason to expect him to all the sudden live up to expectations in year 2.

So, are there 233 prospects invited to the combine, 70 for the NBA and 163 for the G-League? Confusing Matt.

233 put their name in the draft, 60 will get drafted, the rest better have a backup plan.

Putting their name in the draft doesn't mean they get invited to the combine (what this article is about). Those not invited almost certainly won't get drafted. Those invited are at least on the radar of NBA teams.

Players that are close to being accepted need to consider now even if undrafted or another college season hoping for a 1st round pick next year. If Dotson isn't a cinch for 1st round he can earn that next year with a great 2nd year of college basketball. As for Grimes some believe Dotson has a better chance than Grimes. Presently none of the KU prospects are listed on 2018 potential draft lists.