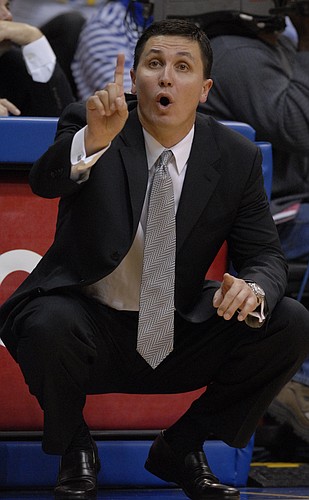 Former KU guard Rex Walters, now a veteran of NBA and college coaching ranks, has been named to the staff at the University of Nevada Reno.

Walters will operate as a special assistant to Nevada coach Eric Musselman.

Walters most recently worked as an assistant to former Detroit Pistons coach Stan Van Gundy but lost his position when Van Gundy and the Pistons parted ways.

“When we started the search for this position, we set a few parameters that were important to our program,” Musselman said in a news release. “First and foremost, we wanted to find someone who had prior head coaching experience. This trait has been something that has served our program both on and off the court very well. We also wanted to find someone that had NBA playing and possibly coaching experience, and with Rex, we were able to accomplish both. Since the moment he stepped on campus, he has hit the ground running. We are extremely excited to add Rex's basketball knowledge and acumen to our staff. He is a tremendous asset to our staff and program as a whole.”

Walters' head coaching experience comes from his time as the leader of Florida Atlantic and University of San Francisco programs, where he worked for a combined 10 seasons, finishing with a record of 157-158.

Walters also has assistant coaching experience at Valpo and FAU and also was the head coach of the Grand Rapids Drive in the NBA's G League before making the jump to the NBA sideline.

In addition to his coaching adventures, Walters, who once played a small part in the movie Blue Chips, recently started a podcast, Real Talk Basketball, which already has attracted several entertaining guests, including Van Gundy and former KU coach and current North Carolina leader Roy Williams.

Good luck Rex Walters. I truly enjoyed your playing career at Kansas. I wish you all the best in this newest employment venture.

Rex was one of Uncle Roy's stars, leading KU to the final four in '93 and playing in the NBA for seven years. I really enjoyed watching USF play while he was their head coach, remindful of the KU teams he played for, and certainly wish him luck with Nevada Reno.