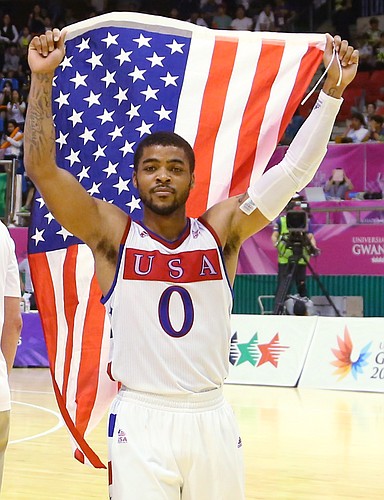 The last time Frank Mason III competed on the international level, he left South Korea with a gold medal and an iconic image of the American flag flying behind his shoulders and back.

Now, the former Jayhawk and current Sacramento Kings point guard is going in for more.

USA Basketball on Monday announced that Mason was one of 14 players vying for a spot on Team USA’s September World Cup Qualifying team, which will compete later this month in the second round of qualifying.

Mason, who played in 52 games for Sacramento during his rookie season, will be joined by Reggie Hearn (Grand Rapids Drive) and Jameel Warney (Texas Legends), two players with previous World Cup Qualifying experience, and a dozen newcomers. In all, 10 of the 14 players played in the NBA at some point during the 2017-18 season.

Former NBA head coach Jeff Van Gundy will lead the team, just one year after guiding Team USA to a 5-0 record and the gold medal at the 2017 FIBA AmeriCup Championship.

Van Gundy coached the U.S. Team to a 5-1 record in the first round of the FIBA Americas World Cup Qualifying event earlier this year. And it’s clear that Van Gundy is looking for players in Mason’s mold.

“With our September second-round games marking the start of the most critical part of the World Cup Qualifying, I think it is imperative for us to look for players who possess mental fortitude, who are tough, and who have experience,” Van Gundy said in a press release. “All of our second-round games are going to be very, very difficult and competitive battles. Argentina, Panama and Uruguay are all really good and well coached.”

Wooo hooo... so happy for you, General!!