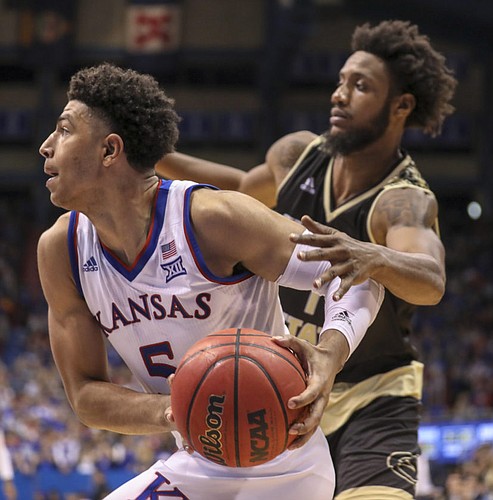 Kansas guard Quentin Grimes (5) drives against Emporia State forward Justin Tucker (1) during the second half of an exhibition, Thursday, Oct. 25, 2018 at Allen Fieldhouse. by Nick Krug

Time for another freshman edition of He Will, He Won’t, He Might 2018 and this time we’re looking at high-profile newcomer Quentin Grimes.

Grimes, the top-rated prospect in the Jayhawks’ 2018 recruiting class who hails from The Woodlands, Texas, is one of the most versatile players on the team and the possibilities are borderline endless for the type of impact he can have this season.

Need a physical player to play the 3? Grimes is your guy.

Need a smooth scorer who can take smaller defenders in the post and pull bigger defenders outside? Grimes can do that, too.

Want to go big and play with a monster lineup? Plug Grimes in at the 1 and let him run the show.

All of that, and more, is a part of Grimes’ repertoire and although KU coach Bill Self has said recently that the coaches would like to see a more aggressive and actively engaged Grimes day in and day out, during every rep, the sky is the limit for the former McDonald’s All-American who enjoyed a terrific All-Star circuit toward the end of his senior year and has a chance to be the next great freshman at Kansas.

Here’s a look at a few predictions for Grimes.

He Will – Start every game this season

As was the case with Devon Dotson, this was written before we saw that initial starting lineup during KU’s exhibition opener against Emporia State. The fact that Grimes was in KU’s first five merely makes this easier to predict.

While this might not seem like that bold of a prediction, it’s worth noting that Grimes’ character is as much a part of this one as his immense talent.

Think back to last season for a minute, when KU starters Malik Newman and Lagerald Vick both saw their names removed from the starting lineup in small spurts because Self was searching for a way to get their attention.

For the most part, it worked, as both responded to their temporary demotions with better energy, effort and all-around play.

Don’t expect to see Self have to do that with Grimes, who appears to be a team player all the way and likely will have no problem doing whatever is asked.

Will he always do it at a high level? There’s no guarantee there. After all, he is still a freshman. But Grimes arrived on campus with the right mindset and the team-first mentality. If there are going to be any messages sent his way this season, they’re more likely going to come in the form of Self and his coaching staff trying to force him to take over more, not as some kind of punishment for not putting in the proper effort.

There are people out there who believe that Grimes has the talent to be one of the best — if not the best — all-around players in the entire country this season.

And it’s hard to argue with that based on skill set alone.

Grimes can do a little bit of everything and he’s so smooth trying to do anything, plus his basketball IQ is high and his competitiveness is right up there with it.

Having said that, cracking the Top 5 in the Big 12 by season’s end is going to be tough. For starters, there are a couple of players on his own team who figure to battle for a spot on the Big 12’s first team next March, with Dedric Lawson, Udoka Azubuike and Lagerald Vick all capable of playing at that level.

Add to that the fact that K-State has two players who are borderline locks to earn a spot, in Barry Brown and Dean Wade, and Iowa State’s Lindell Wigginton might be the most exciting and explosive player in the conference and it’s easy to see how cracking the Top 5 could be tough.

That doesn’t even mention Texas Tech’s Jarrett Culve, West Virginia’s Sagaba Konate or Esa Ahmad, or any of Texas’ talented athletes who, at any minute, could make a major jump.

Grimes figures to battle for a spot on the all-Big 12 second team and almost certainly will get some kind of recognition when it’s all said and done. But first-team all-conference will be tough. After all, Frank Mason III didn’t even get a first-team nod until his stellar senior season and KU has had just 21 players earn first-team all-Big 12 picks in the history of Big 12 basketball, with a handful of them earning the honor multiple times.

The most popular opinion out there is that Grimes is a future lottery pick and likely will be KU’s next one-and-done player.

But I’m not so sure that’s a guarantee.

Yes, he’s got lottery potential, and, yeah, many mock drafts even as far back as this spring have him slotted in the Top 14 of the 2019 NBA Draft. So it’s not his talent that’s in question.

What is debatable is his rush to leave Kansas.

So much of it will come down to what kind of year Grimes has and where his stock sits when it really matters. But heading into his freshman season, I’d say the odds are about as good that he’ll attend the combine, test his status and return to KU for one more year as they are that he’ll leave after just one season.

If you forced me to make a call today, I’d say he leaves. But that’s why this falls under the “He Might” category because a case certainly can be made that Grimes will return to KU to grow his game, take a little more coaching from Self and position himself to actually be more ready for the NBA when he gets there.

Regardless of the guesses and predictions about what he’ll do, Grimes is focused on the right things right now. I’ve heard him asked about the NBA half a dozen times since he committed to KU and each time his answer has made it crystal clear that the only thing on his mind currently is college basketball, helping KU win as many games as possible and improving his game.

Time will tell how it all shakes out, but I don’t think Grimes as a one-and-done is a given.

Going or not so often seems to come down to how __ plays in March/April.