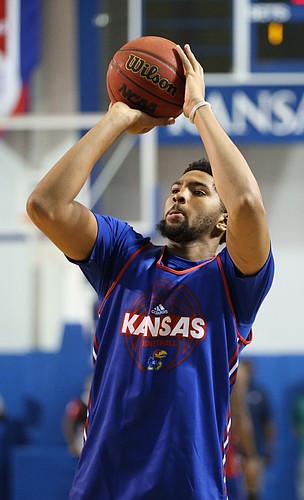 Dedric Lawson puts up a shot during a scrimmage on Wednesday, June 7, 2017 at the Horejsi Family Athletics Center. by Nick Krug

Already slated as a first team all-Big 12 selection and the conference’s newcomer of the year, Kansas junior Dedric Lawson reeled in the biggest preseason fish in the pond on Tuesday.

Lawson, a 6-foot-9 forward who transferred to KU from Memphis, has been named a preseason first team All American by the Associated Press, the AP revealed Tuesday morning.

Lawson, along with his brother, KU sophomore K.J. Lawson, came to Kansas before the 2017-18 season and sat out last year in accordance with NCAA transfer rules.

During his final season at Memphis — his hometown university — Lawson averaged 19.2 points and 9.9 rebounds per game, which put him on the NBA radar and made him one of the most attractive transfers to change college basketball zip codes in years.

KU coach Bill Self has said Lawson is the best passer he has had at Kansas — regardless of position — and also has talked often about running a huge portion of KU’s offense through Lawson, with the junior forward utilizing his inside-outside game and all-around skills to create matchup problems for opponents and open things up for his KU teammates.

“What Dedric needs to do is he needs to be able to play everywhere for us,” Self said back on Oct. 10 at KU's annual media day. “I think he could, at times, be our best point guard. I think at times he could be our best low-post scorer. So we’ve got to move him around and come up with some creative ways to do that.”

Here's a deeper look at how Lawson could impact the Jayhawks this season in the latest "He Will, He Won't, He Might" installment.

Purdue guard Carsen Edwards was the highest vote getter among the six first-team All-Americans (the final two members of the team tied in the voting), appearing on 63 of the 65 ballots. Lawson was the fourth-highest vote getter.

Lawson finished behind Kansas State's Dean Wade in preseason Big 12 player of the year voting. According to the Associated Press, Wade did not receive a single vote

Here’s a look at the rest of the team:

All American takes some luck but he should win Big 12 POY. Not Dean Wade.