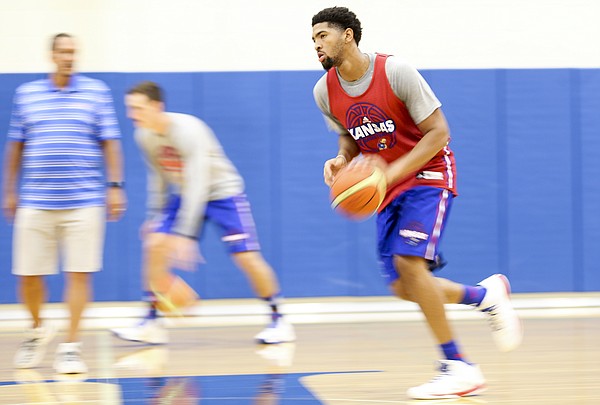 Kansas forward Dedric Lawson (1) dribbles up the court during an open practice on Tuesday, July 11, 2017. The Jayhawks are preparing for four early-August exhibition games in Italy. by Nick Krug

At this point, as long as you’ve been paying attention at all, you know where the expectations sit for Kansas forward Dedric Lawson.

Internal expectations? They’re there. KU coach Bill Self has said they’ll need Lawson to do a little bit of everything for the Jayhawks this year and Lawson himself has high hopes and sees big things ahead during his first year as a Jayhawk.

Expectations from the KU fan base? Well, those are always present and the KU faithful, this time around will want Lawson to be this team’s Marcus Morris, Perry Ellis or Josh Jackson.

Expectations from the media and Big 12 coaches? Yep. Those are there, as well. Just about everybody who has been asked has pegged Lawson as a first team all-Big 12 pick, preseason player of the year, or, at the very least, preseason newcomer of the year.

So now that we’ve covered that, let’s dive a little more into why so many people think Lawson is poised for such a big year.

There’s the obvious of his skills, size and past success. But there are a few things that aren’t so obvious, as well.

He Will – Lead the team in scoring

I’m not going to try to reinvent the wheel here. Lawson should have every opportunity in the world to pull off this feat. And the best thing about it, from his perspective and that of the team, is that he’ll be able to do it in an abundance of ways.

If teams try to shut him down inside, he can step out and make plays — and shots — on the perimeter. If teams crowd him to keep him from finding his jumper, he can take them inside and do all kinds of things down there.

Because of that versatility and his sleepy smooth demeanor, Lawson should have the ball a ton and get it in positions to score, be it inside, outside or at the free throw line.

There’s too much depth and talent on this team to think he might approach his Memphis total of 19 points per game, but somewhere in the 15-16 range should be doable.

He Won’t – Wow you with his motor and energy

I’ve referred to Lawson’s game as sleepy on more than a couple of occasions and will probably continue to do so throughout the season.

It’s not a knock, nor a commentary about his effort, desire or intensity. Instead, it’s a frank observation about the way Lawson looks when he’s out on the floor.

Don’t get me wrong. He’ll have plenty of moments where he flashes some emotion. But he’ll also have a bunch of nights where he won’t look like he did much and then you’ll look at his numbers and be wowed by a line that includes 16 points, eight rebounds and four or five assists.

The laid-back mode works for Lawson and I wouldn’t be surprised for a second if it’s partially responsible for his big numbers because he has a way of lulling defenders to sleep and striking when they least expect it.

He Might – Make a pass you’ve never seen before

Self has not been shy about praising Lawson’s passing skills, calling him, in no uncertain terms, the best passer he’s had here regardless of position.

So, yeah. We’ll go with that for one of Lawson’s “He Will, He Won’t, He Might” entries.

But instead of just saying he’s a good passer or he has good vision or sets up teammates well, I thought it’d be fun to take it one step farther.

I’m not sure what it will be, but I’d be willing to make a small wager that Lawson will drop some kind of pass that you’ve never seen before. Maybe it’ll be off of a defender. Maybe it’ll be over his shoulder and then through his legs. Maybe it’ll go through two sets of legs to get to its desired target.

Either way, keep your eyes open and your head on a swivel because it could be coming and you won’t want to miss it.

I could see Coach running a bunch of sets through him at the high post with the whole court at his disposal and the height to see and pass over just about any D.