Even by Kansas standards, Jayhawks receiving tons of preseason praise 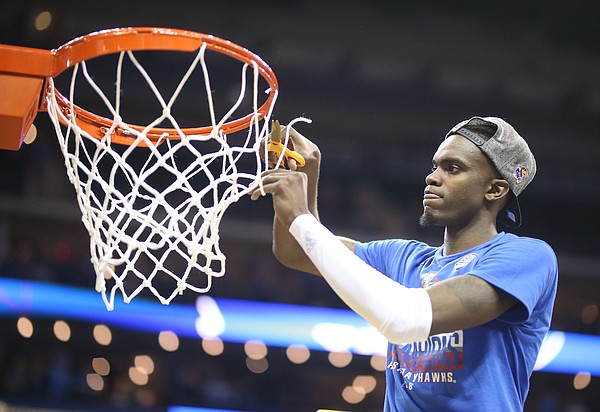 Kansas guard Lagerald Vick (2) cuts a piece of the net following the JayhawksÕ 81-70 win over the Mountaineers in the championship game of the Big 12 Tournament, Saturday, March 10, 2018 at Sprint Center in Kansas City, Mo. by Nick Krug

Whether you’re talking about preseason rankings, player of the year candidates or any number of players or teams who could surprise this season, pretty much everything you want, and then some, is out there for folks to digest.

For fans of Kansas basketball, that means staying busy.

Four Jayhawks already have been named to preseason watchlists for point guard, shooting guard, power forward and center of the year.

The Jayhawks are ranked No. 1 or No. 2 in the preseason polls by nearly a dozen different publications, including holding down the top spot in the eyes of ESPN, NBC Sports and Sports Illustrated.

Famed college basketball analytics guru, Ken Pomeroy, who released his preseason rankings over the weekend, put Kansas in the No. 1 spot, ahead of Duke, North Carolina, Virginia and Villanova.

Including Villanova, which will come to Allen Fieldhouse on Dec. 15 for the first of a home-and-home series with Kansas, KenPom's initial 2018-19 rankings include six KU opponents in the Top 16 and nine in the Top 30.

Beyond that, I have yet to see anyone out there who is picking anyone but Kansas to win the Big 12 for a 15th consecutive year. That includes the conference’s coaches, who, on Friday, revealed that KU was the unanimous pick to win the Big 12 once again.

In many ways, this is all business as usual for Kansas basketball this time of year. But even by Kansas standards, the Jayhawks’ depth, talent, experience and potential puts this team in rarified air entering the 2018-19 season.

Despite what the experts say, the Jayhawks will not have a free ride to anything. The Big 12 Conference has talent — just look down I-70 to Manhattan for proof of that — and winning on the road in conference play is never a guarantee. Add to that a typically tough non-conference schedule that figures to test the readiness of a host of newcomers right off the bat, with games against Michigan State, Marquette, (likely) Tennessee, Villanova and Arizona State on the road all looming before Big 12 play begins in January.

But even with all of those things going for the Jayhawks and the typical roadblocks, along with the distraction of the federal trial into corruption in college basketball, standing in their way, you’ll be hard pressed to find anybody picking against the Jayhawks this season.

Take, for example, the recently released Big 12 preview by Sports Illustrated, which included some heavy praise for the Jayhawks, as a team and as individuals.

In The Skinny, which provides a basic overview of what’s ahead, SI.com writer Michael Shapiro writes, “... the Jayhawks won’t be aching for talent. It’s Kansas’s conference to lose once again.”

Heck, even the title of SI’s Big 12 preview says all you need to know: “Revamped Kansas Still the Team Everyone's Chasing”

In addition to the obvious and easy move of picking KU to win the league, Shapiro pegs Memphis transfer and current KU junior Dedric Lawson as the Big 12 Player of the Year and KU freshman Quentin Grimes as the conference’s Newcomer of the Year.

Don’t just take Shapiro’s word for how good this KU team could be, though. Even the section titled, “Scout’s Take,” which looks at the Jayhawks through the eyes of an anonymous opponent or scout, gushes about Bill Self’s 2018-19 squad.

It reads: “They lose three big shooters on the perimeter, but I expect Kansas to pick right up where they left off... Bill Self will be happy to get back to inside smashmouth basketball... When you run them off the 3-point-line, that’s where Azubuike really hurts you on the lob... Azubuike became a much better passer in the post last season, he may face some double teams this year... Lagerald Vick is the old man but Marcus Garrett is better suited to start... Garrett’s an active and effective defender, he brings them a real energy... Vick’s best value comes as a shooter, doesn’t pose a huge threat breaking you down... Quentin Grimes is the jewel of Kansas’s class. He has size, he can stroke it, and a quality leaper, too... Grimes can get you 30 in a game as a freshman... Devon Dotson is so smooth... Dotson will fill in nicely for the guys Kansas lost, he’s a legit lead ball-handler even with his size... The title still runs through Lawrence, no doubt about that.”

As great as all this sounds and as much deserved as the praise that is being given is, in the back of my mind, it makes me think of the roars of approval for Goliath just before he met David.

If 52 years of Jayhawk basketball starting with my freshman year is any bell weather, it seems to me the more the hype for KU, the more the chance for disappointment increases. Don't get me wrong, this team is very good and has a chance to be dominant, but I just get a little nervous when people begin to make a National Championship into a kind of a done deal.

PS Matt, I didn't me to imply yourself. You have always shown a cautious restraint to extreme reactions in all cases, much to your credit.

Thanks, Tony. Didn't think you meant me/our paper, but your clarification and kind words are appreciated. It should be a fun season and different than the past two years for sure. Enjoy!

And we relax our team way too much in the post sesason according to Kurtis Towsend.

The should have, pregame speech saying “pressure the crap out of the ball”.

Both schools got the same level of little praise. And both won championships.

Praise increase the chance for upsets under pressure.

Not sure why you think these things but there isn't much data to support your claims.

Why: because, even some of the best teams (2008-2012 KU-UK) such as the 2012 UK Wildcats, they could have lost in 2012 have we made one 3 to tie the game and had an and one, that would have been over time dejavu. (History talk) instead of the previous sentence,,we dribbled ball instead of even the three point attempt. Maybe when we were down by three or four in the closing championship minutes, HCBS could have ran the Mario chalmers play and try, night as well. Chalmers didn’t know, 2012 KU basketball team would not have known.

But that was a long time ago

Wish we could win as Favorite, why: Because had we done that earlier, Kentucky most likely would not get most of the credit

Here's to taking care of last year's unfinished business and cutting down the nets in Minneapolis in 2019! ROCK CHALK JAYHAWK!