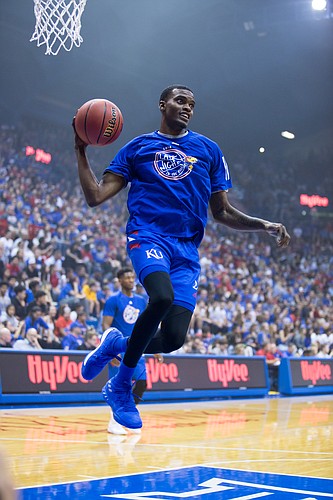 Kansas senior Lagerald Vick flies through the air during warmups for the Late Night scrimmage, won by the Crimson squad, 46-37, on Friday, Sept. 28, 2018, at Allen Fieldhouse. by Kyle Babson

With the exhibition schedule tipping off next week and the regular season opener right around the corner, it’s time to dive into our “He Will, He Won’t, He Might” feature here at KUsports.com.

Each season, for the past few years at least, I’ve throw together a quick look at each Kansas player and attempted to predict one thing he will do during the upcoming season, one thing he won’t do and one thing he might.

Humble brags aside, my batting average for these things has been pretty good, and I’ve always tried to make them a little tougher than just hitting on some obvious stat predictions or leadership angles.

It’s not always possible to be so bold, so I have to take a couple of infield singles here and there, but, for the most part, I try to make these predictions a little deeper reach.

With that said, let’s just right in and start off this year’s series with the lone senior on the KU roster - Lagerald Vick.

He Will – Be this team’s most dangerous 3-point weapon

This might seem like one of those obvious predictions, but, to be honest, it’s the only thing I feel completely comfortable predicting for Vick.

The sky’s the limit for the Memphis senior who elected to return for his final season of college ball after coming oh-so-close to leaving. But before we believe that he will be a reliable leader, a lock-down defender or a more aggressive offensive player, we kind of have to (a) see it and (b) see how he fits in, comfort-wise, to a completely new role.

With 3-point shooting, that’s not the case. Vick entered the offseason as a good shooter, has said he improved his shot from that even and knows and has seen just about every way KU coach Bill Self can draw it up for a 3-point shooter to get a look. So all of that will be incredibly comfortable for Vick. Add to that the fact that KU will have a much stronger scoring presence in the paint and it’s easy to see Vick continuing to get open looks from behind the arc, even with Devonte’ Graham, Malik Newman and Svi Mykhailiuk no longer on the floor with him.

The questions here will be: Can he still knock them down and will he avoid the temptation of forcing up shots just because he’s the most proven shooter on this roster?

He Won’t – Be in the starting lineup on opening night

I know there are a bunch of people out there who don’t agree with me here or, even stronger, think I’m crazy for this prediction. And there’s no doubt that I could be wrong.

But since the day KU coach Bill Self announced that Vick would return, my gut has told me it won’t be as a starter.

In my opinion, this is really a win-win scenario for KU, provided Vick can handle both sides of it. If he starts, KU enters the season with two returning starters from a Final Four team and has the majority of its experience out there on the floor from the jump night in and night out. If he doesn’t, you’re bringing a bona fide weapon and ultra-nasty athlete off the bench in an instant-offense/energy type of role, a luxury that a lot of teams would do anything for.

Even if Vick is out there for the opening tip in Indianapolis on Nov. 6, I still think it’s possible that he’s a part-time starter at best.

But, as you’ve probably read, Self has said that Vick’s attitude has been a 10 this preseason and there’s no doubt that the KU coach tends to lean on players he trusts more often in the early going. A lot of times that means veterans and upperclassmen get the nod. But in Vick’s case, what we don’t know is whether Self has reached the point where he truly trusts one of the more inconsistent players he’s had.

He Might – Have the best rebounding season of his career

With all of those big bodies taking up space and occupying opponents down low, Vick should find plenty of opportunities to make free runs at the rim for offensive and defensive rebounds. The question is: Will he?

Vick actually put up pretty solid rebounding numbers a season ago, finishing third on the team with a 4.8 rpg per averaging and recording 187 for the season. That included 37 offensive boards — a number I think could go higher — and also came in 33 minutes a game.

He probably won’t play that many minutes this year, which means he’s going to have to go even harder to the glass to eclipse the 187 mark that currently represents his career high.

But there’s no doubt that Vick’s athleticism, with a more focused mindset, could lead to more boards even in fewer minutes. All he has to do is get to 188 for this prediction to be right, and that’s just 15 more offensive rebounds (or less than one more every two games) and 14 fewer defensive boards.

In the past five seasons, just nine Kansas players have topped the 200-rebound mark in a single season. So it could be tough for Vick to get there. But if the reasons he returned actually prove to be true — giving himself up for the team, doing whatever Self asks, etc., etc., etc., — it’s not crazy to think rebounding could be an even bigger part of Vick’s all-around game.