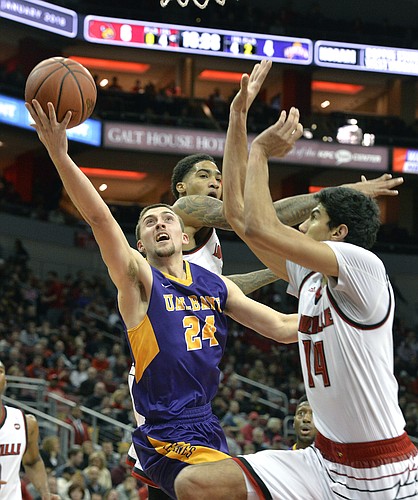 Albany guard Joe Cremo (24) attempts a layup past the defense of Louisville forward Ray Spalding (13), and forward Anas Mahmoud (14) during the first half of an NCAA college basketball game, Wednesday, Dec. 20, 2017, in Louisville, Ky. by Timothy D. Easley/AP Photo

After five visits to some of the best programs in college basketball, University of Albany shooting guard Joe Cremo on Tuesday morning announced that the opportunity to join the defending national champion Villanova Wildcats was too good to pass up.

The 6-foot-4 Cremo, who shot better than 40 percent from 3-point range during his three seasons at Albany, announced his commitment to Villanova via Twitter, saying, "After thinking it over and talking to my family and friends, I've decided that I'm going to be committing to the University of Villanova for the last year of my career. ... I want to thank all the coaches that recruited me throughout this process and invested their time in me. I truly appreciate it."

Cremo's decision to stay close to his Scotia, N.Y., home — Villanova's campus is about four hours away while KU's is about 19 hours away — leaves the Jayhawks with one remaining scholarship to hand out to fill out its roster for the 2018-19 season.

KU coach Bill Self has said throughout the early stages of this offseason that he would like to add another shooter to the roster to help offset the loss of the team's top four 3-point shooters from last season, who accounted for 94.4 percent of KU's 3-point makes during the 2017-18 team's run to the Final Four.

Adding such a piece could be tricky, however, because the Jayhawks, outside of 3-point shooting, have quality depth in their backcourt despite the loss of four starting guards from last season's team.

Finding playing time on a team that likely will play more three-guard/two-big sets than it has in the past two seasons could be tough for a late addition and likely played a role in Cremo's decision.

The Albany guard said in early April that he wanted to go somewhere he deemed to be a good fit, where he could compete for serious playing time. Cremo picked Villanova over Kansas, Texas, Gonzaga and Creighton.

While it seems likely that Self and company will continue to mine the graduate transfer pool in an attempt to fill that final spot, there are a handful of unsigned players still available in the 2018 recruiting class, three sitting in the Rivals150 rankings.

With the KU roster set up well in terms of numbers — potentially six deep in the backcourt and six deep up front if Udoka Azubuike returns and you count K.J. Lawson as a forward — the remaining scholarship could be used in a variety of ways.

They could find a grad transfer like Cremo. Matt Mooney, of the University of South Dakota, and Brock Stull, of Milwaukee, are two names to keep an eye on there.

They could give it to a red-shirt transfer like they did with Malik Newman, the Lawson brothers and Charlie Moore. Remember, transfer numbers are way up these days and continuing to rise. The big center from Florida State (Ike Obiagu) is one of the most intriguing options on that front.

They also could give it to a late 2018 project type of player. They could hold onto it in case the need for it pops up down the road. (Think a 2019 prospect reclassifying or something like that). Or they could go searching for a diamond in the rough and gamble on a player who has not yet received the kind of pub and hype that most KU recruits come with.

The options are plenty. We just now know that Joe Cremo is not one of them.

None by Joe Cremo

Jay Wright is rising on my list of coaches I love to hate--right along with Coach K and Coach Cal.

Wright is light years ahead of K & Cal when it comes to class and quality of man. Don't hate him just because he's good.

Good for him. He probably knows about how well grad transfers work out at KU. He wants playing time. Can't blame him one bit.

Oops, that was one. Evan Maxwell and D Coleby also said hello but just from another university.

Dwight Coleby would have ended up playing 20+ mins a game last year. Oops!

No surprise here. Also, Jay Wright is a classy individual. He's #2 on my list of college coaches behind Bill Self.

If you've got one year, you have to make it count. Villanova is a great program, and they are more likely to have a spot where he can make the most of the time he has left. They had three underclassmen guards declare for the NBA, and unlike KU, they don't have a lot of obvious replacements.

He made a fine choice.

We will see on December 15. Villanova in Allen Fieldhouse!

If Spellman and that white kid stay in the draft, KU should win that matchup..if they both come back, they might beat KU for the 3rd time in 3 years

And we lost to them in nonconference play a couple years ago off Archidiacono's buzzer beater, so it would be 4 straight

Joe wanted to stay close to home, that was a given

this is shaping up top be Selfs worse outside shooting team at KU since the 2004-2005 team..his first season at the helm..that team had Miles (poor shooter), Langford (poor shooter) and Giddons (streaky at best)..guess we gotta hope Dotson and Grimes shoot better than expected or Garrett come back to campus with a dead eye 3 pot shot...its more vital that Dok comes back now since it seems KU will be heavily reliant on post scoring....

I don't blame him for wanting to stay closer to home. 4 hours vs 19 hours is a big difference. But if playing time was the deciding factor, he should show up and put forth the effort to win the playing time. Self plays the best player at each position no matter how long they have been on campus, but he does not promise playing time. He tells them that he will play the people who earn the minutes. It is sad that players today don't want to have to earn their minutes.

I'm guessing the last scholarship goes to a transfer that sits this season.Don't recall us having any for next year and Bill has been consistent with those in recent years.

Obiagu shoots 31% from the free-throw line. Maybe Udoka can help him out.