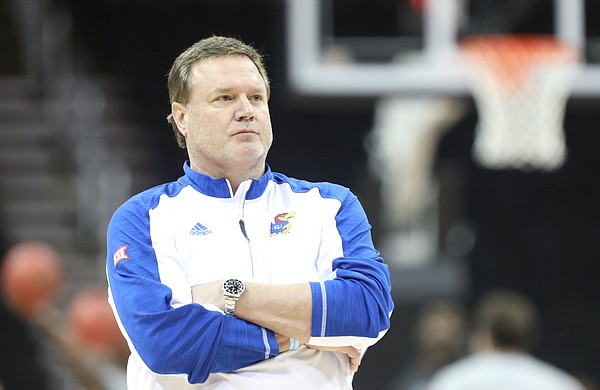 Kansas head coach Bill Self watches over during a shoot around on Wednesday, March 7, 2018 at Sprint Center in Kansas City, Mo. by Nick Krug

As graduation 2018 comes and goes and next season's Kansas men's basketball players head home for a few weeks before reporting back to campus on June 2 for the start of summer classes and workouts, Bill Self's Jayhawks remain in possession of a valuable commodity — an unused scholarship.

Thanks to the departure of five scholarship players from last year's team — six, if sophomore center Udoka Azubuike elects to keep his name in the draft — and the fact that the 2018 recruiting class features just four replacements, KU still has one spot left to fill before the 2018-19 season arrives.

But don't bank on the Jayhawks filling that spot. So says KU coach Bill Self, who discussed his options with the Journal-World this week and said the potential for him to keep the 13th scholarship in his pocket was a “good possibility.”

“Oh yeah,” Self said when asked about hanging on to the 13th scholarship. “Especially because we won't have any seniors next year.”

Because there are no seniors on the 2018-19 roster, there is no guarantee that Kansas will get any scholarships back to use on prospects in the loaded 2019 recruiting class.

With that said, it seems likely that KU will have at least two or three open spots after next season because of the potential for early departures from players like Dedric Lawson, Udoka Azubuike, Silvio De Sousa and Quentin Grimes.

That's not to say the Jayhawks definitely will hold on to the scholarship instead of giving it out. Just last week, KU welcomed grad transfer Joe Cremo to town for a visit — Cremo ultimately committed to Villanova — and Self and his coaching staff remain on the lookout for the right addition to the 2018-19 roster.

Finding that player is easier said than done, however, given the fact that most of the 2018 talent is already spoken for and very few high-major prospects, if any, remain available.

“We'd have to have something fall out of the sky right now,” Self said. “But we could go with what we've got. There's no problem with that.”

The other option for the Jayhawks, as they have shown a willingness to do in recent years, is to take a transfer who would have to sit out the 2018-19 season the way Malik Newman sat out 2016-17 and Dedric Lawson, K.J. Lawson and Charlie Moore sat out the recently completed 2017-18 season.

“That's a possibility,” Self said. “But there's no panic on the deal, though.”

The bottom line, at least as of today, is this: While Self and company would be open to filling the spot if the right player surfaced, they have no plans to use the scholarship just to do it and also feel no pressure to get it done quickly.

While there are players out there who might be considered intriguing options, Self said he and his staff were still in the starting blocks for the few players who are on their radar.

And with Self leaving to coach the U18 USA Basketball team on May 30 through the middle of June, things could be put on hold for a while anyway.

Why is Sam Cunliffe a Junior and not a Sophomore? He has only played one full season (half at Az St and half at KU) with a year sitting out in-between. Doesn't that make him a 3rd year Sophomore? I remember Jeff Withey was able to play 3 1/2 seasons at KU after playing 1/2 a season at Az then transferring.

I've always been confused on Sam's status, too, but I just confirmed it with KU and was told he will be a junior next season...

Jeff never played a game at UA. He just attended classes and transferred in December. This is when Lute suddenly retired. This is similarly why Conner Frankamp transferred in August right before classes started: he could sit out a year, and then have 3 full seasons of eligibility remaining.

Don't think in half seasons. Because Basketball doesn't count half seasons. You play one game in the season, that counts for one season. A player has five years to play four seasons. Withey played 0 seasons for 'Zona and 4 seasons for Kansas. But he signed an LOI which required him to sit out two semesters before he played for Kansas. SDS who didn't even arrive at Kansas until January played a one season out of 4 in the NCAA's view.

That's the best and simplest way to understand how much eligibility remains for mid-semester transfers.

Yep. That's the way I understand it.

That is why many here have posted that he could elect to transfer somewhere for more PT and not lose a year of eligibility because technically even though he sat out two semesters to transfer he never redshirted a season.

Theoretically he could transfer to USC, sit a year, play a year, graduate, then transfer again and play for his fourth team in 5 years.

How sure are you?

Brave talk about Silvio but I am pretty sure there is also a 12th schollie about to be made available for next season if not this season upcoming!!

Let us Pray for a Return to the Premise of "innocent until proven guilty beyond a reasonable doubt"?? I like Silvio alot.

Good luck with that. Those standards have been long gone.

But if found guilty and after playing the majority of the season, all the wins will be forfeited and the losses will still count.

Just too big of a risk. I also like Silvio a lot.

If you play in any games in a season you lose 2 semesters (1 season) of eligibility. Otherwise a player could theoretically play just the second semester of certain years and play 5 seasons. Teams could sit players for first semester and essentially use them down the stretch and in 5 NCAA tournaments for example.