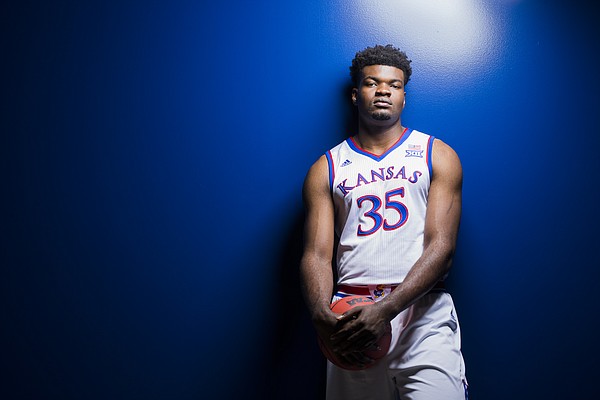 San Antonio — The Journal-World learned Saturday afternoon that Florence Azuonuwu, the mother of Kansas basketball player Udoka Azubuike, has in fact made it to San Antonio to watch her son in the Final Four.

Azubuike's story has been one of the hottest and most heartfelt topics of the week. The KU sophomore has not seen Azuonuwu for six years, yet, thanks to a new NCAA rule that provides financial assistance for families of players to attend the Final Four, Azubuike got that chance this week.

Tonight's Final Four showdown with Villanova — 7:49 p.m. on TBS — will mark the first time Azuonuwu has seen her son play basketball in person.

It sounds as if Azubuike, who has been swamped with media obligations, game prep and other Final Four activities since arriving in San Antonio, was able to greet his mother at the airport late Friday night.

Her arrival marked the end of a wild journey that turned around quickly and included her getting a last-minute travel visa in their home country of Nigeria and catching a series of flights to make it to the Final Four. Azuonuwu received help from several members of KU's athletic department along with a few Kansas political officials and overcame a labor strike by Air France to make her way to San Antonio.

KU coach Bill Self confirmed the news during a brief interview on TBS around 3:30 p.m. central time on Saturday. Self has marveled all week about the very thought of Azubuike's mom taking in her first game on the biggest stage in the sport.

"Can you imagine, you've never seen your son play basketball and the first time you do it is in front of 70,000 people at this thing. I can't even imagine what's going to be going through her mind.”

Said Self of the specifics of Azubuike's mother's arrival: "We got her here. She missed flights, it took her forever, but she landed last night about 11:30 and Dok was at the airport to meet her. He didn't want anybody to go except him and our little party that picked her up. But I got a short video of it that probably nobody will ever see of the first embrace. It's so special."

"I hope he's not too emotional, but this trumps the game, him having the opportunity to see his mother."

In case you haven’t heard... Was just told Azubuike’s mom has made it to San Antonio. Got in around 12:30 am and it sounds like Udoka was there to greet her. Really cool. #KUbball

Wow this is brilliant, so happy for Doke. Now give her a show young man, RCJH

That should give Kansas the emotional advantage they need over Villanova. The Jayhawks have a habit of playing their best basketball in front of their loved ones, especially when their loved ones have come a long way. Bud Stallworth scored his 50-point game with his mother in the stands after she came up from Alabama to watch him play in Allen Fieldhouse for the very first time. Not saying Udoka will go off for 50 tonight, but I bet he has the game of his life. (And after all the trouble she went to, and all the strings people pulled, including Kansas political officials getting involved, he'd better!) ;)

Awesome!! How old was he when he outgrew Mom, If he has?