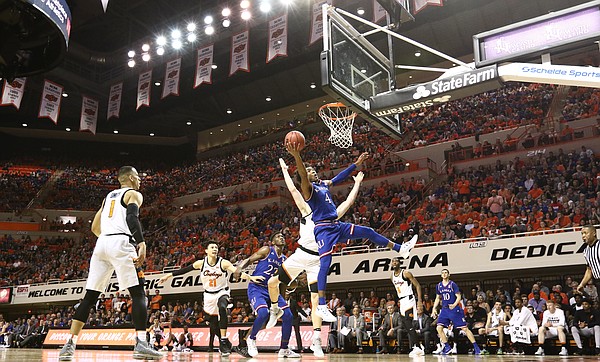 Kansas guard Devonte' Graham (4) is taken off balance by Oklahoma State forward Mitchell Solomon (41) on his way to the bucket during the first half, Saturday, March 3, 2018 at Gallagher-Iba Arena, in Stillwater, Okla. by Nick Krug

Quick grades for five aspects of KU’s 82-64 setback at Oklahoma State in the regular season finale at Gallagher-Iba Arena in Stillwater, Oklahoma.

KU's percentages aren't terrible — 42 percent overall, 35 percent from 3-point range — but their offense was. They looked out of sync for much of the game, could not run simple sets, at times running into each other, and never got the ball down to Udoka Azubuike with any kind of poise or consistency. Beyond that, the Jayhawks had just one player reach double figures (Devonte' Graham had 15) and scored just 64 points.

For the second time this season, Oklahoma State's offense lit up the Kansas defense, knocking in 50 percent of its shots and 42 percent of its 3-pointers while also getting to the free throw line 23 times. Kendall Smith scored 25 points and at times looked unstoppable and the OSU offense ran with good rhythm for much of the afternoon.

Give freshman forward Silvio De Sousa credit for pulling this grade into the C range because regulars Udoka Azubuike and Mitch Lightfoot played a sluggish game from start to finish and could neither help pull KU's guards out of the funk they were in offensively nor stop the Cowboys at the rim defensively. De Sousa, meanwhile, whom Self said was KU's best big man on Saturday — before admitting that that wasn't saying much — finished with seven points and three rebounds in 13 minutes.

Devonte' Graham, with a small assist from Marcus Garrett, was almost all alone in this one, with Svi Mykhailiuk having a hard time getting going and Malik Newman and Lagerald Vick playing two of their worst games of the season in terms of energy, focus and effort. Graham did what he could, nearly reaching his season averages in both points (15) and assists (8) but shot just 4-of-14 overall and turned it over three times.

De Sousa was solid and Garrett, as per usual, was better than his numbers suggest. He finished with seven points and five rebounds in 28 minutes, but played tough defense and had good energy, which was what led him to the big minutes, spelling Newman and Vick, who were yo-yo'd in and out of the game throughout the afternoon because of Self's displeasure with their effort. Sam Cunliffe played three minutes, mostly in mop-up time and Lightfoot tallied five points and three rebounds in seven minutes.

Sounds like we will have to retake this course next semester. Or one of those days where you just didn't show up for class.

It is surprising to me that Sam didn't get more minutes in this game. I get the pregame comments about playing to win and seeding and all of that but when guys don't get the message and are playing like it is a meaningless game shouldn't others get a chance to play meaningful minutes?

It is right up there with Devonte playing 39 minutes. Down 20 with 5 to go sounds like the perfect time to play Sam Silvio Marcus Mitch and Clay.

I can not believe that Self is co-Big12 coach-of-the-year. I mean, this team has shown zero player development during the conference schedule. You have a soph big that is hopeless from the free throw line. And, after costing a game, the head coach says we need to work on his technique - no kidding! Why was this not fixed his freshman year? Sam is an excellent free throw shooter and drove the ball when he was at ASU. But, he has simply been left to rot on the bench. Same with Silvio, They need to get game experience in the last four minutes of the first half. And, Vick has seriously regressed from his freshman year. He does not drive the ball; he does not rebound anymore; and his current slump shooting 3 point shots shows a lack of confidence or rushing the shot. I get that this is a terrible defensive team that only has two players willing to drive the ball and get to the free throw line. So, they only win when they shoot better than 40% from the 3 point circle and the opponent shoots less than 30%. In other words, they will not win another game this year.