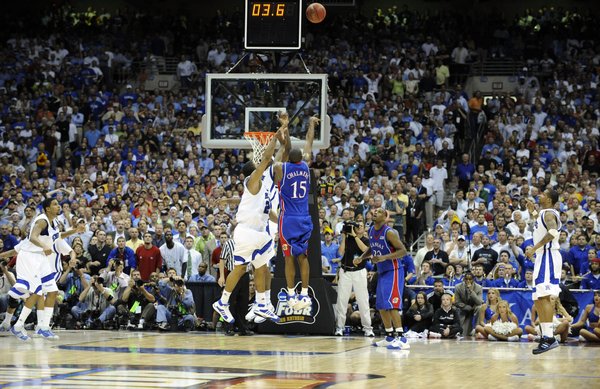 Kansas guard Mario Chalmers elevates for a three-pointer in the remaining seconds of regulation Monday, April 7, 2008 at the Alamodome in San Antonio. Chalmers swished the three to send the game into overtime. by Nick Krug

San Antonio — Given that this was, after all, the very venue that it all went down, it seemed only fitting for Kansas coach Bill Self to talk a little — or, perhaps more appropriately, to be asked a little — about the now famous “Chop” play that helped win Kansas the 2008 national title.

The play, you surely know by now, was the one that led to Sherron Collins' diving pass to Mario Chalmers for a 3-point shot that is among the biggest in Final Four history.

Collins, at our KUsports.com season tip-off party last October, talked in detail about the play and how it was designed for him to sprint the ball up the sideline — keeping the KU alignment wide and the defense spread out, as Self is accustomed to doing — but that he crossed Memphis guard Derrick Rose over in the back court to get a better, faster angle up the floor, therein giving the now-legendary play life.

“I hear (Memphis coach John) Calipari tell Derrick Rose to foul me,” Collins recalled. “Normally, this play I’m supposed to stay on the outside and keep it as close to the sideline as I can, but him hollering foul me, I heard it, and, if he would’ve fouled me we would’ve shot two free throws and would’ve never been able to tie the game so I didn’t want to get fouled so that’s why I crossed over and made the play a little bit more difficult than what it was.”

Collins made the pass. Chalmers hit the shot. The Jayhawks dominated the overtime. And life has not been the same for anyone associated with that team since.

It remains to be seen if a Chop-like play will be necessary this weekend to get the Jayhawks where they want to go — Self said the 2017-18 team, to this point in the season, has not run the play nearly as much as teams of the past — but Self on Thursday revisited the origins of the idea for “Chop,” which has been copied and tweaked by coaches at all levels of college basketball since the Jayhawks made it famous a decade ago.

There was a time during that 2007-08 season, however, when Self and his coaching staff wondered if the Jayhawks ever would score off of that set again.

The came during the Jayhawks' 72-69 loss at Texas in mid-February and Self said that initial Chop disaster actually wound up leading to Chalmers' big shot.

“That year, in '08, we totally screwed it up at Texas,” Self recalled Thursday. “And so, when we screwed it up, we probably practiced it ample times, to the point where, even though we eliminated the ball screen in that play with Mario (against Memphis), it certainly got our guys to believe that if we needed a basket we were going to get a great look running that one way or the other.”

This year's team certainly has had its share of heroic moments late in games. Svi Mykhailiuk's shot to tie the Elite Eight game vs. Duke last weekend is the first that comes to mind. Svi also hit a game-winner against Nebraska back in December to help Kansas avoid a three-game losing streak. Malik Newman's big time shot vs. Kentucky helped seal KU's Champions Classic win in Chicago. And Devonte' Graham's wild prayer of a layup in KU's victory at Texas Tech that clinched Big 12 title No. 14 in a row also fits the bill.

None of them came off of “Chop,” but the now-famous late-game strategy remains one of the best-known KU plays and will always be remembered as the biggest moment in the Jayhawks' last trip to San Antonio for a Final Four.

“Certainly it was good for us,” Self said.

Part of the legend has to be related to the photo. I don't think you can get a more perfectly framed image. There are lots of great images over the years and oftentimes related to a great play or game but I dare say that none is as complete. Shooter. Defender. Ball. Basket. Clock.

Maybe the scoreboard is missing though that ironically is one of those dichotomies (?). The shot was just to tie the game.

Over the years, there have been several games tied, but ever since '08 and 'The Shot' whenever KU has found itself in a tie game, I have always yelled, "Tied it! Overtime! We've got this game won!" Because it seems, in overtime, generally, KU digs deep and wins.

Svi's three at the end of the first half of the KSU game should be considered a heroic play. Five seconds to go, Svi inbounds to Devonte, who quickly dribbles up court to the three point line, turns, and flips the ball to a trailing Svi, who drains an NBA three as the buzzer sounds! A perfect setup since everyone expected Devonte would take the shot, along with the fact that he became a perfect screen for Svi.

Similar to that season... Who would take the shot in a similar situation this year?

All three: Devonte, Svi and Newman have made clutch plays late this season. I'd probably defer to Graham, but would feel good with any of those three getting an open look in the closing seconds.

KU's formula this year has been: Play it close throughout the game, get behind late, then win the game. Exciting and hard on the nerves of KU fans, but it has been working for the Jayhawks.