Thanks to senior guard Desi Rodriguez, Seton Hall has a head start on scouting Kansas 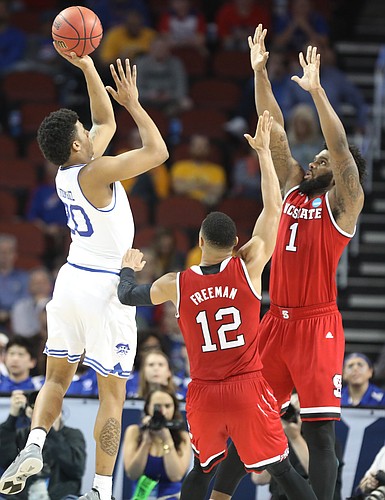 Wichita — He may have stopped short of saying he was excited to play the Jayhawks, but Seton Hall senior Desi Rodriguez sure sounds ready.

Speaking after eighth-seeded Seton Hall's 94-83 victory over No. 9 seed NC State at Intrust Bank Arena, Rodriguez explained that he already has a little familiarity with Kansas.

And it has nothing to do with knowing any of their players or coaches leading up to Saturday's showdown.

“It's funny because I watch them,” Rodriguez said. “I'm a fan of Kansas. But now I'm not no more, just for this game. But I watch their games a lot. Their games come on TV a lot. Just going through a variety of games, that's the best game on TV. They always give you a good game.”

Rodriguez expects to learn much more about the Jayhawks in the next 24 hours, but said he was pretty content with his head-start.

“Yeah. I've been doing scouting on Kansas. I can tell you a little bit about it. But I've been watching their game. Great team, great coach. We're just going with a focused mindset to try to get a win.”

Added Seton Hall's Khadeen Carrington, who led the Pirates with 26 points against NC State: “Yeah. I watch Kansas a lot, too. I watched them a few times this year. They got great guards. They got great bigs. So I'm sure coach is going to have a great game plan. I'm not bringing up a scouting quote like Des. I'm just listening to the coaches.”

Said Rodriguez, defending himself and paying KU a compliment in the process: “It's always good to watch good teams. Good teams play, you can learn. And I've been watching them and hopefully we can get a win.”

As for Willard's understanding of the Jayhawks, he appears to have some catching up to do.

“I have not watched Kansas one bit,” the Seton Hall coach said. “It's just not what I do. I just don't think I'm smart enough to watch more than one team at a time, to be perfectly honest with you.

“I know Bill (Self). And I have unbelievable respect for his program and have watched them play. So I know how they play. Bt this time of year, you kind of get in a bunker and you hold down. We'll watch a lot of film with the team tonight and put our game plan together. But you know you're going to play the 1 seed and you know it's going to be a challenge because the 1 seed is the 1 seed for a reason. And Kansas is Kansas because they're a phenomenal program with great players.”

Gonna need more Dok for this one I'm afraid.

KU can win without Dok..SH has lost 11 games, and they've had a fully healthy team..I think they played their best game all year against NC state..if Dok cant play a lot of minutes, then KU will need their 3's to fall and Lightfoot and DeSousa will probably need to score about 20 points and 10-15 rebounds combined..as well as stay out of foul trouble

Good luck with that.. Dez. You hopefully still be watching Kansas after the game!

amen to that..let him admire KU from the Seton Hall campus next weekend LOL

Athletes and politicians, man. So many words. Zero information.