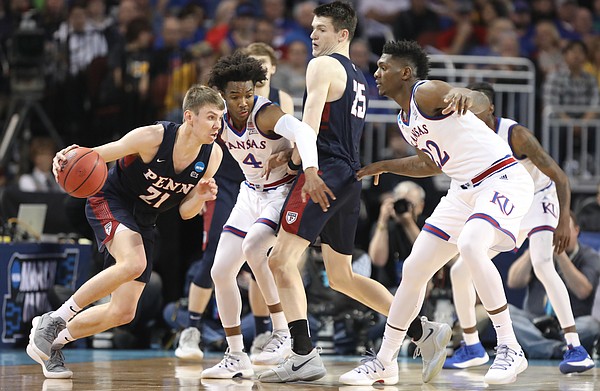 If Devonte' Graham had not been outstanding, the Jayhawks could have been in real trouble. And even Graham needed 24 shots to get to 29 points, with eight coming at the free throw line. The turnovers were down (8) and the free throw shooting (88.2 percent) and 3-point shooting (41.2 percent) was up. What's most impressive was that Kansas won this game by shooting just 17 3-pointers, including a 3-of-6 mark in the second half.

The Jayhawks got the stops they needed, but a big chunk of the reason for that was the fact that Penn simply missed a bunch of shots. The Quakers shot 39.3 percent for the game and missed 34 of the 56 shots they took. But give Kansas some of the credit for those misses, because KU's style and defensive effort really wore Penn down in the final 25-30 minutes of the game.

After a pair of rough games against K-State and West Virginia, Mitch Lightfoot returned to form in this one, finishing one point shy of a double-double and playing solid defense on a tough player in Penn's AJ Brodeur. “Their big guy's a little bit different style of big guy than we see in the Big 12,” Lightfoot said of Brodeur. “He did a great job. He was throwing some fakes in there that I haven't seen. It was a great team to play against. Take a page out of his book and put it in my game.” Outside of Lightfoot's nine-point, 11-rebound game, the Jayhawks got very little from Silvio De Sousa in his 10-minute return to Earth, and next to nothing (other than an emotional lift) from the 3 minutes played by injured starter Udoka Azubuike. KU will need both Lightfoot sidekicks to play much better on Saturday against Seton Hall.

Graham and Lagerald Vick were great and Malik Newman and Svi Mykhailiuk hit some timely shots and were as good as they needed to be. Newman had a rough defensive day and should be motivated to bounce back from that in Round 2. And Vick, who Self has said is on an uptick in the past week, delivered the kind of performance he can really build on heading into the rest of the tournament.

Marcus Garrett grabbed five rebounds — the same number as Azubuike and De Sousa combined — and, once again, played his role well in 22 important minutes. Azubuike's bench minutes were as important as anything, though, given the fact that his knee was uncertain and he now knows a little better what to expect from it on Saturday after two more days of rest.