Bill Self to coach U18 team with USA Basketball this summer 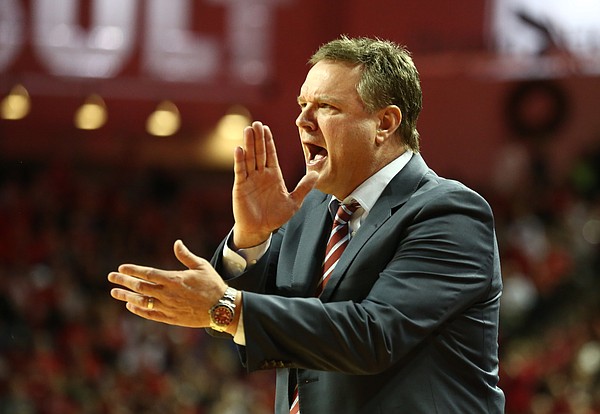 Kansas head coach Bill Self lays into an official during the first half, Saturday, Dec. 16, 2017 at Pinnacle Bank Arena in Lincoln, Nebraska. by Nick Krug

Regardless of how the Jayhawks do in this year's NCAA Tournament, Kansas coach Bill Self will not have to wait an entire year to guide a team through another tournament.

On Tuesday, Kansas and USA Basketball announced that Self will be the head coach of the U18 USA Men's National Team when it travels to Canada this summer to compete in the FIBA Americas basketball tournament.

Self, who served as a member of the USA Basketball Men's Collegiate committee from 2005-08, will be coaching international ball for the first time when he takes a group of Under-18 players to St. Catherines, Canada, June 11-17 for the event.

Self will be joined by former KU legend and Self assistant Danny Manning, now the head coach at Wake Forest, and Dayton coach Anthony Grant.

"It's an honor to be selected to coach, and I look forward to working with Danny and Anthony and the young men that will represent the USA in the U18 competition," Self said in a press release. "It's something I've wanted to do for a while, and I'm really looking forward to it.

“I've worked with Danny quite a bit, but I haven't had a chance to spend a much time with him as of late, and I look forward to reconnecting. I've always thought he has a great basketball mind. I'm very excited about working with Anthony. He has spent a lot of time running his own programs but also has spent a lot of time with coach (Billy) Donovan at Florida and with the (Oklahoma City) Thunder. I think he will add some things to the staff that we can utilize and make us better.”

Self is far from the only one looking forward to the summer challenge.

"I feel very fortunate and blessed to be a part of USA Basketball and have this opportunity to be a part of this staff," Manning said in the release. "To have a chance to be an assistant on Bill's staff again is something I am really excited about. There will be a lot of familiarity with coach Self after working with him for so many years, and he is a very good friend of mine. I have gotten the chance to get to know Anthony over the years, and I am sure he will do a great job at Dayton. I am excited to spend time with Bill and learn from him again and also learn from Anthony and all his experiences."

Added Grant: "It is truly an honor to represent our country as a member of the USA Basketball U18 coaching staff. I look forward to working with coach Self and coach Manning and preparing our young men to qualify for next year's U19 World Cup. I have tremendous respect for Bill Self and the success he has had at every stop in his career," Grant said of the USA coaching staff. "I am excited about this opportunity to work with him and help us win the FIBA Americas Championship. I have known Danny for several years and what he has been able to achieve as a player and now a coach is admirable. I respect him as a man and a coach, and look forward to being on this staff with him."

Bringing Self into the fold of USA Basketball was a long overdue move according to Purdue coach Matt Painter, who also serves as the chair of the USA Basketball Men's Junior National Team Committee, which is responsible for selecting the USA U18 staff and athletes.

“The leadership of Bill, Anthony and Danny will be instrumental in the development of the U18 national team,” Painter said in the release. “They are outstanding leaders that get the most from the players they coach and will be able to continue the success that the U18 team has experienced on the global level.”

While the opportunity to coach a national team and represent one's country, the way KU did at the World University Games in South Korea a couple of years ago, certainly qualifies as an exciting adventure, the opportunity to spend some more quality time around a handful of players who could one day play for him at KU is an added bonus for Self and has been beneficial to other college coaches who held this position in the past.

In 2016, current Texas coach Shaka Smart, along with Maryland's Mark Turgeon and UConn's Kevin Ollie, led Team USA to the gold. And two years before that, then-Florida coach Billy Donovan teamed with Sean Miller and Ed Cooley to lead the U18 team to the top prize.

Training camp for the 2018 USA Basketball Men's U18 National Team will be conducted from May 31 through June 2 at the United States Olympic Training Center in Colorado Springs, Colorado, and finalists for the team are expected to be announced on June 2. Athletes eligible for this team must be U.S. citizens who are 18 years old or younger (born on or after Jan. 1, 2000).

The team will continue training June 3-8 in Colorado Springs until departing for the 2018 FIBA Americas U18 Championship.

Congrats to HCBS, what a great honor! Matt: "Self..will be coaching international ball for the first time" How on earth could that statement possibly be true when you mention also that he coached in the World U games as well as in Italy this summer. i dont believe they were playing with NCAA balls or rules at either of those places, no? "The International University Sports Federation (FISU) which governs the World University Games " - - http://www2.kusports.com/news/2015/ap... Otherwise, great article!

Will that help with big time recruits and their decisions. Sure won't hurt.

I think it great he'll get to coach with Manning again. I think they both kinda miss each other lol.