Report: 5 programs stand above the rest for 5-star Class of 2019 PF Jeremiah Robinson-Earl 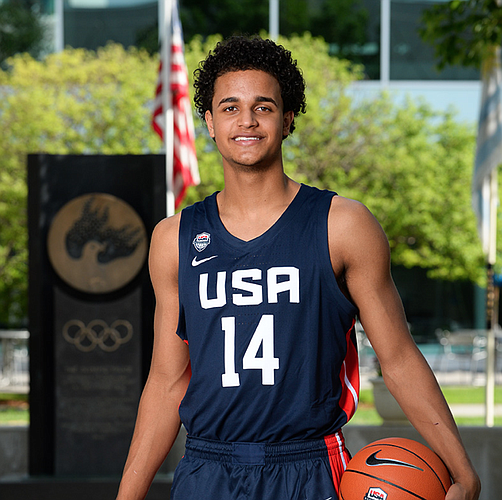 Busy working toward winning a gold medal with the U18 Men’s National Team at the FIBA Americas in Canada, which gets under way on Sunday, Bishop Miege standout forward Jeremiah Robinson-Earl has continued to keep one eye on his recruitment.

The No. 16-ranked player in the Class of 2019, according to Rivals.com, Robinson-Earl recently told Rivals recruiting analyst Corey Evans that five programs had stood out to him the most throughout his recruitment thus far, adding that he was still open to adding any other programs who show serious interest into the mix.

Those programs, as things stand today, are: Kansas, to no one’s surprise, North Carolina, which seems to be KU’s biggest competitor here, Arizona, UCLA and Virginia.

Robinson-Earl recently talked about all five programs with Evans, breaking down what he liked about each. Here’s a quick look at what he had to say about KU.

“Obviously, it is one of the best schools in the country, right down the road,” he began. “This (USA Basketball) experience has been good, with just seeing what (KU) coach (Bill) Self has been like in action instead of just seeing him being nice just to be nice, but rather out here coaching us to get better.”

Despite his father’s ties to KU — former McDonald’s All-American Lester Earl played at Kansas from 1997-2000 and went toe-to-toe with Kobe Bryant, among others, in the 1996 — and the school’s proximity to his high school and hometown, Robinson-Earl said he had been exploring all of his options throughout the past couple of years of his recruitment and continues to do so today.

“There is no pressure to go there,” he told Evans of KU. “When coaches ask about if KU is where I am going to go, I just tell them that I open to anybody and if you’re willing to recruit me, I am open to you.”

As for North Carolina, which many believe will be KU’s biggest threat to landing Robinson-Earl, the 6-foot-9, 235-pound power forward made it clear in his interview with Evans that receiving interest from a coach like Roy Williams was both flattering and intriguing.

As is fairly standard, Robinson-Earl told Evans that he likely would start taking official visits this Fall and could see himself making a decision in the winter or early in 2019.

As for Evans’ read on Robinson-Earl’s recruitment, his take goes down as good news for the Jayhawks.

“Kansas has been and will continue to be the program to beat,” Evans wrote on Friday, “though Virginia, North Carolina, UCLA and Arizona could have a puncher’s chance as well.”

Lester Earl's kid. Wow. The passage of time is officially on light speed.

Word around State Line is that Coach Zych of the Stags could be part of a packaged deal if JRE commits to KU.

Uhhhhh....we don't have a coaching opening, and we don't need a HS coach to make us better.