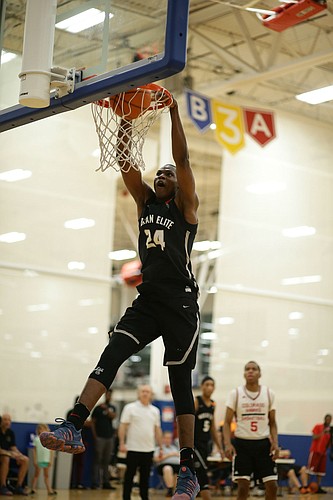 Kansas recruiting targets N’Faly Dante and Malik Hall are headed back to Lawrence. And this time, they’re bringing a few friends.

Starting today, and running through Sunday, the first session of the annual Hardwood Classic AAU tournament will tip off at Sports Pavilion Lawrence. Session 2 is set for July 26-29 in the same spot.

The weekend extravaganza, which will also feature 3-point and slam dunk contests on Friday night, will mark the encore performance for the Sunrise Christian Academy teammates, Dante and Hall, who played in the showcase game of the KC Classic at this very same venue earlier this spring.

Attracting more than 250 teams that will play in six different venues around the city, the event once again figures to be one of the hottest recruiting spots in the country during the next two weekends.

Those were just some of the bigger names of the more than 350 college coaches — from all levels — who made the trip to town to check in on some of the top talent in the next few classes.

This year’s event, which will feature players and teams from 15 states, including five teams from Nike’s EYBL circuit, will be headlined by some of the best players and biggest names in the 2019 and 2020 classes, led by Dante and Hall.

As for the marquee teams at the event, two of the Final Four from last week’s Peach Jam event down south will be in Lawrence, with City Rocks, out of New York, and Dante and Hall’s MoKan squad looking to take this weekend’s title.

Here’s a quick look at some of the top prospects who will be in Lawrence this weekend, hoping to help their teams bring home some hardware and impress some college recruiters in the process.

Hall plays at Sunrise Academy in Wichita, and currently is ranked No. 49 overall in the 2019 class by Rivals.com. Hall enjoyed a strong Peach Jam showing, and currently has 23 offers, including KU, Villanova, Missouri, Oklahoma, Oregon, Oklahoma State, Purdue and others.

The powerful Dante plays with Hall at Sunrise Academy and is known as a force defensively with his shot blocking and rebounding. Dante already has received offers from Kansas and Kentucky among others.

The five-star recruit at one time carried 41 scholarship offers from some of the best of the best, including Kansas, Duke, Villanova, Michigan State and Syracuse.

A highly recruited quarterback, as well, Girard garnered national headlines after averaging over 50 points per game this past high school season. He also already has broken Lance Stephenson’s New York state record for career scoring. The dangerous shooter and 3-star prospect won the Hardwood Classic 3-point contest last year, and holds offers from Duke, Syracuse, Michigan and many others.

The teammates at Sierra Canyon also team up for the Oakland Soldiers. Their former NBA dads draw plenty of attention and Pippen and Martin represented the names well as both hold multiple Division I offers.

Admission to the Hardwood Classic is $10 for a daily pass for adults and $5 for kids 7 and under. Kids 5 and under get in free.

Kansas is recruiting Isaiah Stewart? Somebody needs to tell that to Stewart. It will come as a surprise.

KU offered and was in on him for a while until Stewart recently removed KU from his list. All it says up top is that this is a list of the top prospects at the event. Some of them are KU targets but not a ton. Still an interesting tournament full of current and future talent.

Scotty Pippen Jr.? I hope he'll actually go in the game when his coach tells him to.

the state of Kansas doesnt produce too many ranked HS kids..seeing as how there will be 2 KS kids in this event, KU needs to make sure they commit to KU and join other Kansas greats to join KU..Perry Ellis, Wayne Simien being the 2 recent ones..have no idea how Self let Calley-Stein leave the state..especially for Kentucky of all people LOL