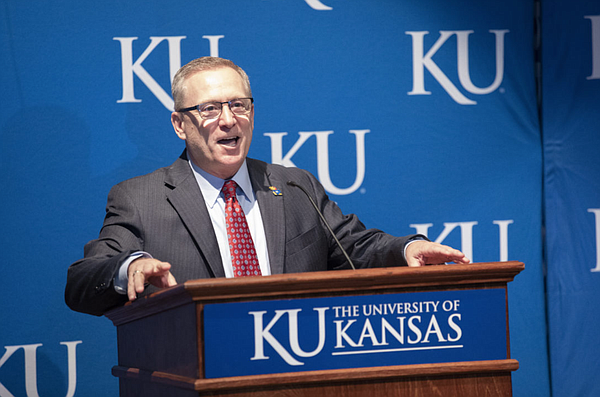 For the past seven years, after watching Missouri leave the Big 12 for the SEC, Kansas, as an unofficial athletic department policy, has been steadfastly against scheduling the rival Tigers for any regular season games in any sport.

Long was asked that very question during a 30-minute phone conversation with the Journal-World on Thursday and although he did not shut the door on anything, it was clear that Long had not spent much time thinking about rekindling the rivalry with the Tigers.

“I’ll be candid,” Long began. “That’s not high on our priority list. As I walk in the door, there’s so much more to do. And I have to learn, from the Kansas perspective, the view of that rivalry. I would never make a decision about something as important and critical, in my mind, before I got to know the University of Kansas Jayhawk athletics type of perspective.”

As expected, Long, who will officially start at KU on Aug. 1, said he had not heard from anyone from Missouri regarding the rivalry but added that he imagined that people on both sides of the state line were discussing it somewhere.

“I’m sure it’s on Twitter,” he said. “But I haven’t had a chance to look at a whole lot of Twitter.”

Thursday’s phone call was not the first time Long addressed the KU-MU topic in the eight days since being named KU’s new AD. But it was the first time he offered any kind of indication about where he stood on the status of the rivalry.

It took Long less than four minutes during his introductory news conference on Wednesday to bring up the hot-button topic.

After spending nine years as the AD at Arkansas from 2008-17 — six of them while competing against Mizzou in the SEC — Long knows a thing or two about the Tigers. And he arrived in Lawrence well aware of the history of the KU-MU rivalry, even having a little fun with it while introducing his family.

After first recognizing his oldest daughter, Stephanie, who is in grad school at Arkansas, Long moved on to his other daughter, saying simply, “I’m also joined by my youngest daughter, Christina, who is an undergraduate journalism student. Now she attends a university in a bordering state and that’s where I’ll leave it.”

The room erupted in laughter and Long later was asked a little more about the dynamic of having his daughter attend a rival school.

“It started when I was at Arkansas and she was at Missouri,” Long explained. “You’ll find my youngest child has quite a personality and we get after each other pretty good, so there will be competition right here in the Long family between KU and Missouri, I guarantee you that.”

Despite now being in its seventh year of a hiatus that carries an unknown and open-ended time frame, the Border War rivalry has remained wildly popular in Lawrence and throughout the state, with Jayhawks everywhere continuing to drudge up anti-Mizzou jokes and comments at opportune times, getting particularly rowdy when the KU and MU softball and volleyball teams met in postseason play on a couple of occasions during the past seven years.

Last fall, just before the start of the 2017-18 college basketball season, KU and MU played an exhibition basketball game at Sprint Center to benefit hurricane relief charities, but even then there was no serious talk of renewing the rivalry that has been defunct since MU left the Big 12 for the SEC in July 2012.

KU basketball coach Bill Self has been a strong supporter of keeping the Tigers off of KU’s schedule and only agreed to the exhibition game because he believed it was a key factor in raising as much money as possible for the hurricane victims.

And former KU athletic director Sheahon Zenger was equally committed to the stance that the Jayhawks should not schedule the Tigers any time soon, a feeling that was universally supported throughout the KU athletic department.

It’s hard to imagine Long making any drastic moves to change that, at least initially. And it seems like a safe bet that the new KU AD will honor whatever the coaches in his department feel is best, regardless of what it might mean for the Long family rivalry.

There is no rivalry and that’s what Mizzcrap wanted.

Now the Mizzcrap fans desperately want it back.

I say keep em off the schedule. That’s what happens when you make impulsive decisions out of anger.

i wouldnt mind playing MU but im not heart broken over not playing them...but I will GUARANTEE this, the NCAA tourney committee WILL eventually place MU in KU's bracket and set up the chance for them to play just like they did WSU...at some point in time, MU and KU will play in BBALL again..KU is gonna have to make vast improvements to its FB program if its ever gonna play MU in FB

AD's know that they don't keep and lose jobs because of coaching support or lack thereof, tho to their credit the coaches also know donors are the key to the program.

For the longest time I was against playing Missouri in anything. But after the success of the Border War exhibition basketball game for hurricane relief last season, I'm in favor of bringing it back as a regular season game in Sprint Center every year. It can be like the feud between Kentucky and Louisville, or Iowa and Iowa State.

I'd offer them a three year deal. One in our place, one in Sprint Center on our season ticket package, and one in their place. I wouldn't offer them anything "equal."

I don't mind playing them again, because it means my MU buddies and I will have basketball to talk about again. But as for the game itself.....I'm not ashamed to admit that I care less about winning that game than I care about losing it. Winning does little for me, but losing it is a year of grief from friends on the wrong side.

Exactly. Nothing to win, everything to lose.

They destroyed the rivalry and 100 years of history when they left the conference. They did it for money and to poke their finger in our eye. What does it say to put them back on the schedule? It affirms their decision and says, "go ahead and cash in on one of the longest rivalries in college sports - think only of your own short term interests and sure, we'll give you the rivalry proceeds too - just like it never happened."

Still premature. If we accept a basketball series, MU will advertise us as being unwilling to face them in football and cry foul. I could remind you of our record in Division I games in the last several years...

Football IS the rivalry so you are probably right. I think MU is using basketball as a stepping stone.

If this rivalry is ever renewed it needs to be on OUR terms which means Basketball only and football only if we ever get the program back on track. We are in the position to dictate the terms if and when it pleases us.

Mizzou skipped out on the conference. Buh-bye forever...

And yet, we have had no problem playing Nebraska, Colorado and A&M, all,of whom also left the conference. In addition, if KU was invited to move to another conference, most people here would have jusmped at the opportunity. Some KU fans are clearly jealous that MU was offered a spot at stable conference and KU wasn’t.

Fair point but those schools were not our rivals. If it was my decision I would not schedule any of the defectors.

Now that the MU leadership that took the to the SEC has either quit or been forced out, I don't mind playing them again. But only once a year per sport and at a neutral location. I wouldn't welcome them to Lawrence and would sure not go there.

But what I really want is for KU to play exhibition games against UCM. Phog Allen coached both schools so we could have the "Phog Allen Cup' or some other item (Doctor's bag) as a trophy. And Mules don't like Tigers anyway. There's also a small but nice memorial display at UCM's football for Dr Allen. It even has his old med bag.

I can see it now. Somehow, that bag disappears from CMU, winding up in Lawrence. CMU asks for it back, and KU says come and win it back, if you can. CMU then offers to play us in football, at which point KU hands back the bag.

With regard to money from a KU / MU series, my understanding from relatives in Arkansas who are Hog fans is one of the big things Long did to get crossways with donors is to cancel all Razorback games in Little Rock. ( Since reinstated by the new AD ) Fayetteville certainly makes more money on paper, but it apparently irritated a lot of big Little Rock donors so, in the long run, maybe it was short sighted.

Missouri made a self-serving choice. That choice had consequences, both for MU and KU. Now, they want the best of both worlds. I don't think we should ever play them again in anything, outside of an NCAA tournament where we have no choice. .I think there are a LOT of KU fans, like me, who would be angry at doing so. It's like sending an anniversary gift to the ex-wife. No. If he misjudges that anger, he'd damn sure better win big and win quick.

Never! The "rivalry" is not in hiatus. Those *#@!wads left, unilaterally ending the oldest football rivalry west of the Mississippi and I believe the 3rd oldest in the nation. They're gone forever. Screw 'em.

I think this game of all games will.not only fill the stands but we will be up for this game. Any time we can play spoiler against mizzu I'm for it. My opinion, we have nothing to lose.