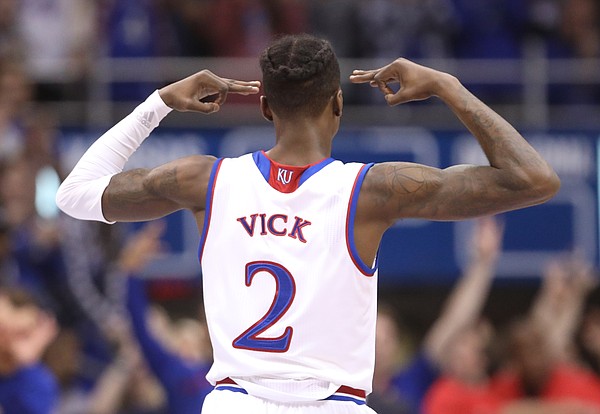 The experiment known as Lagerald Vick’s return to Kansas evidently is off to a good start.

Talking with reporters shortly after the official introduction of new athletic director Jeff Long, KU men’s basketball coach Bill Self on Wednesday classified Vick and him as being “definitely right now on the same page,” as summer practices and team workouts move into their second month.

Attitude and effort were two of the key sticking points for Self while deciding whether to take Vick back after the former KU starter pulled his name out of the NBA Draft and began examining a potential return for his senior season. So the importance of Vick getting off to a good start this summer cannot be overlooked.

Self’s willingness to say that he and Vick are on the same page is significant considering the KU coach and Memphis native were rarely in step during an up-and-down junior season for Vick, who started 35 of 39 games for KU during the 2017-18 season and finished as the team’s fifth leading scorer at 12.1 points per game.

And, at least to this point, it’s clear that Vick, who accepted a scholarship for his senior season after agreeing to an undisclosed set of rules he would have to follow in order to stay in good standing, has embraced the challenge of bringing a different mindset to the program.

In order for the experiment to work — it remains to be seen exactly what success with his return means or looks like for Vick or the Jayhawks — the 6-foot-5, 175-pound athletic guard is going to have to carry this strong start with him throughout the rest of the offseason and into the start of the 2018-19 campaign.

“Whatever the situations were with Lagerald on him exploring (his professional options), on why he would explore and why I would’ve felt, at that time, that that would probably be a wise decision, those are over,” Self explained. “The past is the past. He knows that, I know that and I’ve been real impressed with how hard he’s working.”

While no one expected Vick to return to the team and slide right into a strong leadership role, the fact that he has fit in well with a young and hungry bunch trying to prove themselves on a daily basis is a terrific sign for Vick and the team and an indication of how well the old and the new have meshed.

“Practice is actually going good,” Self said. “You know, we get four hours a week with the guys and we’ve been splitting that, two hours individual improvement and two hours team type things. And it’s actually been very good.”

“We’ve got a lot of big bodies,” he said. “And baskets aren’t easy to come by. I’m hoping it’s because we’re challenging shots better and we’re more physical. I hope it’s not just because we’re awful shooters. But it’s been very competitive, far more competitive than it’s been in years from a competition standpoint.”

I keep coming back to that post game handshake line where he says something to Huggins. I don't know what it was but definitely wasn't positive. Seniors and leaders can't do that garbage, nor can he be involved with any domestic violence accusations or any negative distractions from the program.

Look at Svi - he couldn't guard a garbage can his freshman year - he improved each yr and was a damn good defender as a senior. Vick has regressed as a defender - and a dribbler - how is that possible? Both of those need to improve along with his cocky attitude or he watches from the bench and is destined to play ball in Uzbekistan next yr.