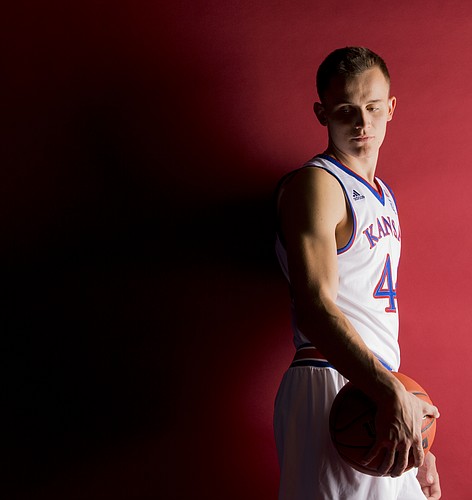 As he enters his third season with the Kansas basketball program, up a few pounds and dozens of memorable moments, KU forward Mitch Lightfoot heads out on an interesting adventure.

As arguably the most naturally gifted leader in the program — from the standpoint of energy, action and experience — Lightfoot will be leaned on a lot during the coming months to help KU’s young roster learn the way things are done at Kansas while also providing a voice of accountability and direction along the way.

Having an upperclassman in that role is key for the 2018-19 Jayhawks, who are tasked with having to replace one of the best leaders in program history in Devonte’ Graham, a fixture on the roster for the past four seasons who showed leadership tendencies even as a true freshman.

While others will be asked to carry some of the leadership load — point guards Charlie Moore and Devon Dotson come to mind because of the position they play, as does Quentin Grimes because of his status as arguably the most talented player in KU’s backcourt — few will have the advantage that Lightfoot has, carrying two full seasons and three offseasons of knowledge and wisdom from the leaders who came before him.

“I think those guys have done such a great job of showing me what it means to be a leader and what it means to care for your teammates and your coaches and organization so I'm just trying to be like them,” Lightfoot said of Graham, Frank Mason III and others like them. “I’m excited for it, just learning from the previous leaders here — Landen (Lucas), Frank, D-Tae, Svi. I just kind of feel like I’ve had some pretty cool role models to learn from and I’m excited to kind of show the younger guys what they’ve taught me.”

There are ways, of course, that, try as he might, Lightfoot simply cannot replicate what the Grahams and Masons of the world brought to the table.

For starters, they play completely different positions. Beyond that, those past leaders played huge roles and were vital to the every-night success of the team and Lightfoot figures to carry on as a key role player instead of lead dog.

That’s if he plays at all. Because KU’s roster, for the first time in a few years, is so loaded in the front court, fighting his way to playing time could be tough regardless of Lightfoot’s advantage in the experience department. And while programs of all kinds benefit from off-the-court, behind-the-scenes, in-the-weight-room types of leaders, there often is no substitute for a leader who plays a key role and is always in the thick of the action.

While he will compete for playing time and give everything he has to earn it, how many minutes Lightfoot plays is ultimately out of his control. Beyond that, if the rest of the KU big men elevate their games to a level that’s close to their ceilings, Lightfoot could face the possibility of red-shirting the 2018-19 season, which would make it even tougher for him to be the kind of leader this team needs while potentially being the best move for Lightfoot’s career longterm.

Regardless of how it all plays out over the next couple of months, Lightfoot will have a role on this team and, whether he red-shirts or not, his experience, confidence and commitment to the program will put him in a terrific position to set good examples for KU’s newcomers.

Asked recently what specifics he appreciated most about the leadership provided by guys like Graham, Mason and Mykhahiluk, Lightfoot pointed to mindset and attitude much more than anything specifically related to basketball.

“I think you have to take the role that they left for you to take,” Lightfoot said. “How they carried themselves, on and off the court, on campus, being grateful for the opportunity, being grateful to your fans, just honoring what it means to be at Kansas. It's just something special that they've done for this university and I'm going to try to replicate it. There's a lot of leadership to be had and hopefully I'll start helping these young guys out.”

Lightfoot figures to have leadership help up front in the from junior center Udoka Azubuike, who, after testing the NBA waters, is looking to expand his game in all areas, as well as from Memphis transfer Dedric Lawson, who hits the court with plenty of college experience but, to this point in his career, has been more of a lead-by-example type of player.

Last month, Lawson told the Journal-World that he liked the idea of being a veteran on a young team and thought he could step into a leadership role if needed.

“I’m a guy that might not say a lot of things to you,” Lawson said. “But I just think if I do the right things and be that good role model that guys need as an example others will follow. If coach wants me to talk more, I will, get on guys and things of that nature. I’m looking forward to it.”

Earlier this summer, after a team workout at Bill Self basketball camp, KU assistant coach Norm Roberts said the coaching staff was counting on Azubuike stepping up as a leader, as well.

“We want Udoka to be more vocal,” Roberts said. “He’s one of our veteran guys. He’s been out there in the wars and we’re going to need him to do that for us.”

To that end, Lightfoot, ever the team player, said he had been impressed by what he had seen from Azubuike so far this offseason.

“He’s been doing such a great job of being more vocal and talking throughout practice,” Lightfoot said. “I feel like Jayhawk Nation doesn’t get to see that side of him, but he helped Silvio (De Sousa) out so much last year. Same as me. He taught Silvio so much and that was great for Dok’s confidence.

“I know he loves it here. He loves the fans, he loves the community and I feel like each one of us on the team has a good connection to Dok because he’s a little bit farther away from home than most of us. We are his family out here and we’re just excited to have him back. Obviously, he’s a monster and he’s going to bring stuff to the table that most people can’t bring.”

If leadership is one of them, Azubuike could be one of the most dynamic and visible big men in a KU uniform since Thomas Robinson.

But even if it’s not, the Jayhawks know, whether he’s playing big minutes or not playing at all, they can count on Lightfoot to be their rock when it comes to leading the way.

If DeSousa plays, Lightfoot will see a hug reduction in minutes but if SD is held out (which he should be until he has been fully cleared again) he should see solid minutes as Lawsons backup

i don't know about that. mitch knows all the set plays for position. desousa is still pretty raw. self might not have to use him like he was forced to last year.

Forced or not, he was statistically our best big at the end of the year (pts/min and reb/min among other stats).

It is interesting that Mitch recognizes the leadership provided by Lucas but you seemed to ignore it in the discussion Matt.

It would seem to me that Mitch will be every the leader Landon was and more. The team apparently recognized and appreciated it more than those outside the circle.

the guy has played his role without complaining. a bonafide leader when it comes to knowing a couple systems self has run now. if his knowledge improved like he says his body did then he should step up and take a starting spot by force. not at center, let him play his natural position.

Unfortunately, that starting 4 spot next year has been locked up since the Lawson brothers decided to come here last summer. I got to watch Dedric Lawson play at Memphis and he was the real deal. That was before he developed the outside game he has reportedly added to his arsenal. He has conference POY potential and I don't think Mitch would be able to take his spot by force. I like Mitch too, so I think a redshirt season would be smart to let some of this depth move on and he can slide in to a Landen Lucas role for a couple years with Dotson and Garrett as his Mason and Graham.