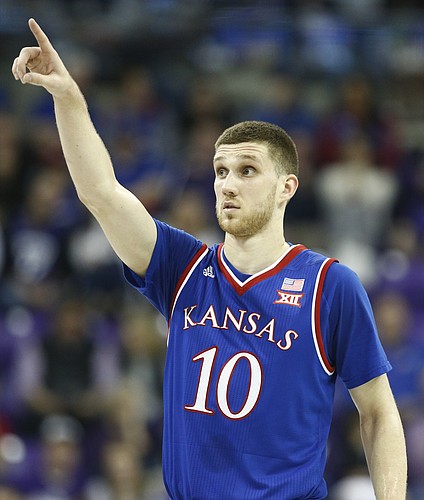 Kansas guard Sviatoslav Mykhailiuk (10) directs his teammates during the first half, Saturday, Jan. 6, 2018 at Schollmaier Arena. by Nick Krug

Quick grades for five aspects of KU’s 88-84 victory over No. 16 TCU on Saturday night in Fort Worth, Texas.

Red hot early and clutch from 3-point range all night, the Jayhawks shot 50.9 percent from the floor for the game, 55 percent from 3-point range (11-of-20) and put up 88 points on a team that was giving up just 74 per game, at their place. The offense had purpose and poise and also included a season-high 33 trips to the free throw line.

KU was killed on the boards (42-28) and gave up another eye-popping number (19) on the offensive glass. So right there, the best you’re going to do is the B range. But the fact that the Jayhawks got crucial stops late and recorded seven blocked shots — six from sophomore Mitch Lightfoot — pulled this grade to the brink of a B. Fifty points by TCU in the second half and still too many layups at the rim kept it from getting there.

Udoka Azubuike was effective early but troubled by foul trouble for most of the night. What looked like might be a monster game turned into a rather average 14 points and very disappointing one-rebound night. Luckily for the Jayhawks, Mitch Lightfoot was ready to step up and did so in a big way, delivering by far his best game as a Jayhawk at a crucial time. While Lightfoot's numbers were sensational, individually, they still didn't bring enough to the table to offset Azubuike's up-and-down night in the grading system. When your two big men combine for eight rebounds in 39 minutes, that's not quite good enough, even if it didn't cost Kansas in this one.

Graham and Svi Mykhailiuk were terrific, Malik Newman and Lagerald Vick weren’t. It was as simple as that in this one, with Marcus Garrett leaning closer to the Team Graham/Mykhailiuk than the other way. Fortunately for the Jayhawks, though, Graham and Mykhailiuk both played 38 minutes, which not only kept them on the floor but also kept the others on the bench, allowing KU to grind out the victory.

Lightfoot was spectacular and basically was the Kansas bench. Sam Cunliffe had a couple of decent moments, as well, and continues to look more and more playable — at least in spurts — with each passing game. It’s tough to know exactly what it will take to get Newman out of the funk he’s in but it definitely appears to be getting worse each game instead of better.

Great win, but this team still had alot of glaring weaknesses, Newman isn't producing anything and gets beat off the dribble frequently, Vick is in a funk, Udoka has to be a better rebounder, Garrett can't shoot a lick, I think Sam should play a little more, coach doesn't seem to give him any freedom to make mistakes, as soon as he makes one he is out, and the NCAA needs to get off their ass and do their damnjob, they cleared Ahmad for West Virginia so why can't we get a decision on our guys?

While saying there were 8 boards by the 2 bigs doesn't sound good there probably aren't many teams getting more than 8 boards from the 5 spot. Seems decent and far from the problem.

Huge hat tip to Mitch. So many people were scoffing at the unimpossing white guy that surprisingly can jump quite well.

What ever has been affecting Malik seems to have spread to Vick. It practically seemed like he wasn't on the floor. Was he on the TCU? At least he was a nonfactor for the first half.