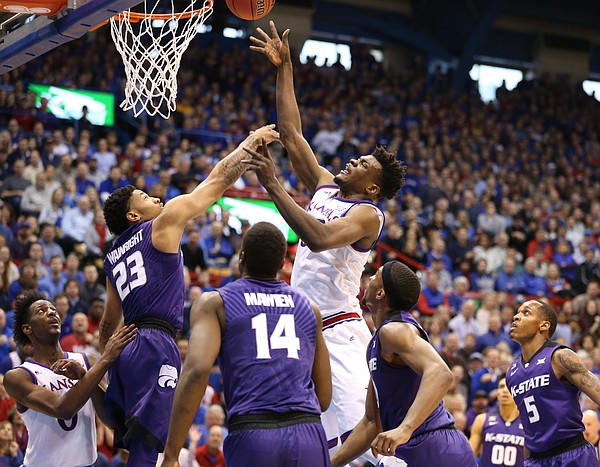 Kansas center Udoka Azubuike (35) puts up a shot against Kansas State guard Amaad Wainright (23) during the first half, Saturday, Jan. 13, 2018 at Allen Fieldhouse. by Nick Krug

The Jayhawks shot 49 percent from the floor, 43.5 percent from 3-point range and made 15 of 17 trips to the free throw line, a fact that brought to mind a strong percentage (88.5) and a solid number of trips. That includes 9-of-10 in the second half and 54.2 percent field goal shooting in the final 20 minutes. There were a few too many bad possessions and, outside of Azubuike's 8-of-9 shooting, no one really shot it that well. But it is a team game and, as a team, the Jayhawks' offense was good enough to get it done on Saturday.

Extra points for getting a stop at game point, which made up for an at-times tough day on the defensive end. It wasn’t all bad, though. Far from it. KU was better on the boards, forced turnovers early to fuel transition and got six blocks, five of them coming from Udoka Azubuike.

Azubuike had one of his best games in a while, finishing with 18 points, 8 rebounds and 5 blocks. Beyond that, he routinely did work early in the shot clock to get deep position and that made him much tougher to stop and led to a bunch of easy buckets for the big fella. It wasn’t a great day for his running mates, but the mere fact that Silvio De Sousa actually suited up and checked in is worth a small bump in the frontcourt grade.

There were points in this one when both Devonte’ Graham and Svi Mykhailiuk were the best players on the floor. There also were times when the K-State guards out-toughed and out-played all of KU’s guards. Guess that’s what happens in a one-point game. Svi and Graham were good enough to earn an A and Lagerald Vick delivered two HUGE 3-pointers late. But Vick again struggled to get going and Marcus Garrett and Malik Newman did not have their best days.

With Newman back in the starting lineup and Garrett back on the bench, the scoring punch potential from the KU bench went down. And that showed, with the Jayhawks getting four points all day from its non-starters. Both buckets were big, though, and the bench players, when they were out there, did their part to try to keep Kansas in control. Overall, the bench played a small role and did not do much on the stat sheet.

I'm not sure if you have more TOs than ASSTs is worth an A-. Just sayin'.

I wonder if they destroyed us on the Bruce Weber Play Hard Chart? Seems like they always do, according to the Weber the Whiner. Somehow, though, we've gone 12-2 against them since Weber's arrival.

And, while winning at KSU won't be easy, this is a KU team that should improve steadily as the season progresses due to the inexperience Dok, Silvio, Marcus and even Cunliffe. These guys should be getting just a little bit better each week. It adds up over time, and might help us to get a regular-season sweep.

FREECUNLIFFE Thought this might have been Dok's best game as a Jayhawk.

You were generous in scoring the bench. De Sousa, Cunliffe, Garrett, and Lightfoot made little to none contributions. I think Newman plays better coming off the bench. Self seems to have little to no confidence with Cunliffe but we now have a legitimate 9 man rotation. Bench production needs to improve rapidly.