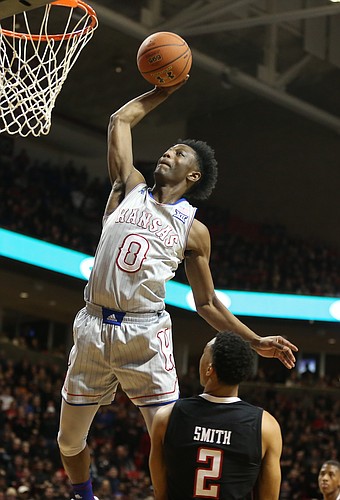 Kansas guard Marcus Garrett (0) soars in for a dunk over Texas Tech guard Zhaire Smith (2) during the first half on Saturday, Feb. 24, 2018 at United Supermarkets Arena. by Nick Krug

There were a couple of no-shows. And, as KU coach Bill Self mentioned after the game, Kansas was largely unable to play through big man Udoka Azubuike in the post. But they didn't need to on Saturday, as seniors Devonte' Graham and Svi Mykhailiuk made darn sure the Jayhawks did not let the opportunity to clinch a share of Big 12 title No. 14 get away from them. Kansas shot 50 percent from the floor and avenged a 6-of-26 showing from downtown in a home loss to the Red Raiders by knocking in 44 percent of their 3-pointers on Saturday.

This would have been higher if the Jayhawks had limited Texas Tech's offensive rebounds. Instead, after giving up 18 offensive boards to the Red Raiders in Lawrence, KU gave up 15 more on Saturday. That led to 16 second-chance points and directly kept Texas Tech in the game. When it mattered most, Kansas got big time stops down the stretch, but swiped just four steals all afternoon and only harassed Tech into eight turnovers.

Udoka Azubuike finished with just six points (on 3-of-4 shooting) but added seven hard-earned boards and blocked three shots. The points left more than a little to be desired, but also were not needed on Saturday. Mitch Lightfoot played limited minutes behind him but grabbed three rebounds and had a key block late. Overall, a slightly above average game for KU's two big men — Silvio De Sousa did not play — but not one to write home about.

We've already talked about Graham and Svi and they were terrific. Malik Newman had his moments and hit a couple of big 3-pointers, but also picked up a couple of dumb fouls. And Lagerald Vick had his second rough game of the season against Texas Tech, no-showing in almost every statistical category. Marcus Garrett wasn't great by any means, but he had a couple of big moments, both as a scorer and the kind of player who does all of those little things that don't always get recorded in the stat book.

Garrett and Lightfoot. That was it off the bench for the Jayhawks on Saturday. And while they weren't great by any means, they were solid in spots and contributed positively to KU's victory.

This game was won really because Vonte and Svi did not let us loose it. I seriously think if Evans had been healthy it could have been a loss. But we won, because we did it ugly, doesn't diminish it. Devonte's prayer was still a great shot, just getting it up on the board, to bounce around. And how many have we had bounce it and fall in against us this year. Remember the 6 or 7 when we lost to Ok St in Lawrence.

The other thing and this was coaching, was playing to trap on the sideline at the end of the game. Last 2 possessions Texas Tech did not even get a shot.

Posted this elsewhere, but I think that a journalist would want to present questions to Coach during media sessions to get at the bottom of the following:

Now that the Conference Championship is in the bag, Kansas is playing with house money, in a sense. They've met the minimum expectation for a team that is shallow on depth in the post and has wrestled at times with guard play that has been under par (Vick, Newman). They've risen above their challenges and coalesced into a team that remarkably has not only extended the school's string of conference wins, but broken the NCAA record in the process. With the pressure off now (because even playing well, most pundits won't have Kansas winning a title). They can get out of their heads and just focus on playing.

With that in mind, the question of how to utilize Silvio DeSousa is a pressing one. Again, since the title is sewn up, I would think Bill Self is now free to play DeSousa in games, earning him valuable playing time in the remaining two games and in the conference tournament to bring him into better standing to be reliable in March Madness. If we lose due to our post play and if Silvio is the culprit, then the team mentality should not suffer owing to an understanding about why he must be played. Win or lose with DeSousa in an expanded role, improvement and comfort level will follow him, with the hope being that he becomes reliable enough to play in March.

I would not expect Coach to experiment much if at all on SR night and with a shared title still a possibility. Win tonight and Saturday is another thing.

I guess one would have to balance the question of whether or not to win the CONFERENCE title outright (which even if you don't you've extended the streak and broken the NCAA record) vs. preparing for March.

I say prepare for March.

They still can't take your conference title away.