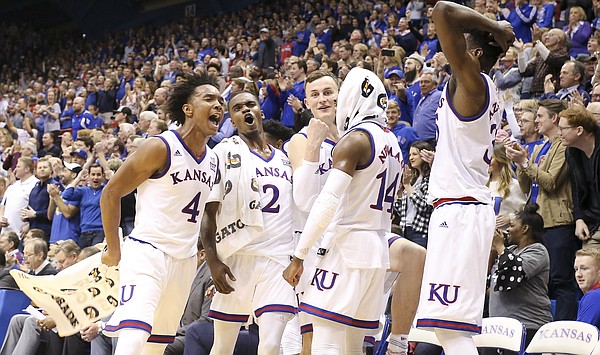 The Kansas bench celebrates a dunk in the final minutes by Kansas guard Sam Cunliffe (3) during the second half of their 104-74 win against Oklahoma on Monday, Feb. 19, 2018 at Allen Fieldhouse. by Nick Krug

Quick grades for five aspects of KU’s 104-74 rout of Oklahoma on Monday night at Allen Fieldhouse.

61 percent from the floor. 55 percent from 3-point range. Five players in double figures. Nine in the score column. I don't care who you are, or how you grade it, this was about as close to a perfect night as you can get in college basketball. For perspective, the template for this Report Card always says at the top, “Quick grades for five aspects of KU’s 114-71 rout of Texas Southern on Tuesday night at Allen Fieldhouse.” That was darn near the score on Monday night, against a team that features the potential national player of the year that some said could win the Big 12 at the season's midway point. Hell of a night.

Bill Self said after the victory that he still thinks his team can defend better. And it probably can. But boy were the Jayhawks good in the early going of this one. Active hands, elite intensity and energy and all kinds of effort plays that steamrolled Oklahoma and took the Sooners out of the game almost immediately. Heck, the Jayhawks even crushed OU on the glass in this one, 38-25.

Outside of a bad foul 20 seconds into the second half and a couple of quick ones in the first half, Udoka Azubuike was solid in this one and went after the ball whenever it was near him, be it on rebounds or shot attempts by OU. He finished with 10 points, 8 rebounds, 3 blocks and 3 steals in 18 minutes. And he didn't need to play more because of the Jayhawks' big night from back-up Silvio De Sousa, who tallied 10 points and 6 boards in 13 minutes. Add to that Mitch Lightfoot's 4 points and 3 blocks in 7 minutes and you're looking at a pretty strong night from a pretty good trio.

Svi found his shot again — 5-of-10 overall, 4-of-7 from 3-point range. Graham was sensational in out-dueling OU freshman Trae Young. And Malik Newman's 20-point night was a little overshadowed by all of it but certainly did not deserve to be. He was terrific and carried the confidence of a trained assassin. Add to that another strong showing by Lagerald Vick and it's another easy A.

We're going to give the bench an A tonight simply because of the fact that they actually played. Not only were De Sousa and Lightfoot good in real minutes, but Clay Young, Chris Teahan, Sam Cunliffe and even James Sosinski actually got in at the end to close the game out. “It's always great when you can sub your starting five out the last two minutes of the game,” Newman said after the victory. “It just speaks to how good our team played tonight.”

Our team plays like in All Stars game. But, this team is an All-Star indeed, when they play their hearts out like that.

I'm praying we can make 1/2 that many 3's against Tech this weekend. Please let KU take last night's game with them on the road.

don't get cocky. this isn't the same ou team mentally from a few weeks ago.

It was great to see De Sousa get some confidence and Doke's reaction and the fan excitement for him was amazing.

I feel like Lightfoot get's no credit. He's a liability defending high ball screens and gets a bit manhandled by other bigs but he always hustles, is great cutting to the basket off pick and rolls and he can he defend the rim pretty well.

Newman is really starting to show why he was so hyped. He tended to get the ball stuck in his hands earlier this season but now that he's comfortable in the system he's really starting to play well. you can tell he can get a shot any time he wants also. I think i'd want the ball in his hands if needed at the end of a game. Graham is great but he tends to be predictable in that situation and never gets a good look.

Agree, I see a bit of Keith Langford in Newman here as of late.

An A on defense might be a little generous. Yeah, our defense was great as we bolted to a 20-4 lead, and it was great as we started upping the lead to 20 and then 30 in the second half. But in between it felt like a game of trading buckets where the defense wasn't so good. I think it should be a B on defense.

Fair enough. But I went with the A because of three things...

(1) The start. Best I've seen from this team in terms of effort and pride/intensity.

(2) The rebounding edge. No small feat for a team that rarely ends up on the right side of the battle on the boards.

(3) Holding Trae Young to a career-low 11 points. That all but ended OU's chances and the Jayhawks (especially Graham) deserved an A+ for their D on Young.

They looked more confident than I can recall all season. I think they may have turned a corner with that WVU victory. Dok said afterwards, "We can beat any team in the country." I hope they can ride this wave for a long time.

I'm only asking for 12 more games like that this season.

May be the first time I have seen this team have fun. Its amazing how fun it is when you shoot 60% from the three point line.

But what about De Sousa? Do you still think he should transfer to a DII school because he's a wasted scholarship with no skill or BBIQ?

De Sousa will back up Dedric Lawson at the 4 next season. The big question is...what about Mitch Lightfoot? At the 5-spot there is Azubuike and David McCormack. Will there be much PT for Lightfoot next season?

It's still funny to hear people talk about Dok being back next year.

Vick, Newman, and Dok are all playing themselves off the team. The last month will be a determining factor. Mario would have been a senior if not for April. Too much ball left in this season to make an intelligent comment about next season.