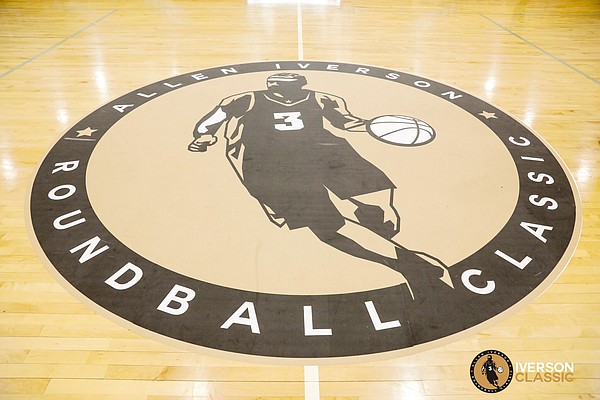 Maybe it's because he's a big man in a guard-dominated game.

Maybe it's because his name carries four stars next to it instead of five.

Maybe it's because he's entering a situation where he won't be counted on heavily right away because of the depth that's already in place at his position.

Regardless of the reasons for it, Class of 2018 Kansas signee David McCormack has flown under the radar a little bit while quietly having a monster Spring.

Playing in some of the same games as his future KU teammates Quentin Grimes and Devon Dotson, McCormack's numbers and time on the court have not been quite as noteworthy as his counterparts.

But the 6-foot-10, 260-pound center from Oak Hill Academy has been just as active on the All-Star circuit, playing in the McDonald's All-American Game and at the Nike Hoop Summit and also playing at the Iverson Classic, the second-year All Star event put on by former NBA legend and Hall of Famer Allen Iverson.

Dubbed on the game's official Twitter page as “the most competitive, exciting and disruptive game on earth, the Iverson Classic took place last weekend in Philadelphia and featured some of the top talent in the 2018 class.

In true All-Star game fashion, McCormack's Team Loyalty topped Team Honor, 148-134, and the future Jayhawk had the honor of hearing this postgame speech from The Answer himself.

That was not the only place McCormack distinguished himself from his future teammates this Spring. In addition to being the only future Jayhawk to play in Iverson's event, McCormack also was selected for membership into the Oak Hill chapter of the National Honor Society, which, according to NHS advisor Steve Hebold, is “one of the highest honors that can be awarded to a high school student.”

According to a news release, the National Honor Society “strives to recognize the total student, one who excels in several areas,” including academic performance, leadership, service to one's community and character.

None of this came as any kind of surprise to Paul Biancardi, the national director of recruiting for the ESPN 100, which ranked McCormack at No. 25 overall in its latest Class of 2018 rankings. That was the highest of all of the recruiting rankings for the player whom Biancardi said “embraces being a true center.”

McCormack committed to KU last September and made his pledge official in November, with KU coach Bill Self saying simply, "the more we watched, the more we liked."

“I love that kid. I truly love him,” Biancardi told the Journal-World on Monday.

Although Biancardi knew McCormack long before this Spring, he had the opportunity to fly home him with him following the Hoop Summit in Portland and the added quality time simply reminded him what a solid young man McCormack is.

“Anybody who loses 50-some-odd pounds and dedicates himself physically to his craft shows me that he's a willing worker, he's dedicated and he has no problem sacrificing because he did all three of those things,” Biancardi said.

As for what type of player the Jayhawks are getting in McCormack, Biancardi's description sounded like anything but a flashy All Star.

“He's going to defend the post, he's going rebound on both ends, — he's very active rebounder — he's a great screener and he's a guy who can develop a post-up game,” Biancardi said. “I love him, I love his work ethic and I love his humility.”

well, If Dok doesnt come back then a lot will be expected of him..the ideal situation would be for Dok to come back for his Junior season and DM to play without pressure then come back for his soph season when Dok does leave and become the man in the middle..it would be a bonus if Silvio was cleared to play again and he'd have even less pressure next season

I saw McCormack play a little during the McDonald's AA game. I was impressed with his athleticism for a big man and think he's going to be fantastic at KU. Hopefully he can shoot free throws well.

He sounds like a true student-athlete. He will be a huge asset for KU, and his future is solid. Am sure we will be proud to call him a Jayhawk.

I'm game for a 'Big Mac' should go down well next season. RCJH

He's going to defend the post, he's going rebound on both ends, — he's very active rebounder — he's a great screener and he's a guy who can develop a post-up game,” Biancardi said. “I love him, I love his work ethic and I love his humility.” It's been awhile since KU has had one of those.