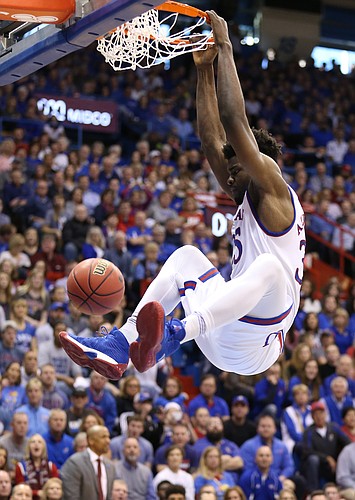 Kansas center Udoka Azubuike (35) delivers a dunk during the first half, Saturday, Jan. 27, 2018 at Allen Fieldhouse. by Nick Krug

So now that we know that Kansas center Udoka Azubuike is going to test the water and find out where he stands with NBA scouts and executives, it's time to examine Azubuike's chances of making the jump.

According to ESPN.com's Jonathan Givony, who runs ESPN's mock drafts and predraft coverage — and used to run DraftExpress.com — the competition to be one of the 60 players selected in the June draft is more intense than ever.

"There are 175 guys currently who are testing the waters according to my count, so the field is getting pretty crowded at this point," Givony told the Journal-World. "He had a good year for KU, outside of after he got injured, but the market for centers in his mold has almost completely evaporated at this stage."

Instead, the NBA has placed a premium on players like Joel Embiid, who, even at that enormous size, still can operate with guard-like skills. Embiid, obviously, is the class of that crop and on pace to become one of the young faces of the NBA's future. But even among the lesser-known big men on multiple teams, it's those skills that translate to roster spots and playing time.

"I think anyone watching the NBA playoffs can see that," Givony explained. "Guys who can't pass, shoot, block shots prolifically or reliably step outside of the paint defensively are essentially dinosaurs these days."

That, of course, does not mean that Azubuike does not have a shot at attracting attention from the powers that be in the NBA. Anyone who stands 7 feet tall and 280 pounds is immediately going to get noticed.

But the change in the game has created a different demand at the center position and the way Givony sees it, the modern game does not make a player Azubuike's size as automatic as it once was.

There was a time, not that long ago, when a man with Azubuike's measurements would have been an automatic lottery pick, with NBA teams valuing a big body to clog up the paint and create problems for opposing defenses on the other end.

But today, with the game moving faster than ever and becoming more of a shooter's game, those Greg Oden-, Spencer Hawes-, Hasheem Thabeet-type players who all were lottery picks within in the past 12 years, are no longer as attractive because they, in many ways, are viewed as one dimensional and a step slow to play today's game.

That's not to say Azubuike can't become the type of player the NBA wants. Even though it's unlikely that he ever will transform himself into an elite shooter, he moves his feet well for a man his size and certainly has the size and drive required to become a force in the paint. And there are plenty of people who believe that the easiest way to make it in the NBA is to find one thing you do well and become elite at it. For Azubuike, that could become shot blocking and/or rebounding.

But Givony, who has not had the KU center on any of his two-round, 60-pick mock drafts in the past two years, does not believe Azubuike has reached that level yet.

"He is a heck of a college player, and I do think he has a chance to develop into a NBA player eventually," Givony said. "But the appetite for taking on a project big man in his mold just isn't where it was 10-15 years ago."

That analysis is pretty obvious for anybody who has watched Kansas basketball extensively the past few years. And translation is even if he stays at Kansas the next two years for his NBA future if he does not develop a jump shot (which I've never seen him take one while he's been here) his NBA prospects are going to be slim

I read that KU football needs some help on the OLine.

If your and Givony's analysis is correct, Reggie, then Udoka might just as well leave now and go to Europe! Why risk another injury if his long term NBA potential is slim in your opinions?

Most of the European leagues have bought into the versatile center model even more than the NBA. Maybe he can play with Perry in Australia.

He will be 1st round pick in 2 years if he: keeps improving offensive moves around the basket; improves rebounding; improves conditioning; improves footwork on defensive end; and develops consistent 10-15 foot jump shot. These are attainable goals.

Not according to his detractors, James. I hope that you are right, and they are wrong.

I had previously commented that I thought he was definitely gone, and he had said when he arrived that he was here for 2 years because of the NBA rules. Villanova showed how the Drammond Green effect is changing the game. Is it NO that is exploiting it also?

More than anything, Dok needs to be able to show that he can defend the perimeter. He doesn't need an O game out there, though working on one handed FT's will go a long way toward improving his shot in general. He just needs to be able to limit the other 5's production out there.

It also seems to me that he should set aside the idea that he will be an Embiid-ish rim protector. Blocked shots are a bunch of instincts, which is why the much less imposing Lightfoot is a better/efficient shot blocker. Attempting blocks also has the negative effect of taking Dok out of position for rebounds. Yes, there is a need for help D in the paint, but mostly it seems to me he needs to stay put an get the rebound to limit 2nd chance points and also facilitate our breaks.

There was an article a while back - don't remember where, that talked about players becoming less attractive to the NBA after their senior year, than Jr year. I think that factors into players like Vick and Selden leaving. My guess is it will be the same for Dok. Unfortunately, Europe (game) is probably even less of an option for him. There bigs seem to be even more perimeter oriented.

It's hard to talk about "Euroleague" as one homogenized thing. The Euroleague bigs that make it to the NBA tend to be good shooters, but maybe they have traditional bigs we never see. Also, there are leagues all over -- for example, Israel, Australia, China and Russia. Sasha Kaun was pretty limited offensively, and he was very well paid in Russia.

Sasha also played 10 years ago. 8 years ago, Cole was also a 1st rounder. The game has changed.

Have you ever watched a Euroleague game start to finish? Except for highlight clips for the year's Doncic or Giannis, I haven't. Udoka seems like he could have played for that Italian group we played last summer. I'm sure that other leagues want nimble, long-range shooting big men like everyone else, but maybe there are traditional bigs at least getting contracts. "Ask Fran."

No doubt that he will be a Jayhawk next season. I totally agree with him to at least test the waters. Why not. Get some feedback on what strengths you have and weaknesses you need to work on. I look at this as a summer internship for his future.

I think he would make a great professional wrestler

Has he tried his hand at curling? He looks like a natural.