KU, K-State fans back together again for a common cause 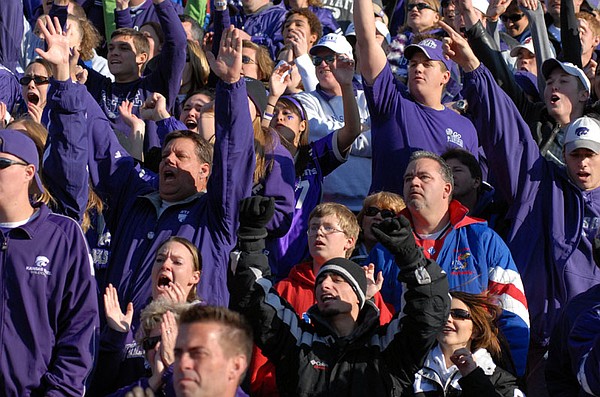 Back in 2011, a handful of Kansas State graduates who spent so many of their college days rooting hard against Kansas, came together to do something good for the city of Lawrence.

In honor of their friend, who had passed away after a battle with breast cancer, these K-State grads joined forces with former KU football player Harrison Hill, Lawrence business man Miles Schnaer and others in the weeks leading up to the KU-K-State football showdown to raise money to remodel Lawrence Memorial Hospital’s oncology wing, where their dear friend spent so many days during her treatment.

In just a short time, these women raised well over their goal of $100,000 and sent the money to LMH to honor their friend Jamie Pursley’s wish to make the environment and atmosphere inside the treatment rooms fresh and upbeat.

Today, this same group, now operating behind The Jamie’s Wish Foundation name, is at it again, this time for the benefit of the University of Kansas Cancer Center North, located in Kansa City, Mo.

“JWF has one goal,” the group wrote in a press release. “To make chemotherapy infusion areas more comfortable for cancer patients.”

This time around, dubbed “Together for a Common Cause II,” their efforts are under way in the memory of Andy Tyhurst, who lost his battle with appendix cancer last July.

“JWF bridges a divide between KU and K-State fans,” the group said. “Making cancer care more comfortable for patients is a big win for both teams.”

The area will be marked by pink balloons and more than 300 KU and K-State fans who have been inspired by JWF and Tyhurst and Pursley plan to put the Rock Chalk Chickenhawk and Little Brother barbs aside — at least before the game — to raise money for this great cause.

To donate or learn more about Saturday's fund-raiser, visit jamieswish.org or contact the Foundation’s head of media relations, Jamie Borgman, at (913)-568-8221 or jaborgman5@gmail.com.