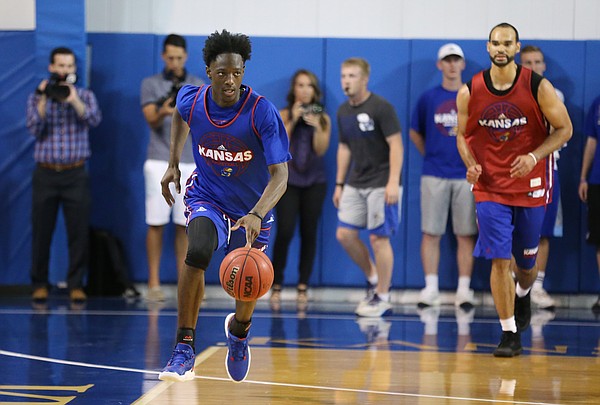 Blue Team guard Marcus Garrett brings the ball up the court during a scrimmage on Wednesday, June 7, 2017 at the Horejsi Family Athletics Center. by Nick Krug

Without so much as scoring an actual basket or helping the Jayhawks snag a victory that counts, freshman guard Marcus Garrett already has made quite an impression on Kansas coach Bill Self.

That’s because Garrett, the 6-foot-5, 180-pound Dallas native who has grown bigger, stronger and tougher every day since arriving in Lawrence last summer has carried himself like a veteran from the minute he arrived.

There is no immaturity in Garrett’s game. There’s even less in his demeanor. But he’s also not one of those overly intense athletes about whom the words, “Chill, man” come to mind when watching him operate.

Instead, Garrett is just sort of there, ready, willing and able to fill whatever role the Kansas coaches ask him to fill and having a blast while doing it.

The versatile guard so perfectly has fit into the Kansas basketball culture that Self constantly goes out of his way to mention Garrett when talking with reporters. Sometimes it’s his defense. Other times it’s his versatility. And still other times it’s the potential for him to be the one player best suited to fill the Josh Jackson role from a season ago, albeit not at the level that the future-No. 4 overall pick did.

His teammates like him. He already looks like the kind of player who has been around KU for years. And, the best part about all of it is that it seems incredibly likely that he will be around for at least the next three. That sets him up to have a pretty nice career and the early stages of it will be seen plenty this season.

Asked for his thoughts about Garrett during KU’s recent media day, senior point guard Devonte’ Graham’s face lit up when he started talking about him.

While that might be forecasting ahead a bit, let’s take a look at what to expect from Garrett during the 2017-18 season.

He Will: Become a KU fan favorite almost immediately

There’s a chance that this will happen without a lot of people even noticing. After all, this is still a team with Graham and Udoka Azubuike and Lagerald Vick and Billy Preston on it. And those guys, as well as others, figure to catch the attention of Kansas fans much more often than Garrett.

Still, there will be those moments, perhaps even once per game, when just about every KU fan out there finds themselves saying, “Man, I really like this kid,” when Garrett checks out of the game after a productive and no-frills four or five minutes on the floor.

The reason? He’s a hustler. Garrett knows how to play, he knows how to do what the coaches ask and, perhaps most importantly, he’s willing to take on whatever role is necessary to both get him minutes and help the team.

He Won’t: Play enough minutes to put up big numbers in any category

It’s obvious that Self likes Garrett and plans to use him. But let’s not get too far ahead of ourselves here. Remember, the four guards in the rotation ahead of Garrett are proven players with a ton of talent and even more experience.

The good thing about it, though, is the Dallas freshman who was a triple-double machine at Skyline High during his senior season, is capable of learning all four positions and therefore can spell any of the four whenever they need a break, be it for a breather or because of foul trouble.

That alone should allow Garrett to play in the 10-12 minute range on most nights. And, if the bigs get into foul trouble and he is asked to emulate Jackson by using his strength, length and size to hold it down at the 4 for a few minutes one night, his minutes will go up from there.

But even if he is on the floor for as many as 20 minutes a game, it’s not as if he’s suddenly going to be a No. 1 option in any area. As is the case with most freshman, Garrett’s numbers will come from him being ready to contribute whenever and wherever his number is called. But that role is not one that often fills up a stat sheet.

Quick hands, a good head, long legs and physical strength, Garrett is so gifted athletically that he can match up with just about anybody, 1 through 4, when he’s on the defensive end of the floor.

More than his ability to do it is his willingness, as Garrett has never seen a challenge he didn’t like.

It’s going to take a lot more than the solid defense he showed during the team’s exhibition trip to Italy to prove that Garrett can be a big time defender in the Big 12. But, again, the freshman is up for whatever role he can find that helps the team. And he’s smart enough to know that the fastest way to playing time with Bill Self is to become a tough and trustworthy defender.

Garrett will never have the too-cool-for-school vibe that some players exhibit which prevents them from giving all they have on the defensive end.

And being willing is half of the battle to becoming a good defender. The other half is listening to Self and his assistants, emphasizing team defense as much as individual defense and competing tooth and nail on every possession no matter who the opponent is or what the situation.

Garrett will do those things, he’ll like doing them and it will be easy to see when, night after night, he frustrates older, more experienced players, even if for just a few minutes.

Is Mitch the only scholarship player remaining?

his freshmen year can remind us of Grahams..Graham didnt play a lot as a freshmen, but when he did play he showed signs of being real good