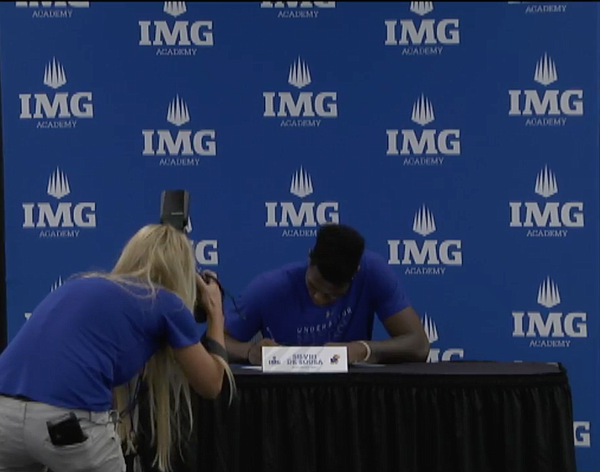 Kansas commitment Silvio De Sousa made his pledge to join the Jayhawks official on Wednesday morning during a signing ceremony at IMG Academy on the first day of the early signing period.

De Sousa, a 6-foot-9, 245-pound forward who was the first in the 2018 class to commit to Kansas, and he signed Wednesday morning in a no-frills manner, wearing a blue Under Armour T-Shirt in front of several IMG classmates from multiples sports, faculty and family members.

De Sousa, a native of Angola, officially committed to Kansas in late August while traveling back home to compete for his country in FIBA Afrobasket 2017.

Ranked No. 18 by Rivals.com, ESPN analyst Fran Fraschilla, who also does a lot of international scouting, told the Journal-World back then that De Sousa was one of the Top 10 players entering college in the 2018 class in his eyes.

De Sousa is the first of three 2018 commitments expected to sign national letters of intent with Kansas this week.

The early signing period began Wednesday and runs through next Wednesday. After that, any unsigned or future commitments will have to wait until the regular signing period next Spring to make things official.

With this trio already in the fold, KU’s 2018 recruiting class is ranked No. 2 overall by most national recruiting sites.

There’s a chance that soon could go up, as all four of Rivals.com’s national recruiting analysts recently predicted that five-star guard Quentin Grimes also would pick Kansas.

Welcome to the guys that have signed their letter of intent

Matt - Did you see Robbie Hummel's predictions on ESPN?

Have there been back to back POTYs from the same school?