One man's bold prediction for Kansas football. Kind of... 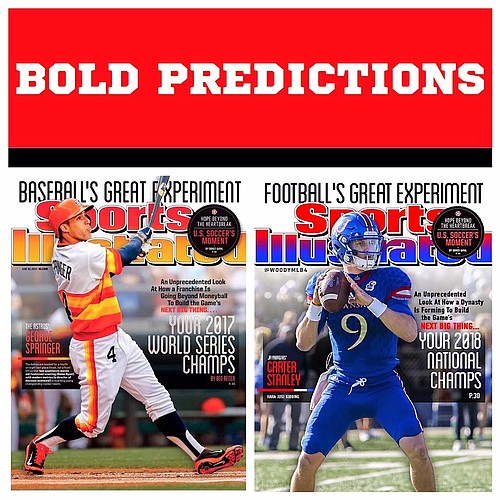 The two covers: The one on the left, from Sports Illustrated about the Houston Astros. And the one on the right from Bryce Wood about Kansas football. by Matt Tait

Now that it worked for Sports Illustrated and the Houston Astros, it seems like everybody is at least considering taking a shot at predicting the future.

The Astros, in case you don’t know, made good on a 2014 SI cover story that proclaimed them the 2017 World Series champs by knocking off the Los Angeles Dodgers in Game 7 of this year’s World Series on Wednesday night in L.A.

The win marked the first world championship for the Astros franchise, but, perhaps more notably, sent the rest of the sports world into absolute pandemonium over that 2014 Sports Illustrated cover.

Ebay and other such sites are currently selling that magazine for nearly $300 or more and its legend only figures to grow from here.

So how does this all relate to anything to do with KU Sports?

Well, thanks to Bryce Wood, a Washburn University graduate and Topeka native, we now know. Wood, a talented graphic designer who actually has done some freelance cover work for Sports Illustrated — including designing all four of this year’s NFL preview covers featuring Tom Brady, David Johnson, Aaron Rodgers and J.J. Watt — took to Twitter (@woodymlb4) to release his own mock SI cover featuring none other than the Kansas football team.

Themed exactly like that Astros cover from 2014, with KU quarterback Carter Stanley in the center, it reads, “An unprecedented look at how a dynasty is forming to build the game’s next big thing.... Your 2018 National Champs. P.30”

On the other side of the magazine, below his name and behind Stanley, who has the ball cocked high and ready to throw, reads, “Haha Just Kidding.”

So, obviously, Wood, who considers himself a fan of KU sports, is not actually predicting this accomplishment, nor is he going out on the same kind of limb that Sports Illustrated did three years ago with that Astros prediction.

But it’s pretty funny nonetheless and it shows two things — 1. How some KU fans currently are dealing with the football team’s struggles. And 2. Just how big that SI cover has become.

With KU sitting at 1-7 in David Beaty's third season, it's hard to imagine things turning around so drastically for this cover prediction to become true. Then again, the Astros were coming off of three consecutive seasons with at least 105 losses (in 162 games) and were 36-48 at the time the cover hit newsstands. 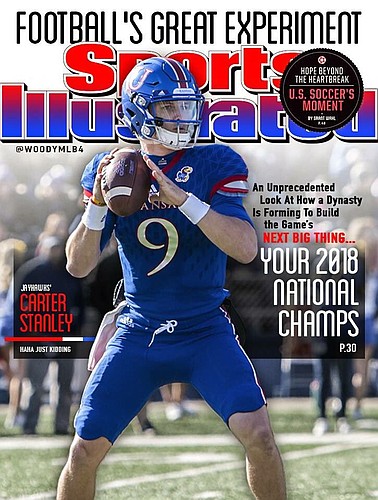 hey matt - are we ever going to see the results from the 'survey' some of us took at the beginning of the year about KU football? I believe it was stated it would be mentioned throughout the year.. did anyone else complete it? our we so bad that noone cares anymore? thought that was a good idea and would just like to see where we all stand. thanks!

Only 11 questions of the original 35 have actually been decided, so tons of people are bunched up and there isn't much to report...

CURRENT LEADERS (of a possible 11 points):

And if you want to see how you stack up with our staff (descending order):

Yeah. Scott Chasen is going to tally those up, but I'm sure he's waiting until the end of the season to make sure all results are final. We'll get 'em, though. Just a few more weeks.

And, yeah, we got a ton responses, so it won't be the most fun thing for him to compile, but he'll grind his way through it!

any way we can see the questions again, or they can be posted somewhere to follow along? that google doc doesnt look like it can be opened or seen again? thanks!

One of KU's slogans is Bold Aspirations. This is the boldest. I'd give it a few more years but it can be done. We'll know after Baylor if it will be done by this crew. This program will have to built almost from the ground up. It's almost as monumental as WSU reestablishing football. At least there appears yo be the will to do it.

as bad as KU football has been since 2009, if WSU were to restart their FB program right now, they could still beat KU..this KU run reminds me of how bad KSU was back in the 1980's..its hard to believe a D1 team can be THIS bad for this many years..I mean, 10 years of 1 or 2 win seasons..even Iowa State has built a winning program(for now until their coach leaves)..Hell, Kentucky has been historically bad and even they have been more competitive lately..

if it doesn't happen, it will be because of the SI jinx.