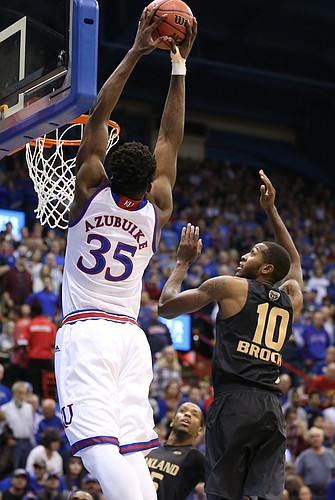 Kansas center Udoka Azubuike (35) gets up for a lob dunk against Oakland forward Isaiah Brock (10) during the first half on Friday, Nov. 24, 2017 at Allen Fieldhouse. by Nick Krug

Quick grades for five aspects of KU’s 102-59 win over Oakland on Friday night at Allen Fieldhouse.

It wasn't as electric as Tuesday's 3-point barrage against Texas Southern, but it was pretty darn efficient. And the Jayhawks earn extra credit for sticking to the game plan of pounding it inside to Udoka Azubuike (when he was out there) and fulfilling their coach's wish of proving they can score inside when they need to, as well.

The Grizzlies got into the paint plenty and mostly struggled on offense because they flat-out missed shots. Kansas was OK defensively but also missed a few too many assignments, struggled at times with communication and lost its intensity in the second half while playing with a huge lead.

Azubuike set the tone with a wildly effective first five minutes and Mitch Lightfoot did a terrific job of keeping the bar high while spelling the big fella for the next eight minutes. Lightfoot was incredibly active in the first half — and with a purpose — and Azubuike showed throughout the night why he's such a tough player to handle when he gets near the rim.

Downgraded for their ole' defense, the KU guards were as good as they needed to be to win this one going away, but hardly left anyone oohing and ahhing the way they're capable of doing.

A relatively quiet night for Marcus Garrett (this time on the stat sheet, too, until garbage time) combined with Lightfoot's best game of the season to date brought this one to the brink of the A range.