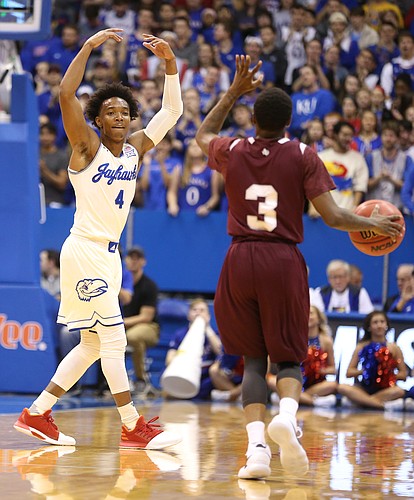 Kansas guard Devonte' Graham (4) raises up the Fieldhouse after a string of buckets during the first half, Tuesday, Nov. 21, 2017. by Nick Krug

55 percent from the floor, 53 percent from 3-point range, a school record 19 made 3-pointers, just seven turnovers and 17 offensive rebounds. All of that, and so much more, led to an easy and entertaining night for the Kansas offense, which enjoyed seven players reaching double figures.

Coach Self can nitpick this one, but I'm not going to. Any time you beat somebody by 40 points while limiting them to 37 percent shooting and a -16 mark on the glass, you're going to get an A from me. This was never a game and even though the KU offense was a big reason for that, the defense certainly did its part to help.

Udoka Azubuike fnished one rebound shy of a double-double (20 points and 9 boards) and made 9 of 12 shots from the floor. All of those numbers are good but Self seemed a little less than thrilled about Azubuike's overall night. Add to that the fact that Self pointed out the 3 rebounds by Mitch Lightfoot in 23, while adding, “He's got to do better,” and KU's thin frontcourt gets a passing grade but not an A.

Of KU's guards, Graham shot it the worst (6-of-16) but made up for it with 11 assists. Malik Newman, meanwhile, shot 4-of-6 from 3-point range but also took a couple of bad shots and turned it over twice. There were a few things from the KU guards that were far from perfect — particularly their energy in the second half, but, hey, human nature, right? — but nothing that even threatened to take this down from a solid A.

We might as well call this the Marcus Garrett grade and he was terrific. Thirteen points, 11 rebounds, active as always. What a luxury it is for the Jayhawks to have a player like Garrett, who is so steady and wise beyond his years and can fill in at any one of KU's four guard positions.

what a strange year, so far Svi and Vick are lightin it up. Graham and Newman are so dangerous. Azu is a monster. Garrett is so tough. Lightfoot is contributing.