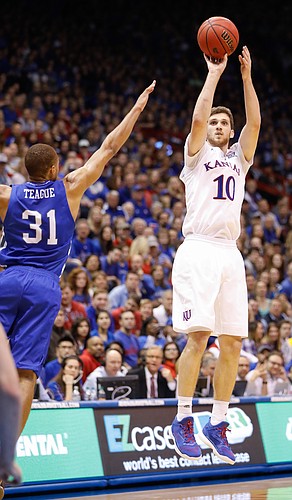 Kansas guard Sviatoslav Mykhailiuk (10) shoots in one of his two three-point baskets in the Jayhawks 95-57 win against UNC Asheville Friday night, Nov. 25, in Allen Fieldhouse. by Mike Yoder

While most people I talked to, both in our business and others, eventually came to believe that Kansas junior Svi Mykhailiuk would stay in the NBA Draft and skip his senior season at Kansas, nearly everyone I talked to seemed to think that Svi’s return to Kansas, should it happen, would have been little more than a luxury for the Jayhawks.

Now that we know the verdict, a deeper look shows that the junior guard’s decision to stick around for one more season — Svi announced Wednesday evening that he would return to KU for his senior year — was actually pretty crucial for KU.

Say what you will about Svi’s game, his defense or his mindset on the floor. The guy did enough during the 2016-17 season to inspire KU coach Bill Self to put him in the starting lineup for 25 of the 36 games Kansas played. When taking into account the fact that five of those 11 non-starts were games in which Self elected to start just three guards instead of four, the young Ukrainian actually really started more like 81 percent of KU’s games a season ago.

Given the number of new and young faces that will make up the Kansas roster during the 2017-18 season, bringing a player like that back is absolutely huge.

Had Svi left, Devonte’ Graham’s 36 starts and six apiece for Lagerald Vick and Udoka Azubuike would have represented all of KU’s starting experience on the roster. Now, instead of just 48 starts, the Jayhawks are returning nearly 30 more.

And that’s important whether Svi even stays in the starting lineup or not.

Enough of a possibility exists that has Lagerald Vick taking another monster step and becoming so talented and productive that it’s impossible to keep him out of the starting lineup.

If that happens, Svi’s return becomes even more important because he will represent a legitimate and experienced body on the bench.

Had he decided to leave, Vick would’ve almost certainly slid into the starting lineup, leaving only incoming freshman Marcus Garrett and second-semester transfer Sam Cunliffe as backcourt options for Self off the bench. Both are going to be good, perhaps very good, players at Kansas. And they might each have big roles as soon as next season. But neither could come anywhere close to bringing the same kind of savvy, experience and veteran presence to the team as Svi can.

And let’s face it; when you’re talking about a team coached by Self, that’s worth a lot. There are few things Self likes more than reliable players whom he can trust. And if he trusted Svi enough to start him 25 times last season, you know he’ll trust him enough to play just about whatever role one can imagine as a senior.

Included in that last thought is the potential for Svi and Vick to play on the floor at the same time some next season.

Graham and Newman next year will be what Frank Mason III and Graham were this year. At least in terms of minutes. So they’re gonna play a ton. But that four-guard look, which worked so well for KU last winter, is no doubt something Self will look to use again next season and Svi will play a huge role in making that possible.

He’s no Josh Jackson. Very few are. But he has the necessary size and, more importantly, the experience in that system to make it an option for the Jayhawks, who once again will have limited depth and experience in the front court.

Don’t expect Self to use the four-guard look anywhere close to as often as he did this season, but he already has said this offseason that his team’s personnel in 2017-18 will dictate that he’ll have to use it at least some. Svi’s return makes that a much more comfortable thought.

Could the Jayhawks have fielded a damn good team next season without Svi on the roster, one that would have been well positioned to challenge for all of the accomplishments Kansas basketball fans have become to celebrating for years? You bet.

Newman and Graham are a dynamic one-two punch, Udoka Azubuike stands to be a different maker down low and with Vick poised to take another huge step and five-star freshman Billy Preston in the mix, the Jayhawks, right there, would have had five pieces that most teams would kill for.

But bringing Svi back as a sixth piece gives the Jayhawks the one thing that has helped set them apart from so many others during Self’s first 14 seasons in town — enviable depth.

Beyond that, the Svi the Jayhawks are getting just might be — and probably should and will be — the best version of the young gun that Kansas fans ever have seen.

Armed with the senior urgency that comes with knowing it’s your last shot to win a title (which should inspire him to take more ownership and be more of a leader for the young guys and newcomers), and also with fresh and rock solid feedback from NBA folks about what they want to see more of, Svi is in line to make his biggest jump yet, both of the physical and mental variety.

If he does, Kansas once again will be a tough out from beginning to end and the young Ukrainian who took his decision all the way down to the wire will be glad he did and even more glad he chose to come back.

Glad to have Svi back.

The real void, of course, is Frank. Last year, we looked lost every time he left the floor. Neither Devonte or Svi have shown consistent leadership ability to-date. If they can, if they can get the old alpha-dog mentality, then this team has real potential.

No one expects the type of leap from these guys that Frank made his senior season, but both of these guys need to get serious about trying.

Also, for the record, Malik Newman, Jack Whitman, and Sam Cunliffe all have college starting experience, just not at KU.

Fair point. And I do think that's worth something.

But starting at those other schools is definitely not the same thing as starting at Kansas. That's not a knock on those places at all, more just a mention that there are different things required by Self at Kansas to earn your way into that starting lineup.

I certainly didn't know what he would do, but this is what I thought he should do all along. It seemed clear to me that Svi didn't want to play in Europe and take his chances to get into the NBA and that the NBA has been his goal. If he was willing to play in Europe he would have left after his sophomore year.

The past couple of years it seems like some of the guys deferred a bit to the Sr. player, Frank to Perry and Deonté to Frank. Hopefully this coming year Svi and Devonté will both feel that sense of urgency and both play to their full potential. If they can pull that off, with the other talent on the team, it's going to be a great season.

Anyone else feel like we now have a major logjam in the backcourt? This season we will now have Graham, Newman, Svi, Vick, Cunliffe (2nd semester) and Garrett. I think Garrett will play some the first couple months but I can see Cunliffe stealing his minutes once he becomes eligible. With Coleby gone I think there is a very good chance that we will be playing a 4 guard lineup a lot this season.

I don't at all feel we have a log jam in the backcourt, especially knowing our personnel will require we play the 4 guard lineup a lot. I can't see Azubuike on the court much more than 20 mpg. I also don't see Preston playing more than 20 mpg. Nevertheless, the coaching staff will be working overtime, again, to figure out the offense to play our best players.

Excellent analysis, Matt. I will admit that I didn't expect Svi to return, but I am glad that he is returning. His experience will definitely be a plus, and if he can branch out a little to perhaps play the "4" slot on occasion, then he will enhance his value at the next level.

The fact is that he is a "young" senior, who has loads of potential as he improves his skills with the ball and on defense. Would love to see him become more of a "slasher" somewhat similar to Keith Langford.

Svi's return was/is a pretty big key, in my opinion. Here's my take.

Coleby's transfer was a head scratcher (again, in my opinion, and the whole scholarship availability thing pushed aside). With Doke being the only returner in the post with any experience at KU, and limited time at that, I thought Coleby, with a finally 100% healthy knee, could have started the season at the 4 spot with Doke at the 5 in the early going.

Cunliffe isn't eligible until early December, and with the Coleby transfer and a lack of experience in the post again (just as last year, bless you Landon Lucas), I was sweating Svi coming back, because I think the 4 guard lineup is going to be necessary again this year. Maybe not 95% of the time like last year, but at least half the time.

But, consider this. Is that really a bad thing? If the opposition has the ability to defend the post, you go with the guard heavy lineup. If they try to adjust, then you bring in Preston or Whitman and go big on them.

In the end, I think Svi is an important cog in the chess match for 2017-18 that Coach Self can levee on opposing coaches. It may not have been all that big a deal had Coleby stayed, but my opinion is that it was a pivotal for Svi to decide to stay when Coleby left. Matt already mentioned his leadership opportunity with so many underclassmen this year, so that in itself is a big add for this coming season.

To heck with the NBA. I like Svi playing for the Hawks. When his shot is dropping, Svi can bury opponents and end games in a good way.

Svi needs to work on a higher arcing shot. His three pointer is too flat and hard and has to hit the middle of the rim just right to consistently go in.

I feel that in order to both help the team and make himself draft worthy, Svi needs to demonstrate that he can get open all by himself for the outside shot. That will require ball handling and driving abilities.

Teams don't need to draft players who are limited to shooting outside set shots. You can easily pick up that kind of player outside of the draft.