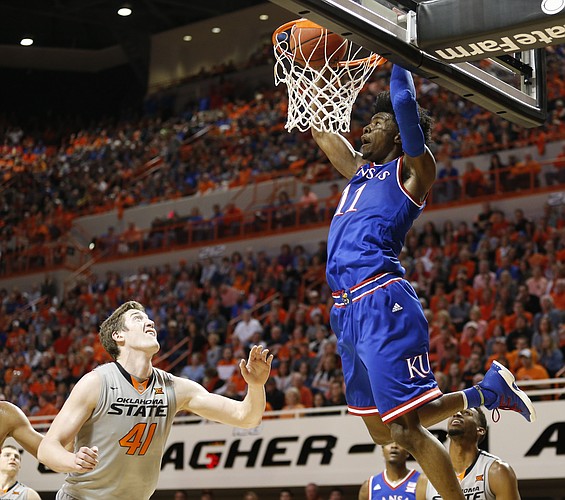 Kansas guard Josh Jackson (11) gets in for a lob dunk during the first half, Saturday, March 4, 2017 at Gallagher-Iba Arena. by Nick Krug

Quick grades for five aspects of KU’s 90-85 road win at Oklahoma State in the regular season finale in Stillwater, Okla.

90 points, 55.7 percent from the floor, 42.9 percent from 3-point range and 76.5 percent from the free throw line (11 percentage points better than their season average), all in a hostile environment. The Kansas offense was terrific from start to finish and, perhaps most importantly, had an answer every time OSU made a run.

KU surrendered 85 points, but part of that was the product of Oklahoma State just flat-out playing. The Cowboy’s offense was nearly as good as Kansas’ but one of the biggest differences in the game was KU’s ability to string together stops. OSU shot 42.3 percent from the floor and made just 12 of a season-high 36 3-point attempts. Kansas also out-rebounded Oklahoma State, 42-30.

Landen Lucas was rock solid, especially as a scoring threat in the post, and he even got help from Carlton Bragg Jr., in this one. Bragg finished with 11 points and 3 rebounds in 18 minutes and served as the perfect complement to Lucas, who finished with 10 points and 7 boards in 29 minutes.

Mason, Graham and Jackson all had big nights and Lagerald Vick’s only blemish on a 9-point, 8-rebound night was his three turnovers. Still, KU’s guards carried the day, all with another sub-par performance from struggling junior Svi Mykhailiuk, who finished with 3 points on two shots, four fouls and one turnover in 12 minutes.

If KU gets the rest of the way what it got from Bragg and Vick in this one, the Jayhawks will be tough to beat. Both came off the bench and provided energy, production and a little spark in helping KU holding off the Cowboys.

It's pretty clear now, that it does not make much sense to have Svi come off the bench. Actually Vick and Bragg, and maybe Coleby, actually provide some difference and spark.

Svi is finally going back in double figures, or we are going out of the tournament(s).

Today, he simply got in foul trouble. It appears his real slump might be in his defense. Teams have been picking on him with the drive, and he has had a hard time with it. This I think has affected his offense.

maybe it's just me but it seems like teams are locking down on defense on svi. if that's the case then by all means this is not a slump, he is drawing defenders away from the rest of the team. it looks bad on him numbers-wise but also points to how other teams perceive him as a threat. I know this year isn't over yet but man! Imagine winning it all and bringing back graham, vick, svi and bragg next year. could kansas pull a florida and do back to backs? I believe we could.

Given how many times KU has been a 1 seed and hasn't even made the Final Four, I'd settle for one title at this point before worrying about winning it back to back.

his defense is sub-par. many big12 opponents have used the strategy of drive on Svi. as a player, that can put your head in a bad place. additionally, our scouting report is sure to list him as the #1 3 point threat so he's not going to get forgotten about very often.

that being said, if he improves into next season at the rate he improved into this season he's going to be very exciting to watch next year.

I seriously doubt that Svi would be listed as the # 1 3-point threat. In fact, I don't think he'd be number 2. Frank would obviously be first, and Devonte would probably be second.

Err.. not to be nit-picky, but #rebounds produced by Lucas & Bragg is far less than by our trio estupendo amigos.

Best game I've seen this year from the entire team. Mason, Jackson, Graham, and Lucas all looked good to great. Solid contributions from Bragg and Vick. This team will go very far if it can repeat that performance in the tournament.