Where things stand in the recruitment of 2017 PG Trevon Duval 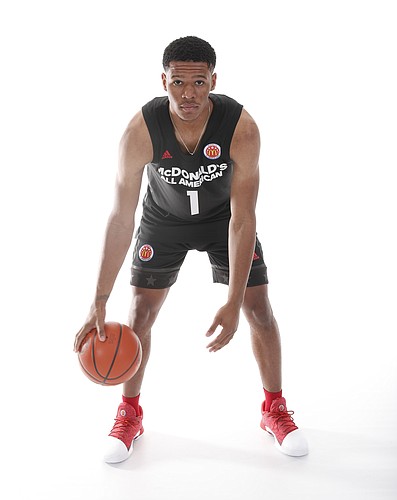 There are plenty of questions about the immediate future for Kansas basketball worth examining, but by far one of the biggest — and most important — has to do with who will play point guard for the Jayhawks during the 2017-18 season.

While there are options out there, from uncommitted seniors in the Class of 2017 and players who recently de-committed from other schools to graduate transfers and even the junior college ranks, the top two options for the Jayhawks easily are current junior Devonte' Graham and prep standout Trevon Duval, who is playing at the McDonald's All-American game in Chicago this week.

The interesting thing about these two options is that they might be closely tied together. In an interview with Rivals.com's Krysten Peek in Chicago, Duval referenced Graham when talking about the Jayhawks and where things stood with his recruitment.

On the surface, it makes sense that Graham staying would scare Duval off of coming to Kansas. The No. 3 player in the 2017 class, according to Rivals, is a big time player, who wants the ball in his hands and has the potential to explode onto the college scene. If Graham's back for his senior season, it's easy to see how one could think that Duval may not get that opportunity, at least not 100 percent of the time.

On the other hand, though, the 2016-17 season showed that Duval really does not have much to worry about. With Frank Mason III handling the point, Graham was great in a supporting, off-the-ball sort of role and could easily fill that role again.

The possibility also exists that Graham and Duval, should both be Jayhawks next year, could find a way to share the role more than Mason and Graham did, giving each an opportunity to play some point and also play off the ball.

It's also worth considering that Duval may want to play with Graham and could be waiting for his decision in that context, as well.

Regardless of how that would look on the floor, there's little doubt that KU coach Bill Self — and Graham, for that matter — would find a way to not only make it work but make it work well.

Duval is a serious talent who could come in and start right away, with or without Graham in the lineup. He plays fast, he's physical and he can score inside and out. He seems in many ways like exactly the type of point guard Bill Self likes and would be a terrific replacement for Mason.

Duval has a final five of Arizona, Baylor, Duke, Kansas and Seton Hall and told Peek this week that he would like to make a decision in April. The April signing period begins April 12 and runs through the middle of May.

There've been rumblings about Arizona and Duke emerging as the favorites for Duval, but, from everything I've heard, the Kansas coaching staff is still in it and continues to go after him with the belief they can still get him.

As long as Graham returns, landing Duval is not a make-or-break proposition for the 2017-18 Jayhawks. But having them both in crimson certainly would elevate KU's prospects heading into next season.

Here's a quick look at Duval's most recent take from the McDonald's game on his five finalists, which also can be seen in the video above. This year's game is set for 6 p.m. Wednesday on ESPN from the United Center in the Windy City.

On Arizona: "The coaching staff says they need a point guard in this class. They need someone who can play with DeAndre Ayton and if Allonzo Trier comes back someone to get him the ball. They're just telling me I can really be the one to help their team out."

On Baylor: "My old teammate, Mark Vital, has really been in my ear just talking to me about the team and picking my brain to see what I like in a school and he said, 'Baylor's the perfect place for you.' "

On Duke: "Their fan atmosphere for games was definitely crazy. They cheered my name during the game and asked me to come sit with them so their fans are really into it. Gary (Trent Jr.) and Wendell (Carter) are both in my ear. You know I haven't heard anything but Duke from them since I've been here so they're recruiting pretty hard."

On Kansas: "Billy (Preston) is recruiting me too. He's telling me they need a point guard so everyone's doing a little bit of recruiting. I'm going to wait to see what Devonte Graham does and a few other people before I make any kind of decision."

On Seton Hall: "The visit was great actually. I've been to their campus a couple times, I've seen it but to visit during the Big East tournament was really special just to see how that all goes. Plus they get to play in the Garden so that was special."

OK, so he's waiting to hear what Devontae decides to do. I, for one, would take one more year of Devontae over a highly ranked freshman. All day long.

It could also be he wants to team with Devonte'.

Who is Devontae? Sorry, Phil. I usually don't care about misspells but we should at least get the names of our players correct. Devonte' Graham

I have heard that we might have a shot at Jeremiah Tilmon depending on what he decides to do at Illinois. That would really solidify our front court. After this year, I hope to never see such a glaring weakness although Coach Self did a masterful job of minimizing it right up until our final game.

Amen Marius.. We need front court talent for sure..

You people are all underestimating 2 people, Malik Newman and Marcus Garrett. Newman is looked over, but when he was being recruited he was really a big deal. See his clips on youtube. He is a natural for Self's system. He will start at 2 guard, and so that means Duval, not overlooking Newman, knows that if Devonte was to come back, that would definitely mean winning the point guard spot. No Devonte and he would be the man. In fact Marcus Garrett will also surprise you in that he can play both guard spots.

As much as I like Devonte, I believe Duval and Newman would really be something together.

I agree that the way he talked about KU in Chicago, it sounds like we are definitely in the game. Rock Chalk

If given the option, I'd go for Graham every day of the week over any freshman, especially a OAD freshman.

With regards to Garrett http://sportsday.dallasnews.com/high-school/high-schools/2017/03/20/kansas-signee-marcus-garrett-skyline-named-gatorade-texas-boys-basketball-player-year), I've seen him play a few times over the past couple of years. He's been exceptionally well coached to play defensive and team ball. He'll for sure get minutes, even in conference play, but he's nowhere near ready to lead an elite team like Kansas. Jo Jo White and Darnell Valentine were the only two Kansas PGs who were capable of doing that. However, if Graham leaves, either Duval or Graham will need to step up fast to lead the team. We are going for the San Antonio title defense this next season!

Tait tell us how to remove the purple Scottrade pop up that blocks part of the message. Just the last few days.

Installed! No effect! What's next?