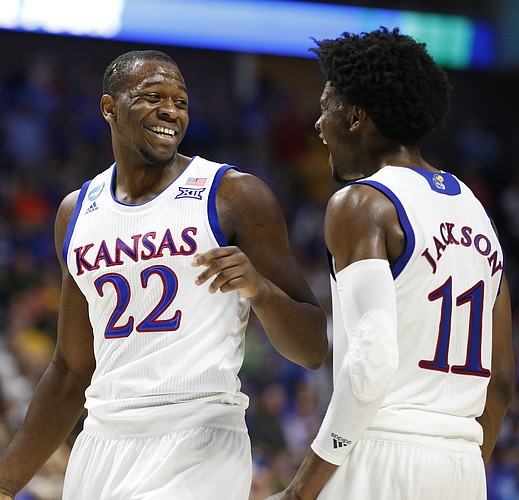 Kansas forward Dwight Coleby, whose nine second-half minutes in Sunday’s second-round NCAA Tournament victory over Michigan State were as important as any played by any player in the game, prides himself on being ready.

But more than that, the 6-foot-9, 240-pound native of the Bahamas prides himself on his easy-going personality.

It’s hard to say that there was a direct correlation between Coleby’s island upbringing and his performance during Sunday’s 90-70 victory, but Coleby believes it could have played a role.

“Yeah, that’s my personality, just calm, relaxed and just focused,” he said. “It probably comes from where I grew up.”

A city of nearly 300,000 people on the island of New Providence, Coleby’s hometown of Nassau is one of the most popular tourist destinations in the region and is a popular stop for cruise ships and tourists seeking good snorkeling.

The KU junior who is majoring in communications studies, attended high school in Mississippi (The Piney Woods School) before playing two seasons at Ole Miss and then transferring to Kansas.

Always the biggest and tallest player on his teams growing up, Coleby said he considers himself more of a power player than anything else and always has enjoyed games that feature physical play inside.

“I think I’ve got some kind of muscles for something,” he joked. “More power. I’ve always been that, one that wants to play physical and with contact.”

It was not just his muscles that propelled Coleby into the player of the game conversation following top-seeded KU’s latest victory. He also used his head, and not just on the floor either.

“That was a thing I talked about to him before the game, and this is from my experience of coming off the bench when I was doing that at the time,” said KU senior Landen Lucas, who played sparingly during his first two NCAA Tournaments. “When you’re on the bench early on, you gotta watch the game and understand how you can be effective, see what’s working for the other guys out there. He might’ve picked up on a couple things, and once he got out there, it was just fun to watch at that point in time. The whole team was playing well together and he did a lot of little things that didn’t show up in the stat book that ended up being the difference in the game.”

Just for fun, let’s take a look back.

• Coleby checked into the game for the first time at the 12:14 mark of the second half, nearly 30 minutes into the game and more than 90 minutes after the opening tip. His first stint on the floor was uneventful and lasted just 23 seconds, as Lucas came back in for him at the 11:51 mark.

• Coleby checked back in for Lucas at the 10:38 mark and, within his first minute on the floor, grabbed two big defensive rebounds in a game in which Kansas led by just five points at the time. The second rebound came after a missed jumper by Frank Mason and Coleby immediately went back up with it to put Kansas up 62-55 with 9:42 to play.

• His third of four rebounds came at the 8:39 mark, nearly two minutes after checking back in, and led to a huge roar of approval from an appreciative KU crowd and a pure free throw that put Kansas up 65-57. Coleby missed the second, but it hardly mattered. His work came on the other end where he kept Michigan State’s Nick Ward from grabbing the offensive board and also drew Ward’s fourth foul, which sent him to the bench.

• At the 7:27 mark, 3 minutes and 11 seconds of clock after he checked back in, Coleby went to the bench and Lucas returned. Forty-four seconds later, Lucas picked up foul No. 4 and had to sit with 6:43 to play and Kansas leading by just six. No one knew at the time that Lucas would not be needed again. During his next stint on the floor, Coleby picked up a steal that led to a layup by Josh Jackson (77-65, Kansas) and an offensive rebound of a missed 3-pointer by Jackson that turned into a 3-pointer by Devonte’ Graham (80-67, Kansas). “Huge. Huge,” said Lucas of Coleby’s offensive rebound, which he called one of the biggest plays of the game. “That’s the little things that end up making a big difference in the game. Go from a missed 3 that could’ve been a run-out and, instead, Devonte’ hits the 3. That’s big. That’s what I try to do when I’m in there and he came in and replaced me and I’m proud of him.”

• So charmed was Coleby in this game that even plays that might draw grumbles during most games drew applause and positive nods. The most obvious was his foul on MSU freshman Miles Bridges with 3:12 to play. Instead of letting Bridges go up for an easy two, Coleby hammered him and made him earn the points at the line. Bridges made one of two free throw attempts and Kansas answered with another 3-pointer by Graham on the other end. Net two points for KU.

• From the 6:43 mark to the time he sat for good, Coleby played the game’s next 5 minutes and 16 seconds and did not check out until Kansas led 87-70 with 1:27 to play. Lucas, still with four fouls, came in for him then, but, at that point, it was as much so Coleby could walk off to a hero’s ovation as getting Lucas back in the game. The game was over.

With Coleby’s confidence sky high and his teammates’ faith in him now even higher, the Jayhawks could not help but flash huge smiles of pride and joy when discussing all that Coleby did to help the Jayhawks get back to the Sweet 16 for the second year in a row.

“Perfect timing,” said sophomore Carlton Bragg Jr., who struggled against Michigan State’s physicality. ““He’s been working all year and tonight he stepped up when his jersey was called.”

Added Coleby: “I always wanted to do something like this on the biggest stage, and to have an opportunity to do it is just great.”

Coleby is one of those guys I just can't help rooting for. Works very hard, stays ready, always smiling, at least in public. Good game, Dwight Coleby! And here's to even bigger things the rest of this season and next.

Next up, Carlton Bragg. He's had a rough season after high expectations. But he's also had to play a position out of his comfort zone for much of the season. I'm betting he gets it together and we see the real Carlton Bragg next season. I'm pulling for him.

I, too, have good expectations from Carlton. He has had tough times for much of the year, but has shown glimmers of real talent. Maybe it's KU's small ball style of play, and he just doesn't fit quite right. Just don't give up.

Love that Coleby came in and contributed, even the first of a one and one goes down where he has had less than good results. His smile is as great as Mason`s scowl.

Bragg is a complete mystery. He is soft, seems out of place and has little energy. Why is it that he goes up with close in shots and tries to bank it in as opposed to jamming them with some force? He even makes some of them a fade away and turns a layup into a miss. Ive seen him stand and watch lose balls roll around his feet without any effort to dive on the floor and wrap it up. Theres no passion here. SAD! There used to be a stat and maybe still is where a player is measured by plus or minus for the time he is on the floor and related score. If that is still being used, Bragg has to have a huge minus sign after is name.
Its often been said we have no bench [outside of Vick]. With Bragg its even a deficit except for a couple of games. Two out of 34 doesn't get er done.

I see both sides. First of all, Bragg is being asked to play out of position, but we all have to do that at work, right. Somebody is sick, or in the hospital, we pick it up. Bragg's game is much more like Perry Ellis, not rebounding and slugging it out in the trenches. Althoug Perry could rebound. Still, it's attitude and energy that seem to be lacking, and strangely, even though Bragg is bigger than last year, he seems to be weaker. He certainly seems slower, and he has bad hands this year.

Having said all that, we should all want him to get it right, I still believe that our season is going to come down to Svi, Vick and Bragg. Each one of them is going to have to have one great game in this tournament run. Sadly, Bragg seems the most likely. Perhaps Purdue, because Bragg might be able to cover Swanigan on the outside, as he often roams away from the basket. In any case Purdue has 2 big men, with Haas, and we may have to play 2 big more than we have in most games.

Rock Chalk Carleton, start your campaign to start next year, this year.

coleby saved my heart. i was on the edge there for a minute. and if you're going to miss a shot in a 1-1 be damned sure it's the second shot.

I would bet that Coleby will play huge minutes in the Purdue game, as his bulk could be exactly what we need to help mitigate the Boilermakers' size. In fact, I would guess that there will be a few times when we have both Lucas and Coleby out there together.

Coleby needs to be promoted ASAP to first Big off the Bench to spell Lucas. I can hear Norm "Roberts Rules of Order" now, I nominate Dwight Coleby to play the Backup 5! Bill Self will second the motion, I believe. Bragg needs to play only the 4 position.

We've seen a little of Bragg at the 4 recently, not a very large dose. Perhaps Coach will get more comfortable with Coleby as Coleby gets more comfortable on the court. This would open things up for Bragg to spend some time on the floor at the 4. That would give Jackson a rest and give Vick the opportunity to spell Svi and really add to the rotation and the view the opponents get. The issue is going to be that if and when Bragg is on the floor at the 4, he's going to have to be productive.