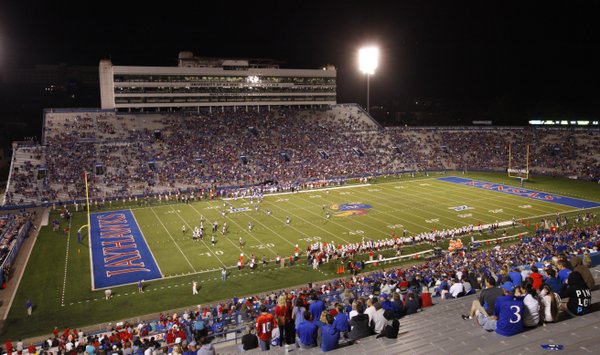 Last week, while Kansas fans were speculating, dreaming and debating about what the $300 million announced renovation budget for Memorial Stadium could look like and include, Dennis Dodd of CBSsports.com had another thought.

And it was a good one.

Sure, Kansas fans everywhere would like to know what that money will be used for and how the project will look when completed.

For what it’s worth, both are sharp, modern venues and either direction would go a long way toward improving the Kansas football experience.

But, as Dodd pointed out, there’s much, much more to the story here than the fact that all of that coin can deliver shiny new concession stands, an upgraded wireless experience and a much better looking stadium, inside and out, top to bottom.

There’s also the statement about what this kind of commitment means for the program and the university. And there’s no denying that it means a ton.

One of the more popular groans I’ve heard throughout the years about the Kansas football program is that athletic director Sheahon Zenger and his department are not committed to football. Those who know him and have been paying attention know that could not be farther from the truth. Suggesting otherwise is laughable.

But in the world we live in today, it’s dollars not determination that shows commitment, so all of that behind-the-scenes stuff and all of those hours of sleepless nights or endless meetings don’t mean nearly as much to the general public as the sound of a $300 million commitment to renovating the stadium.

Today you’ve got both, and now the real fun can begin.

While the public won’t know exactly what the plan is until blueprints are released by KU sometime in September, what is known today is that the Jayhawks are serious about positioning the program to be in as good of shape as possible for the near future and beyond.

The reason that’s so important, as Dodd points out, is something we’ve all heard for years now, so much so that it almost has become common knowledge for fans of all ages — it’s football that drives realignment and will shape the college athletics landscape of the future. Not having your shop in order in that area could be devastating.

Zenger knows this. He always has. And he’s spent hundreds of hours contemplating all of the things Kansas can do to get on the right track in the event that realignment rears its ugly head once more sometime in the near future.

While things have been calm and quiet at the Power 5 level for the past few years, those grant of rights agreements are eventually going to expire and, when they do, it’s anybody’s guess as to where things go from there. Better to be prepared well in advance than to be forced to scramble if/when it all goes down.

And so the Jayhawks are doing just that. Forget the $300 million stadium plans for a second. That’s big. Huge, in fact. And it will go a long way toward showing the world — read: television networks and Power 5 conferences — that KU is serious about football again.

But there have been plenty of smaller, less-talked-about signs that say the same thing along the way.

The first was hiring Beaty in the first place. In doing so, Zenger put an end to the idea of dishing out disproportionate salaries to football coaches taking the Jayhawks nowhere and provided the program with the foundation it needed for a true rebuild. As was said when Beaty was hired, the process was going to take time and patience would be important, but as Beaty and company head into Year 3, things definitely appear to be headed in a better direction.

The second came last year, when Zenger extended Beaty’s contract and doubled his salary. While that meant bumping his compensation from $800,000 to $1.6 million, numbers that pale in comparison to the $300 million renovation budget, it also meant that the Jayhawks were serious about providing this guy what he needs to keep the momentum moving.

Don't overlook Zenger's recent extension itself in this whole thing, too. It's much easier for an AD to ask for $300 million in donations if there's an indication that he's going to be around long enough to make sure the money is used the way donors are told it will be.

The third and most overlooked aspect of KU's commitment to football was to Beaty’s coaching staff. Rather than using money to make hires elsewhere in the department — needed or otherwise — Zenger set aside a significant amount of cash for Beaty to use on his staff. While a big chunk of that went to new offensive coordinator Doug Meachem — who, for what it’s worth, absolutely could be a difference-maker right away — it also allowed Beaty to bump up the salaries of several other assistant coaches, most notable of which was Tony Hull, whose ties to Louisiana have been an enormous part of KU’s recruiting success of late.

Those three things were all in place well before any kind of $300 million stadium announcement saw the light of day. And together, those moves, along with a handful of others, (most notably the million-dollar renovation of the football locker room) should put an end, once and for all, to the ridiculous talk about KU and Zenger not being committed to the football program.

They are. It’s as clear as can be. And, if Dodd is right and realignment does hit hard again in the next 5-8 years, it’s moves like these that could keep Kansas — and, therefore, it’s blue blood basketball program — relevant among the rest of the power players in college athletics.

When I saw this announcement about the $300 million renovation the first thing I thought was this was a chess move to keep KU in a Power 5 Conference. The renovation itself is incredibly exciting, but it's also reassuring to KU fans that 1.) Zenger and staff are 10000% committed to KU football and 2.) our future looks much brighter as far as conference realignment goes.

The twitterverse definitely exploded with several references to KU (and some other schools like OU) preparing itself to move to another conference (maybe the B10). Very smart move.

It's hard to believe that this isn't about eventually landing in either the PAC10 OR B1G10, right? Anyway, it's about as big as hiring Bill Self. It is hard to understate just how important this is.

Interesting that we bring up TCU. They were in the Southwest Conference for years despite having a mediocre football program. When the SWC disbanded, TCU was on the outside looking in for BCS conferences. They began reinventing themselves and became a non-BCS power, and after changing conferences a few times, they finally got into the BCS/Power 5 club by joining the Big 12. But had they invested in football years before, it wouldn't have taken them over 15 years to get into a respectable conference. It is good to see KU being proactive instead of reactive.

One of the most underappreciated keys to having a successful football program (and athletic program in general) is stability. To say that KU's football program has lacked that stability for years would be a huge understatement. Being committed to Beaty and Zenger for the long haul certainly can't hurt in the march towards respectability (and hopefully well beyond that).

As a KU Architectural graduate and a registered architect for over forty years, I am very interested in exactly where the 300 mill is going. Although this sum of money is significant, it comes no where close to a complete redo of a stadium.the age and condition of Memorial.

1] Lowering the playing field and extending stadium seating much closer to the sidelines.

2] Addressing the "wasted" space at the field area beyond the north end zone where the track curve used to be.

3] Refacing and repairing the facade of the entire stadium exterior.

4] Addressing the grounds around the stadium - more parking, landscaping, benches and possibly a sculpture park of KU Football Greats [after the past decade or so that almost seems like an aximoron ]. Still we need to emphasize that football greatness has been seen in this stadium.

6] A possible "Lew-Perkins" type vertical extension on the East stands of Luxury Boxes and Party Rooms.

7] Maybe a Football Hall of Fame similar to the Allen Field House concept only strictly football.

8] I know this one is controversial but consider selling beer for the games.

9] State of the Art Game Day Locker Rooms for both teams.

10] Somehow address the atmosphere of the access areas below the stands. Murals, graphics, banners, draped and colored decor....anything to mitigate the feel that you are in a giant basement or a factory.

12] And, of course, the absolute must for any stadium upgrade......a much better product on the field.

I would have as #1 to widen the seat foot prints (or is that "butt prints"?). Ticket buyers are not sardines!

Personally, I'd love to have a beer and a brat at a KU game. Heck, why not serve gourmet snacks with a full bar? Just ensure there are ample security guards to usher out the lushes.

Good points Tony. I think numbers 1 and 2 are the most important. Getting fans closer to the field improves the experience for the fans, the players and the TV viewers.

And I love the idea of the sculpture park. We have plenty of KU Football Greats. I'd start with Don Fambrough, Pepper Rogers and Fielding Yost. Then Gale Sayers and John Hadl.

Who else would you include in the sculpture park/hall of fame?

Too early for Todd Reesing? He did have a great career for us. Maybe Aqib Talib and James McClinton as well.

Is it the chicken or the egg? I would argue it takes both and right now is the time with the football program finally looking legit. Raise the money and build it.

One more suggestion, Eminent Domain all the land north of the stadium all the way to 9th street and put in a parking lot. I'm sure the property barons of Lawrence will understand.