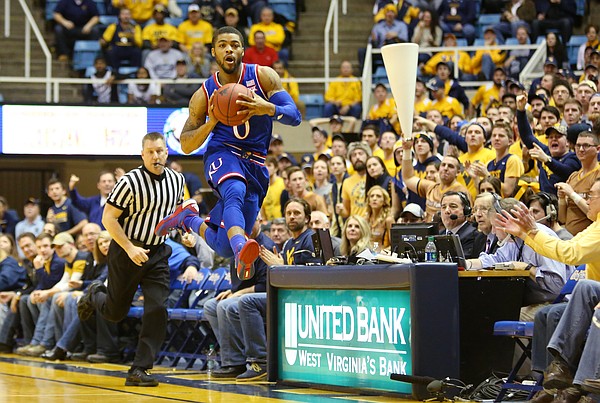 Kansas guard Frank Mason Jr., (0) jumps to make a cross court pass and break a press in a game between the Jayhawks and the Mountaineers at the WVU Colliseum in Morgantown, W.V. Tuesday. by Mike Yoder

It hasn’t mattered who was on the team, what the rotation looked like or how deep and talented the Kansas men’s basketball team has been.

Almost every year, without fail, there has been a small but impactful stretch, usually during conference play, when the Jayhawks have struggled and KU fans has questioned what in the heck was going on.

Last year, a team that gave eventual national champion Villanova an absolute street fight in the Elite Eight lost three of five games during mid-to-late January, all on the road and all by double digits.

One year before that, the Jayhawks lost three of six, including twice in a seven-day span, before bowing out of the NCAA Tournament in the second round.

And three seasons ago, the Jayhawks lost three of four early in the season — including back-to-back games at Colorado and Florida — and finished the season losing two of their last three to close the regular season and four of its final seven overall.

Heck, even the 2007-08 team, which finished 37-3, dropped two of those three in a 12-day span in February, right around the time when you want to start building momentum for a postseason run.

Before we tip things off for Game No. 2 of 18 in the Jayhawks’ quest to make that 13 straight — 8 p.m. tonight vs. Kansas State at Allen Fieldhouse — let’s just take a moment to accept and embrace that this team is probably going to have its rough patch, too.

If you’re the type of fan that would rather know when these stretches are coming instead of being blindsided by a loss you never expected, continue reading.

The Jayhawks’ conference schedule this season is pretty well set up, with KU two in a row on the road just one time — Monday, Feb. 6 at Kansas State and Saturday, Feb. 11 at Texas Tech. Back-to-back home games ease the Jayhawks into that doubleheader and a follow-up home game against West Virginia sits on the back end.

But it’s that fairly lengthy period, beginning Jan. 16 and ending Feb. 18, that actually presents a couple of stretches in which the Jayhawks could be bitten by the loss bug more than once.

The first and most obvious stretch is a five-game run that starts in Ames, Iowa, includes road games at West Virginia and Kentucky (not a Big 12 team, but still) and ends with Baylor at home on Feb. 1.

Tom Keegan wrote Monday that Baylor and West Virginia pose the biggest threats to KU continuing its Big 12 title streak, so having to play one of them away and the other at home around the same time as the always-tough trip to Iowa State and an unknown journey to Kentucky very well could present the Jayhawks with their toughest challenge of the season.

Right after that run is another sequence that features three nasty games in a four-game stretch, with the fourth and seemingly easiest game of the group still coming on the road.

KU plays at K-State on Feb. 6, travels to Lubbock, Texas, to take on Texas Tech five days later and follows that week up by hosting West Virginia and traveling to Baylor.

There’s no way the Jayhawks will lose all of those, but a case could be made for dropping two or perhaps even three of them, especially because West Virginia seems, at least to me, to be the Big 12 team most poised to come into Allen Fieldhouse and leave with a victory.

Don’t worry. I’m not predicting doomsday for the Jayhawks here. I still think they’ll go undefeated at home and I also still think they’ll win the Big 12. The biggest reason? It’s not because Baylor and West Virginia aren’t worthy challengers but more because of the overall strength of the league and the much higher likelihood of Baylor or WVU slipping up in a game they shouldn’t instead of Kansas doing the same.

Either way, it should be a fun couple of months and if you’re one of those KU fans that doesn’t handle losses very well, keep an eye out for the two stretches in the schedule that I mentioned above.

Your opinions make much sense and surely suspensions or injuries could determine results. I am some what impressed with the WVU full court pressure they seem to have it organized quite well. Just a little amount of practice before playing them might be a problem. Mason better be prepared to pass the ball down court when they double team the dribbler.

Until proven otherwise, I'm sticking to Kansas winning out this season to finish at 39-1 with the 13th Big 12 and Self's second National Championship. This team has the unique combination of talent, experience, desire and intelligence. Enjoy the ride.

As long as we're predicting - I'm unfortunately not quite as optimistic. Rebounding, insufficient inside depth, and difficulty guarding a post-up 4 are chinks in our armor, even though our perimeter game is as good as anyone's. It's also absolutely vital that Mason and Jackson are healthy for the big games, which is not guaranteed. I would go with 4 losses before the tournament coming at WVU, BU, Kentucky, and either ISU or OSU. 15 - 3 in conference would still be great and would probably be a 1 seed. Then - roll the dice.

At this point any predictions are pretty much up in the air. I certainly hope that Suzi is correct and Nick is wrong. Either could happen. It could even get worse. I'm optimistic that things will go quite well for our team. As well as Jackson is doing, I'm sure he will get better. It appears that Lucas has found his way and has become the consistent we need. Hopefully Bragg and Vick will improve. No doubt Self will get better defense out of the team which will help. Deep foul trouble is probably the biggest concern or just a really bad game(s). We've now won two conference games in which we didn't really play our best. Maybe, just maybe, we are getting our bad games out of the way early, and yet still winning. I'm not a chicken little, I like to err on the optimistic side.