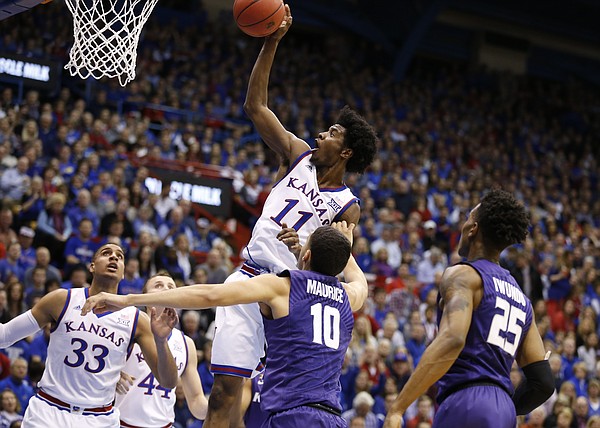 Kansas guard Josh Jackson (11) comes in with a put-back bucket against Kansas State during the first half, Tuesday, Jan. 3, 2017 at Allen Fieldhouse. by Nick Krug

They scored 52 points in the first half and, somehow, led by 10 after the Wildcats shot 54 percent from the floor and 50 percent from three-point range during the same 20-minute period. It’s to the point now where it’s newsworthy if the Jayhawks’ offense isn’t an A.

The Jayhawks had plenty of opportunities to bury the Wildcats but kept letting them off the hook by breaking down against dribble penetration and good ball movement. KU did grind out just about every possession and that saved them from getting a C-minus here. Some of the credit for this effort has to go to K-State's players for being absolutely fearless all night.

Lucas was so good yet again (18 points and 12 rebounds) and delivered some of his biggest buckets and rebounds when the Jayhawks needed them most.

Jackson was sensational in the first half and Frank Mason was Frank Mason. But the big bucket came from Sviatoslav Mykhailiuk at the buzzer and the Jayhawks would’ve been blown out of not for their backcourt. Such is life.

Vick and Bragg were merely average — good moments mixed with bad — and Lightfoot did not play enough to factor too heavily into this grade.

As Fran Fraschilla said "It's sort of a twilight zone part of the game for the officials."

I agree and disagree. KU's inability to finish around the rim and poor free throw shooting is a real concern. Their defense is just bad at times and average at best. They seem flat footed and slow to react. For a team that has so much talent, the bench is a real problem that will have more of a negative impact the further they get into conference play and March. Lucas is making improvements in the frontcourt, but the lack of depth at the 4 & 5 is going to be a problem. KU is scrappy, but without a rim protector they're going to struggle against teams like Baylor who have a real presence in the paint. The KSU game should be a wake up call. They are a good team, but it should not have been that difficult to put that game away. I still think that if KU had made their free throws and finished with authority under the rim or above the rim, that game still could have been won in convincing fashion. They're going to need to find a way to win big games even when they're not shooting 50+% from 3-point land...and that concerns this fan. RCJH!

agree 100% with everything you said David.