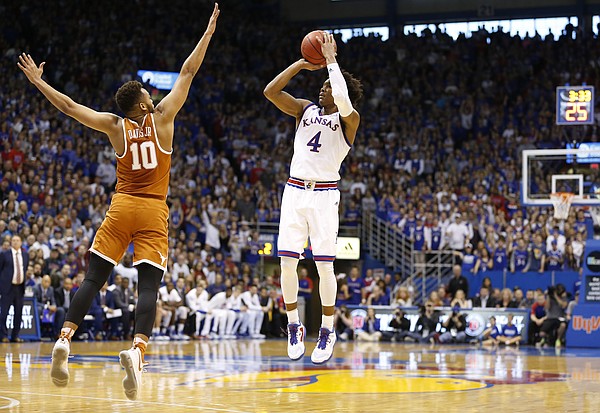 Kansas guard Devonte' Graham (4) lines up a three over Texas guard Eric Davis Jr. (10) during the first half, Saturday, Jan. 21, 2017 at Allen Fieldhouse. by Nick Krug

Quick grades for five aspects of KU’s 79-67 victory over Texas on Saturday at Allen Fieldhouse.

They didn’t shoot it well — other than from 3-point range — and labored in the halfcourt while too often settling for bad shots. The three-point shooting and hot start was enough to carry KU to victory, but this was not one of their better offensive games.

The Jayhawks’ defense out high, guard on guard, was actually pretty good throughout the game but Texas got too many good looks off of offensive rebounds (11) and from three-point range. Beyond that, UT out-shot Kansas 46.7-41.2 in the first half.

Lucas did enough inside to grab 14 rebounds but he was a non-factor offensively and once again got little help against UT’s big bodies. Bragg was decent offensively but so many of his buckets were off of plays made by teammates.

Graham was great in the first half but quiet in the second. Mason found his touch in the second half and helped lead KU to victory but had a quiet first half. Everyone else kind of fell in line behind that, with the other three making as much noise for their turnovers as anything else.

Bragg had some decent moments but equally as many bad moments. Vick did not shoot the ball well and turned it over. And Lightfoot, though solid, was only out there for 4 minutes.