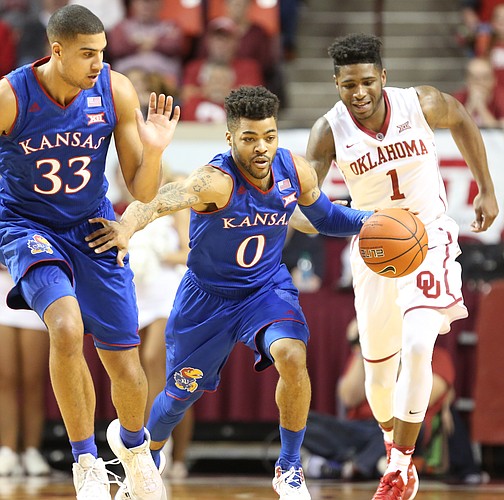 Quick grades for five aspects of KU’s 81-70 victory at Oklahoma on Tuesday night.

It might be best to break the grades for this game into two halves and would be fairly easy to do — F for the first half, A for the second. KU’s offense, which missed 14 of its final 17 shots in the first half, was lights out to open the second and looked much more like the Kansas offense we’ve become used to seeing, fast, free, unselfish and scary.

The Jayhawks battled in both halves but looked much better — and played with more of a purpose — in the second half. The Sooners got whatever they wanted at times in the first half and out-toughed the Jayhawks on the glass.

This one’s all Lucas and he was darn good. 10 points, 13 rebounds and all kinds of effort. He’s still limited in some ways, but does what he does best as well as anybody.

Mason’s the man. What more needs to be said? He finished two points off of a career-high and knocked in 11 of 19 shots and 5 of 6 from three-point range. Jackson, Graham and Mykhailiuk chipped in 38 points to back up their leader.

Vick and Bragg did little and Lightfoot and Coleby weren’t in long enough to do much. When they were, though, neither player looked all that comfortable or impressive.

It seemed coach Self, with an early lead, tried to get some reserves minutes to bolster confidence. That sure as hell backfired. Resigned to just pick up a road win tonight and worry about Vick, Bragg, Coleby, Lightweight another time.

That time will certainly come at critical times the next two months, and may the basketball gods be kinder to our 'Hawks than Mountaineers were to Bears earlier tonight.