Senior Night at Kansas special for underclassmen too 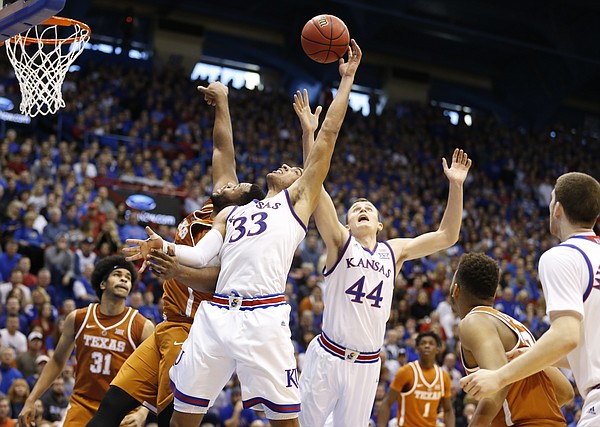 Kansas forward Landen Lucas (33) gets up for a rebound over Texas forward Shaquille Cleare (32) during the first half, Saturday, Jan. 21, 2017 at Allen Fieldhouse. At right is Kansas forward Mitch Lightfoot (44). by Nick Krug

Senior Night at Kansas is a special event.

The memories live for lifetimes, the photos are a part of history and the framed jerseys and pictures that are presented to each player often hang on their walls well into their adult lives.

But it’s not just the seniors who Senior Night means something to. Of course it’s special for the fans, families and coaches of those Jayhawks being honored. But it also means something to their teammates, some of whom are taking notes for when their big night rolls around.

Freshman forward Mitch Lightfoot is one of those players. After immersing himself in everything Kansas basketball from an early age — and all over again in a whole different way this season — Lightfoot is looking forward to being one of the thousands of people clapping and honoring KU seniors Landen Lucas, Frank Mason III and Tyler Self following tonight’s 8 p.m. game against Oklahoma at Allen Fieldhouse.

“Those guys have been incredible inspirations for me,” Lightfoot said.

Specifically, Lightfoot was asked what he would remember about his time with Mason and Lucas, two of KU’s unquestioned leaders this season who have introduced Lightfoot into the culture of Kansas basketball.

Although the 14-man Kansas roster has allowed Lightfoot to learn a lot of things from a lot of people during the past nine months, the lessons he has taken from Lucas, who plays the same position, have been life-changing.

“Learning from him, just being humble, rebounding the heck out of the ball and defending the other team’s best big every time,” Lightfoot began. “I’m kind of in the same position as he was. The guy paid his dues before he (got) his time to shine and, obviously, he’s shining right now.”

In an era of one-and-done players dominating headlines, transfers taking place at record-setting rates and early entries into the NBA Draft becoming more and more common, four-year players like Lucas and Mason are true commodities and more appreciated than ever.

For Lightfoot, who still has three seasons ahead of him at Kansas, getting a chance to go through a season with guys like that has been invaluable.

“I obviously see myself as being one of those Frank and Landen type of guys, who stays here the entire time," Lightfoot said. "And I’ve found some inspiration in that. They’re willing to pay their dues.”

Senior Nights Under Bill Self:

Nice article, Matt. But what do you mean by "commodities?" A commodity is something that can be bought or sold in quantity and is fully interchangeable with others of the same type – like metals, meats or oil. So by definition, a commodity is nothing uniquely special. No criticism, just curious …

Hey Tait just rings the bell with his welcoming smile. Remember definitions can have additional meanings. On another note I hope Tyler scores on his first shot the fans will go wild. Lots of diifferent meanings for wild.

Try definition number 2. Many words in the English language have multiple meanings, some of which are barely, if at all, related.

Commodity - 2. something of use, advantage, or value.

And I believe this should explain it. Lucas and Mason are certainly of use, something that provides the team with an advantage, and because such athletes are so rare, they are of great value to the team.

I am looking forward to watching Lightfoot in the future. I think this guy has great potential and his attitude is right to make that happen. Just spend lots of time with Hudy, Mitch!

Hey Tait! Is Landon eligible to transfer and play as a graduate like Tarik Black, or did the Red Shirt make that not possible? Thanks

He's used up his eligibility. He's a 5th year senior - which includes his red shirt year. Tarik graduated in 3 years at Memphis so he still had a 4th year. Because he'd already graduated he didn't have to sit out the transfer year.