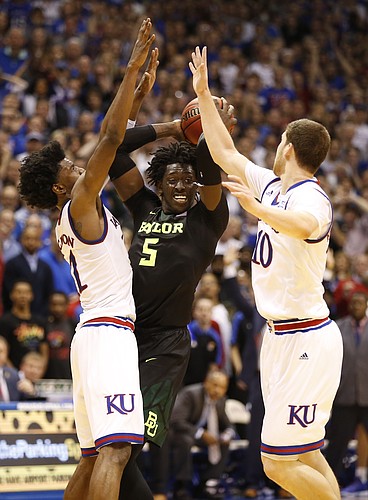 Quick grades for five aspects of No. 3 KU’s 73-68 victory over No. 2 Baylor Wednesday night at Allen Fieldhouse.

Putting 73 points on the board is only going to win games if your defense is good enough to allow that to happen. It was in this one and KU’s 45 percent shooting from 3-point range and four players in double figures provided just enough offense.

This very well might have been KU’s best defensive game of the season and it certainly was the Jayhawks’ most impressive close to a game on the defensive end. Kansas was tough, intense, scrappy and turned up. You could tell that getting stops meant something to these guys tonight.

Landen Lucas was not great early, but delivered late and also came away with a game-high 11 rebounds, four on the offensive end. Add to that the fact that the 11 minutes that Kansas got from the combo of Dwight Coleby and Mitch Lightfoot delivered 2 points, 7 rebounds and 2 blocks and you’re looking at a group that, though still not ideal, is starting to show small signs of improvement.

Frank Mason III was clutch, Josh Jackson was spectacular and Devonte’ Graham and Svi Mykhailiuk combined to make 6 of 11 3-pointers. All four also played 34 minutes or more and, yet, still delivered time and time again.

Lagerald Vick gave the Jayhawks very little and continues to struggle, but Coleby and Lightfoot may be starting to find where they fit on this team. Take the good with the bad, I suppose.

Toughest around seems overstated – but for one game, it was tough enough! These guys get better all season at pulling up from inside their well of talent more effort than we thought they had remaining. Believing the result will follow from that effort gives every Jayhawk – coaches, players, fans – what we call "tradition" and so many victories it gets harder all the time to keep count.

I hope KU Athletics produces a CD of all the conference games this year.

They are making turnovers now, very evident in Kentucky game and now this. This is what needs to happen when size is not to your advantage. The differing defensive looks I am liking a lot. Baylor got some open shots, but when you're as good as they are, they will get some of those, it's going to happen. But it didn't happen very much.

JJ is really becoming a monster on the offensive end where we need him to be. When you're that quick, the criticality of a play from post to someone in the paint gets mitigated, especially when LL is your only true big man available.

Coleby is a solid body in there. But you can tell he has no explosion off the floor. And yikes, his offense is rough. He had a couple real ugly attempts under the basket. Not that we need him to score points, but between him and Mitch, a few buckets underneath would be huge.

Lucas' offense wasn't great as noted, but that shot he made inside when he went up strong under 2 minutes was huge. That coupled with him bolting down court and altering that Baylor 3 point attempt were two game savers IMO

I wonder how much Vick is being effected by all the media garbage? It seemed that he lost some confidence (started thinking too much?) back in December (?) but it would seem that the reporting would be weighing on him. I would never expect him to say anything along those lines but the game is more than just what goes on between the lines. Even just sleeping well or not can effect peak performance.

I would probably give offence a B+ or an A-, granted 73 is not a lot of points in a Big XII basketball game, but it's 12 more points than the average Baylor has allowed this season. There's only one Big XII team that's not averaging 75 or more points per game, so for Baylor to hold teams to a 61 point average (all games) and KU to hang 73 on them is a good performance.