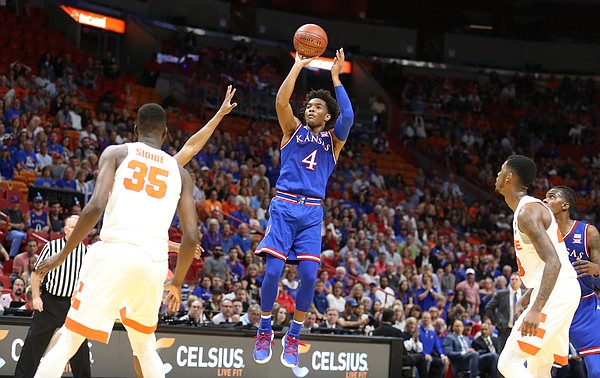 Kansas guard Devonte' Graham (4) pulls up for a three during the first half, Saturday, Dec. 2, 2017 at American Airlines Arena in Miami. by Nick Krug

Syracuse coach Jim Boeheim said after Saturday's 76-60 loss to No. 2 Kansas in Miami that he heard, on more than a few occasions, that the Orange would not fare well playing their signature 2-3 zone defense against the Jayhawks.

But while Syracuse did, in fact, fall to the Jayhawks — in game which the Orange led for just 2:15 and not at all for the final 27:54 — Boeheim was quick to point out that it was not KU's 3-point shooting or the struggles of Syracuse's zone that cost his team.

“Overall, we did a good job on their shooters. I mean, really, except for (KU senior Devonte') Graham,” said Boeheim, noting that KU players not named Graham shot just 4-of-18 from 3-point range. “They shoot 35 percent from the 3 (11-of-31) and they (were) shooting 47 coming in here.”

Graham, of course, more than made up for the off day from his teammates, connecting on 7-of-13 triples himself en route to a career-high tying 35-point outburst that carried KU to victory.

But even his 54 percent clip from deep was more about big time shots made by the KU senior than a failure by the Syracuse defense, according to Boeheim.

“We believe we can stop people from the 3-point line if we play our defense properly,” he said. “It's interesting that Kansas was shooting 47 percent against six teams that played man-to-man. But everybody says, '(You) can't play zone.' Well, obviously you can't play man-to-man either. People don't get that.”

So many of Graham's 3-point makes came from well beyond the 3-point line and in nearly the same spot above the top of the key.

When asked after the victory why he found room to shoot in that area, Graham unknowingly added support to the Syracuse coach's claim.

“That's just what they're supposed to do,” Graham said of the way Syracuse defended the Kansas offense. “When we run our 2-3 zone, when the ball goes to the middle, we fan out. You have to leave someone open, and it's usually the guy at the top. I was just trying to stay ready to shoot the ball.”

Each long-range bomb that fell softly through the American Airlines Arena nets brought serious energy and momentum to the Kansas bench and crowd and had the opposite effect on Boeheim and the Orange.

Even with that, Boeheim, somehow, was asked after the game if he was “happy with the defense you guys played on Devonte' Graham.”

“He got 35,” Boeheim said. “I guess we weren't too happy with that. ...This would've been, I think, a fairly close game if we would've shot a little better. But Kansas is a tremendous team.”

And a rulebreaker. And a enabler of pedophiles.

Very astute comment: "It would have been a close game if we had shot better." Wow.

Yeah, to me it sounds like... superb D beats better shots.

Can you explain why the solution for Preston is taking ages. He either is eligible and if not surely evidence is available. His Mom visiting hope she can get it settled.

Because mom wasn't able to gett o town with records of how she bought/leased such a nice car for her son?