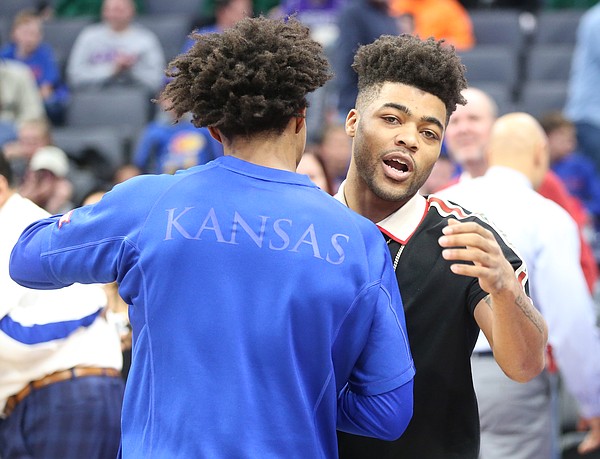 Sacramento — Sure, Thursday's Kansas-Stanford game was about the Jayhawks trying to close out the non-conference portion of their schedule on a high note, taking some momentum into the holiday break.

But in reality, it turned out to be all about Frank Mason III.

Mason, the reigning national player of the year who starred for Kansas a season ago and now is off to a terrific start to his rookie season in the NBA with the Sacramento Kings, was the featured guest of sorts during KU's 75-54 victory Thursday night.

I'll admit that I spent more than a little time Thursday wondering just how Mason was going to handle watching his old team play a game without him on Thursday night at Golden 1 Center, Mason's new NBA home in Sacramento.

It's not that Mason had not seen the Jayhawks (10-2) play a game without him already this year. He had. And he gets into it while watching on TV and sharing his thoughts on Twitter.

But it's a whole different thing to see your old teammates, who you battled and bled, cried and cracked with, actually playing in person right in front of you, just nine months after you were in that same uniform with him.

But like just about everything else in his life, Mason handled it like an absolute pro and even flashed even more of his ever-evolving personality while doing so.

“I think so,” said KU coach Bill Self when asked after the game if he thought Mason enjoyed being back around his old teammates. “I just had a chance to talk to him in the locker room. I said, 'How's life?' He said, 'Life is great, coach.' I said, 'Is it better than it was in Lawrence?' And he said, 'It's great, but it's not better than it was in Lawrence. But the pay is different.'”

Sitting at mid-court, dressed in all black and bright red shoes with family members flanking him and Kings teammates Buddy Hield and Harry Giles nearby, Mason took in every bit of the action the way many KU fans do on a regular basis.

He clapped when things went well and slapped his hands together — different gestures — when they didn't. He hopped out of his seat when a big shot soared toward the rim and often turned skyward to the massive video board that hung above the court to catch a replay of a particularly pleasing highlight.

In the first half, during the second television timeout, Mason made his way from his seat to the ESPN broadcast table to spend a few minutes on the air with the play-by-play and color guys. On his way, he stopped to fire T-Shirts into the stands and even peeked into the KU huddle for a quick second.

Remember, this was during the game. Good thing, too, because that was the one thing that forced former Mason running mate Devonte' Graham (14 points, 6 assists) to stay locked in instead of clowning around with his old pal.

Mason's mother and son have moved out to Sacramento to be closer to him and he clearly has adjusted quickly and fully to life in the NBA.

“He's doing great,” Self said. “And I think the Kings people absolutely love him, from what everyone we've talked to (has said). They've been very high on him.”

The crowning achievement for Mason on Thursday night came during a halftime promotion that pulled spectators out of the stands to shoot half-court shots to win gift cards. After a few rounds of the seven or so competitors coming up short, Mason hopped out there and tried himself. After missing his first five or six attempts, Mason drilled his last one.

Nothing but net. Gift cards for everybody.

It was that kind of night for the former KU great and it ended in KU's locker room, with Mason giving his assessment of Self's current squad with that bulldog mentality he became known for during his playing days in Lawrence.

“He was addressing the team,” Self recalled. “I asked him, 'What do you think of the guys?' and he said, 'Well, we could be a lot more aggressive on both ends, but especially defense, coach.'”

Frank is awesome, I loved hearing his reactions to the game when the announcers we're interviewing him, he's still a Jayhawk through and through.