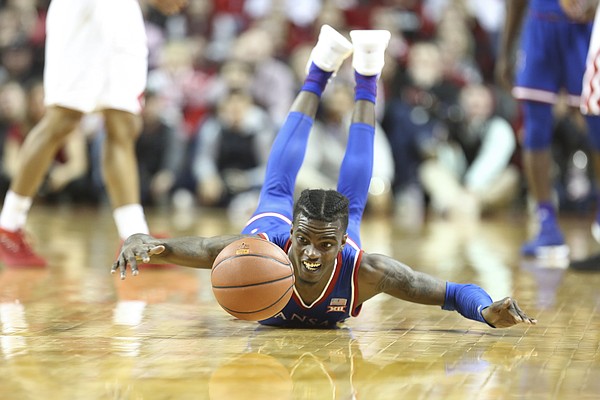 Kansas guard Lagerald Vick (2) lays out for a loose ball during the second half, Saturday, Dec. 16, 2017 at Pinnacle Bank Arena in Lincoln, Nebraska. by Nick Krug

Quick grades for five aspects of KU’s 73-72 squeaker over Nebraska on Saturday night at Pinnacle Bank Arena in Lincoln, Neb.

This was a half-court game with a lot of jump shots and very few fastbreak points or free throws for either side. Still, Kansas got the better of the Cornhuskers in both of those areas — 4-2 in fastbreak points and 8-6 in free throws — and that helped offset NU's better shooting night and higher number of 3-point makes.

The defense was markedly better in terms of effort and intensity, but the Jayhawks still gave up far too many buckets on drives to the rim and also allowed Nebraska to flirt with 50 percent shooting at 49.2 percent for the game. But on effort alone, the Jayhawks were much better in this one than in either of their back-to-back losses, which not only led to a passing grade but also to victory.

A career night of 26 points, 10 rebounds and one huge block for Udoka Azubuike when KU absolutely had to have him and an underrated night for sophomore forward Mitch Lightfoot, who did all of the things he's supposed to do and did them well.

Svi Mykhailiuk's clutch 3-pointer that proved to be the game winner stole the show, but Devonte' Graham's steady and solid night and Lagerald Vick's quality all-around effort were just as important. With that said, Malik Newman, Marcus Garrett and Sam Cunliffe combined to go scoreless in 49 minutes and that kept things in the B range.

Lightfoot was good but not incredible, Garrett had his moments of ups and downs and Cunliffe played just two minutes in his Kansas debut. It worked Saturday, but the Jayhawks are going to need more from their bench at some point.

Lightfoot needs to get used to receiving a pass. He’s ok defensively but so freakin frustrated to watch on offense. So easy to panic, wasn’t ready to attack, wtf?? Graham will not pass to him if he doesn’t trust Mitch. That’s understandable - Mitch almost lost the ball every time Graham dished a pass to him!!! The guy needs a very intense coaching - one on one coaching!!! He’s so behind offensively especially when ball is moving quick. He can shoot jumpers but that chance is slim in most games. Unless coach is trusting him to do that. We need - seriously need help on offense. That’s the only way to compensate our lack of stingy D. Our guards haven’t been productive in the perimeter area; gotta keep feeding the bigs. Higher percentage at least!