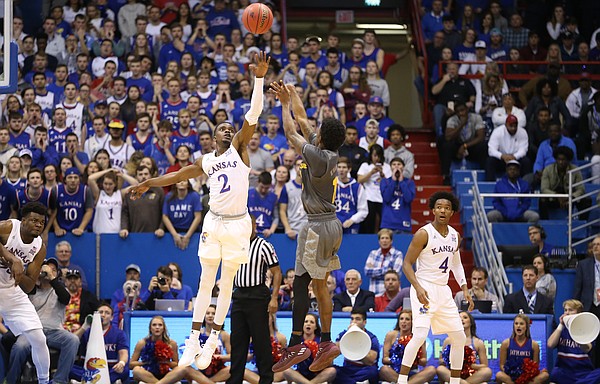 Quick grades for five aspects of KU’s 95-85 loss to No. 16 Arizona State on Sunday at Allen Fieldhouse.

The Jayhawks shot 48 percent from the floor and looked much more aggressive attacking the rim and finding their offense. And they were terrific early, particularly Devonte' Graham. The problem was, ASU put so much pressure on Kansas with its offense that the shots the Jayhawks did miss came at crucial times and proved to be massive blows. Turnovers also were a big, big problem.

Outside of the first few minutes and a couple of desperation possessions late in the second half, the Jayhawks were exposed in just about every way, defensively, in this one. KU's guards could not contain the Arizona State guards on the drive and gave up good looks from 3-point range. And there was next to no inside presence. Both are problems that already have haunted this team and will continue to do so unless the Jayhawks make major improvements quickly.

Udoka Azubuike struggled most of the day. Even though he made six of his seven shot attempts, Kansas almost never was able to throw the ball to him inside and the 7-footer struggled on the glass and to be any kind of defensive presence. Mitch Lightfoot did what he could to be a factor and had a couple of good moments, but he does not bring enough to the table yet to overcome an off day from Azubuike.

Considering half of this grade is for offense and the other half is for defense, the Jayhawks had very little chance for a high grade no matter how good their offense was. And it, too, was not great. Graham did what he could to be much better than he was against Washington, which helped, but none of the KU guards did much in the second half and none of them had any kind of consistency.

Lightfoot grabbed five rebounds and blocked a couple of shots in 18 minutes. And Marcus Garrett, whose early-season confidence has disappeared of late, did next to nothing in his 15 minutes. KU definitely is missing a spark off of the bench of any kind and not only needs these two to elevate their play but also to get a notable contribution from soon-to-be-eligible guard Sam Cunliffe.

Kansas shut down by Arizona State guards by KUsports.com

Devonte' Graham after loss to Arizona State: 'Their guards were just better than us' by KUsports.com

Bill Self: 'This is the softest team Kansas has had since I've been here' by KUsports.com

Udoka Azubuike on KU's problems in loss to Arizona State by KUsports.com

More news and notes from Kansas vs. Arizona State

It's time for Graham to call Franky. Get some advice. Go do it before it's too late, 'Tae!

Defense will be the downfall for this team..they have enough talent on offense to score, but if they cant stop anyone then its pointless....various zone defenses should be in their future...seems like the only way they can contain opposing guards....defense is usually a KU strength...it will be next season for sure with the size we will have, but this season, it will lead us to more losses than we are used to and a probable 1st weekend loss in the NCAA